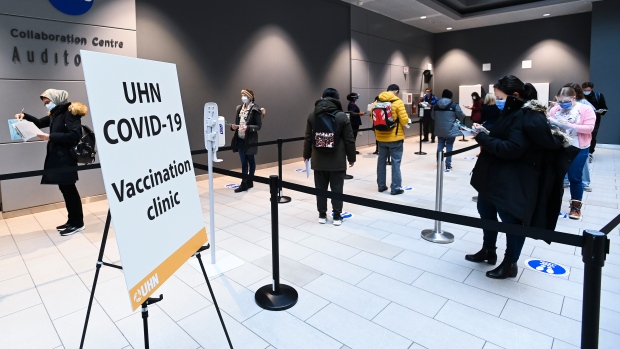 TORONTO — As thousands of front-line workers remain susceptible to COVID-19, a surprising group of people has been vaccinated ahead of them.

Among the less than one per cent of Canadians immunized against the novel coronavirus, those who have received vaccinations include researchers, public relations executives and hospital staff on leave.

Despite the insistence from health officials that the scarce vaccines would first be reserved for the highest-risk populations, including health-care workers in COVID-19 wards and in long-term care homes, staff who have little to no interaction with patients have already received the jab.

Last week, a PR executive at a health centre in Ontario tweeted a picture of himself getting the shot, a story which set off a slew of condemnations on social media, some users calling it a “shameful” kind of “queue jumping.”

As of Monday afternoon, about 339,000 Canadians had received at least one dose of a COVID-19 vaccine, or just 0.892 per cent of the population.

In the weeks leading up to Health Canada’s approval of the Pfizer-BioNTech and Moderna vaccines, much was made about who would be first in line, with each province developing its own standards based on federal guidelines. But since the rollout began nearly a month ago, officials have faced criticism for a slow pace getting needles into arms.

The need for speed may be playing a part in why lower-risk people have already been vaccinated, says infectious diseases specialist Dr. Anna Banerji, who’s not surprised Canadians are upset about so-called “queue jumping.”

“It bothers a lot of people who are working at high-risk in emergency departments … because it doesn’t seem fair,” she told CTVNews.ca over the phone.

But it may be too late to tackle the logistics of “weeding out” certain staff from large hospital networks attempting to inoculate more people more quickly, she said.

“When you’re trying to get the vaccine out as soon as possible there are probably people that are at lower risk that are going to end up in the line up. You can try to [appeal] to people’s best nature to say people at the highest-risk should come in first,” she added.

But once they’re out of the freezers and thawed, the Pfizer and Moderna vaccines need to be used the same day, so some health centres administering shots have resorted to mass email sign-ups.

In Toronto, the University Health Network, which controls the largest swath of vaccine doses in Ontario, recently opened its vaccination program to staff outside its immediate network to include the Hospital for Sick Children, Canada’s top paediatric hospital.

Last week, staff at SickKids were encouraged to register for a time slot at a web link provided via e-mail using specified log-in credentials, a staff member told CTVNews.ca. Among those who signed up and got a Pfizer dose were research staff and nurses at home on maternity leave. Later that week, the hospital network ran out of doses.

On Sunday, UHN sent an email about a new round of vaccines available at a nearby health centre, encouraging staff to register. In a tweet three days earlier, UHN President and CEO Kevin Smith said the network was in urgent need of vaccines, a message that spurred one Ontario emergency physician to question the network’s efforts to vaccinate non-priority staff.

“Please tell me you didn’t urgently need vaccines to vaccinate clerical staff and researchers while your frontline colleagues in the community seeing COVID every day have yet to see a dose,” wrote Laura Shoots, the director of ER Quality Improvement at Brant Community Healthcare System.

In an emailed statement to CTVNews.ca, a spokesperson for the UHN said that the network opened its vaccination program to “patient-facing” staff but that there “is no master list of patient-facing individuals” at the five hospitals that are part of the vaccination efforts.

“Individuals who are not patient facing or are working from home have been asked to wait. We know that some people have chosen not to wait, which is unfortunate,” wrote Gillian Howard, vice president of UHN Public Affairs and Communications.

‘NOTHING IS GOING TO BE PERFECT’

Less than a month into the mass immunization effort, infectious disease expert Dr. Zain Chagla says he’s willing to give some leeway to hospitals tasked with vaccinating hundreds of thousands of front-line staff.

“I give the institutions a little bit of credit,” he told CTVNews.ca on Monday. “It’s incredibly hard to try to interview, prioritize, deal with, work through every individual they think needs the vaccine.”

In hindsight, it would have been appropriate for institutions to develop a prioritized list of staff, he said. In the absence of such a list, the email registration system might be more suitable than attempting to triage staff on the go.

“Leaving it to the honour system is the better way,” he said. “But recognizing that when you ask people their risk, they’re going to put themselves at higher-risk knowing what comes from [the vaccine].”

The difficult storage requirements of the Pfizer vaccine may have played into the inability to vaccinate large groups of people outside urban centres, said Chagla. But as more vaccines arrive in the coming weeks, there may be more opportunity to vaccinate the high-risk people officials always intended.

“Maybe it’s the time to invite another high-risk group into the clinic to get vaccinated that isn’t affiliated with the hospital. Or a region around the hospital in a smaller rural setting,” he said.

“Nothing is going to be perfect,” he added. “There is something to be said about some oversight into how hospitals are administering their vaccines.”