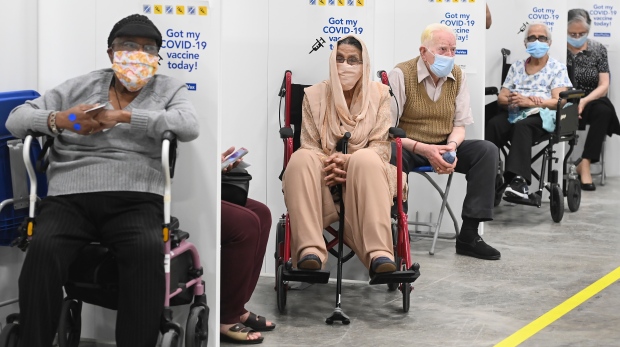 Those who are over the age of 60 or immunocompromised are especially at risk for severe COVID-19 disease. As provinces across Canada ease more of their pandemic-related restrictions, there are concerns that COVID-19 transmission could increase, which may lead to a rise in infections, particular among those most vulnerable.

Public health officials and experts continue to recommend that Canadians get their primary vaccine course and booster shot if they haven’t done so already. Studies have shown the efficacy of these vaccines in protecting against COVID-19-related hospital admission and death.

When it comes to the need for a fourth vaccine dose, while data remains limited, early research suggests there are benefits for those who are immunocompromised, said Dr. Rupert Kaul, director of the division of infectious diseases at the University of Toronto.

“If you probably have not responded well to earlier vaccines, because you are immunocompromised in particular… it probably is a good idea to be getting a fourth dose of the vaccine,” he told CTVNews.ca on Wednesday in a phone interview.

Canada’s National Advisory Committee on Immunization (NACI) currently recommends that those who are immunocompromised should receive a fourth dose of the COVID-19 vaccine, although different provinces have applied somewhat different variations of these guidelines.

For those who are immunocompromised, the body is unable to produce a strong enough immune response when confronted with the SARS-CoV-2 virus, said Kaul. Vaccines induce immune responses by activating the body’s T-cells, which work to target and destroy virus-infected cells, as well as B-cells, which produce neutralizing antibodies to protect against infection, he said.

Those who are immunocompromised struggle to mount an immune response to the virus in the first place, either as a result of a transplant they have had, underlying medical conditions such as cancer, or treatments they are receiving that hinder their body’s immune response, such as chemotherapy. This makes those who are immunocompromised much more susceptible to infection and severe disease, said Kaul.

In the elderly, there’s also the occurrence of immunosenescence, said Dr. Shahid Husain, an infectious disease specialist with the University Health Network based in Toronto. This is essentially the process of a person’s immune system deteriorating with age, he said, causing the body’s cells to lose their ability to divide and grow over time. As a result, older adults, particularly those over the age of 60, are also at increased risk of developing more serious cases of COVID-19.

“As you age, you are exposed to a lot of antigens…and at a certain point, there is the phenomenon of immune exhaustion,” said Husain. “[Elderly individuals] do not produce the same level of effector cells or antibodies or T-cells to mount an adequate response.”

NACI guidelines state that anyone who is moderately to severely immunocompromised and has already received three doses of a COVID-19 vaccine should receive their fourth dose, or second booster, at least six months after their most recent dose.

Guidelines on administering fourth doses vary slightly from province to province, however. In Alberta, those aged 12 and older who are immunocompromised with certain conditions are eligible to get a fourth dose of a COVID-19 vaccine at least five months after their third dose. The province of Manitoba’s website states that youth and adults who are moderately to severely immunocompromised are advised to receive a total of four COVID-19 vaccine doses; the third dose requires a prescription and the fourth dose should be given either five or six months after the third, depending on age.

In Ontario, immunocompromised individuals aged 12 and over can also receive a fourth dose of a COVID-19 vaccine. Those between the ages of 12 and 17 must wait at least six months between third and fourth doses, while those aged 18 and older only need to wait three months. Certain individuals in other special populations are eligible for fourth doses as well.

Part of the reason behind some of these differences in recommendations is based on the limited data currently available on the efficacy of fourth COVID-19 vaccine doses and the rate at which their protective benefits wane, said Kaul.

“The science is not that clear yet,” he said.

A small study recently conducted in France looked at whether a fourth dose of either the Pfizer or Moderna COVID-19 vaccines resulted in higher concentrations of antibodies to fight off SARS-CoV-2 in those who received kidney transplants. Among the 92 patients, there was a sharp increase in average anti-spike protein titers, which are associated with COVID-19-neutralizing antibodies, one month after receiving the fourth dose.

Overall, researchers concluded that results support a fourth dose of the COVID-19 vaccine among kidney transplant recipients, particularly those who amounted a poor immune response after three doses.

“There is some data to suggest that immunocompromised hosts, especially if you have not responded earlier, fourth doses may increase the [immune] response,” said Husain.

Still, as far as widespread data that amounts to a strong recommendation that all individuals who are immunocompromised should receive a fourth dose of a COVID-19 vaccine, Husain said that data has not yet surfaced. Another recent study out of Israel appears to show that a fourth dose of the vaccine replenishes neutralizing antibodies to levels reported after a third dose of the vaccine, but only provides a small boost in terms of protection against infection. Those involved in the study were health-care workers, with no mention of whether or not any participants were immunocompromised. The study is a preprint and has yet to undergo peer review.

Late last year, Israel announced it was starting to offer fourth vaccine doses to residents above the age of 60, as well as those considered most vulnerable, with weakened immune systems that place them at greater risk for severe disease. In January, Israel’s prime minister said a preliminary study showed a five-fold increase in antibodies in the blood as a result of a fourth dose of the COVID-19 vaccine.

Since then, other countries such as Denmark have begun to administer fourth vaccine doses to older adults and vulnerable residents. Last month, however, Danish health authorities said they were considering “winding down” the country’s vaccination program come spring; this which would include a halt to administering fourth COVID-19 vaccine doses to residents at risk of serious disease. Experts have instead cited good enough protection administered through just three doses of the vaccine.

While Kaul and Husain agree that data on fourth doses remains limited, they say it still makes sense for those who are at greater risk of COVID-19 infection and severe illness to go ahead with getting their fourth dose of the vaccine for additional protection. This is especially the case as public health measures continue to lift across different provinces, said Kaul, as he anticipates this will result in a higher number of cases.

“People who are immunocompromised, who are still at risk of getting serious infection, will be disproportionately then at risk if there’s a lot of virus circulating,” he said.

The best way to maintain protection, whether someone is immunocompromised or not, is by continuing to do what public health officials have been mandating throughout the pandemic, said Kaul.

“That’s wearing a mask, frequent hand-washing [and] avoiding people who have symptoms that could be compatible with COVID,” he said. “Those are things that people who are immunocompromised often have to do all the time, not specifically because of COVID, but because they’re worried about a number of other things in addition to COVID.”

Do you have questions about COVID-19? We want to hear from you.