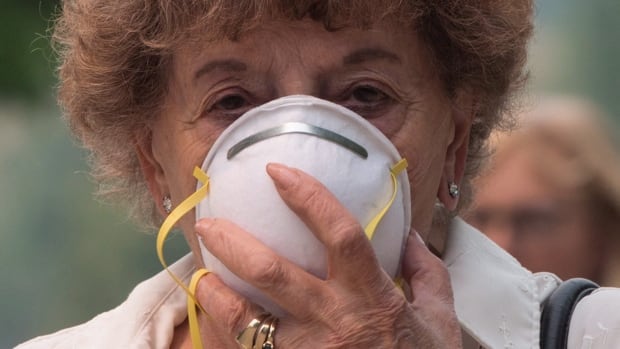 People in parts of Yukon and the N.W.T. may have noticed hazy skies and smoke this past week from a wildfire near High Level, Alta. — but what are the effects of inhaling that smoke?

She says pregnant women, the elderly, infants, smokers and people with heart and lung conditions are more vulnerable to smoke in the air.

“At a low level of air quality, they may be impacted first,” says Kandola.

Drinking lots of water to keep the mouth and nose hydrated can help. Kandola recommends using a fan or air filters on air conditioners to help get rid of smoke particles indoors. Another precaution is to avoid exercise and playing outside when it is smokey.

Long-term effects can include lung damage after exposure for an extended period of time, says Kandola.

Inhaling smoke from a wildfire can be equal to smoking a couple of packs of cigarettes a day, as the smoke is considered a “toxic soup” which can become trapped in the lungs, according to a wildfire researcher.

“One of the ways to avoid long-term effects … is try to avoid as much exposure to smoke as possible,” says Kandola.

Kandola couldn’t say whether anyone in the N.W.T. has been hospitalized this spring as a result of wildfire smoke.

People in the N.W.T. reported smoky conditions over the May long weekend, but Kandola noted the air quality alert was lifted by Tuesday morning — southern N.W.T. levels reached 2, which is “quite good.” As winds shifted, smoke from the Alberta wildfire reached north as far as Dawson City and Faro, Yukon, later this week.

Should the smoke return, people should stay indoors, Kandola warns. She advises people to check the air quality index on Environment Canada’s website for updated air conditions in communities.