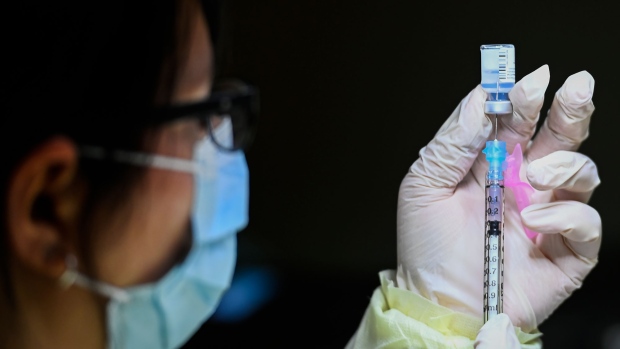 TORONTO — With just one per cent of Canadians vaccinated, and in the face of rising cases and strained hospitals, a new report from the National Advisory Committee on Immunization says provinces can accelerate the number of people being vaccinated by delaying the second dose for up to 42 days.

This would lengthen the specific waiting period between doses that has been proven to work in clinical trials for both vaccines.

The updated recommendations, released Tuesday by NACI, raise questions for Canadians anxiously awaiting the protection of a vaccine, as well as officials trying to speed up the rollout.

But the data is scarce on the impact of such measures, and scientists are split over whether they are worth the risks.

Dr. Caroline Quach, an epidemiologist and professor at the University of Montreal and chair of NACI told CTV News that it is a decision that could be made when regions “have no choice.”

“When you look at the epidemiological context where Ontario and Quebec are having huge community transmission, hospitalizations, complications, mortality, you have to wonder, do we have any data that would allow us to vaccinate more people at first,” she said.

She pointed out that the wave of cases is very high right now, pushing the need for more vaccines fast to cut down on overall transmission, even if the efficacy of those vaccines might wane due to the delay.

The two vaccines that have been approved in Canada so far — PfizerBioNTech and Moderna’s — both require two separate doses in order to achieve 94-95 per cent immunity for the patient.

These doses are spaced apart. Pfizer’s second dose is intended to be delivered 21 days after the first, while Moderna’s has a 28-day wait in between the doses.

The report from NACI says that while the ideal is to follow the vaccine manufacturers’ recommendations, people can wait longer — 42 days or so for the second dose — in order to allow double the number of Canadians to get some partial protection by receiving their first shot faster.

“We’re basically in a race against time,” Ashleigh Tuite, an epidemiologist and mathematical modeller with the University of Toronto, told CTV News. “And so the quicker we can get people vaccinated, the better.”

She pointed out that the need for fast immunization of the population is even more important in the wake of the news that the more transmissible U.K. variant of the novel coronavirus is in Canada.

Canada currently has almost 80,000 active cases of COVID-19, and more than 6,000 new cases were reported today. In a worrying trend, hospitalizations are also high, and long-term care homes are coming under fire again.

“Based on the data that we have on the vaccines, a week or two or three week delay in [doses] is unlikely to cause us a huge problem,” Tuite said. “And if anything, it’s still preferential to focus on getting those first vaccine doses in arms.”

It’s a plan endorsed by the World Health Organization, which said people can wait up to six weeks between doses to broaden coverage, with both the U.K. and the U.S. now releasing stored doses.

But some scientists warn that relying on partial immunity and delaying the second shots may lead to viral mutations and inadequate immunity.

“The efficacy is likely not to be as high as we stretch out the time between the first and second dose,” Matthew Miller, an infectious disease specialist and associate professor at McMaster University, told CTV News.

“The further you get away from that first dose before getting the second dose, the greater your relative risk is [than] if you’ve got that second dose on schedule.”

The very first people getting the vaccines are those on the frontlines and those at the highest risk from the virus, such as elderly people. This makes it all the more important that we get the vaccine rollout right, Miller said.

“We need to make sure that we give those people their vaccine doses on time in order to ensure that they enjoy sort of the maximum benefit and protection that the vaccines have to offer,” he said.

“I think right now where we’re still prioritizing the highest risk populations, it makes the most sense to stick as closely to the vaccine recommended schedule as possible.”

Both Pfizer and Moderna tell CTV News their shots should be delivered as studied and agreed upon by Health Canada.

“The safety and efficacy of the vaccine has not been evaluated on different dosing schedules as the majority of trial participants received the second dose within the window specified in the study design,” Pfizer said in an emailed statement, adding that there is no data “to demonstrate that protection after the first dose is sustained after 21 days.”

Moderna also stated that all of their trials included a second “boost” dose at 28 days, meaning they have no data on how long the efficacy of the first dose alone is sustained.

Health Canada’s position on the vaccination schedules is that Canadians “receive both doses of the same vaccine, as close as possible to the authorized dosing regimen for each vaccine.”

However, the organization noted in an emailed statement that provinces and territories may refer to NACI’s advice on the matter when making decisions on their vaccine rollout, and that NACI “has carefully weighed the scientific evidence and ethical implications” of all of their recommendations.

And some seniors in Quebec are considering suing because their second doses of the vaccine have been delayed — with some of them having contracted COVID-19 in the meantime.

How much the strategy of delaying the second doses could speed up vaccination is an unknown. Ottawa says 80 million doses are to arrive this year — but exactly when they will be in the arms of the public is still up in the air.