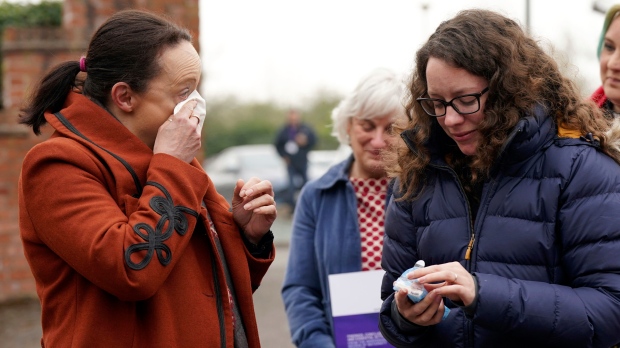 LONDON — A review into a scandal-hit British hospital group said Wednesday that persistent failures in maternity care contributed to the avoidable deaths of more than 200 babies over two decades.

The review began in 2018 after two families that had lost their babies in the care of Shrewsbury and Telford NHS Trust in western England campaigned for an inquiry.

Former senior midwife Donna Ockenden led an investigation into almost 1,600 incidents between 2000 and 2019, including cases of stillbirth, neonatal death, maternal death and other severe complications in mothers and newborns.

The investigation found 131 stillbirths, 70 neonatal deaths and nine maternal deaths either could have or would have been avoided with better care.

Ockenden said Wednesday that hospital management “failed to investigate, failed to learn and failed to improve.”

“This resulted in tragedies and life-changing incidents for so many of our families,” she said.

Ockenden’s initial report in 2020 found that a pattern of failures and poor maternal care led to avoidable deaths and harm to mothers and newborns. It said deaths were often not investigated and grieving mothers were at times blamed for their loss.

Ockenden said the hospital had a a focus on keeping cesarean section rates low, and that in some cases opting to perform C-sections earlier would have avoided death and injury.

Ockenden said Wednesday she was “deeply concerned” that families continued to contact the review team in 2020 and 2021 with concerns about the safety of care at the hospital.

Ockenden said there had been some progress since her 2020 report but “systemic” improvement was needed across the country, including ensuring maternity units were properly staffed and funded.

She said “we owe it to those families we failed and those we care for today and in the future to continue to make improvements.”