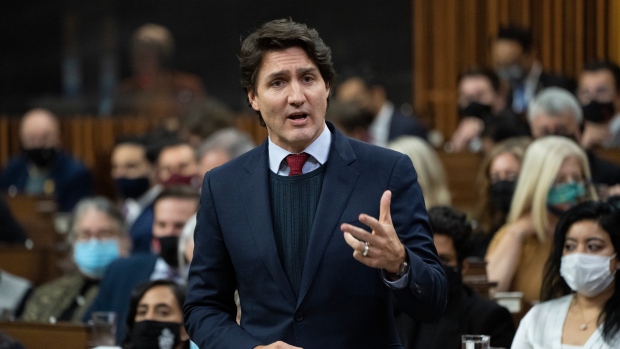 OTTAWA — Prime Minister Justin Trudeau will speak by phone to the premiers of the country’s 10 provinces on Tuesday to discuss the rapidly spreading Omicron variant of the coronavirus, his office said.

The call was set to take place at 6 p.m. ET, said a provincial source, who requested anonymity.

Separately, Deputy Prime Minister Chrystia Freeland told reporters that Ottawa would act quickly and do what was necessary but gave no details.

Canada has already announced a ban on people who recently travelled to 10 countries in Africa.

Omicron, which health officials say is more contagious than the currently dominant Delta variant, has started spreading locally within communities in Canada since being first detected in November.

Ontario, the most populous of the 10 provinces, has paused plans to remove pandemic-related curbs and asked staff to continue working from home. It announced measures on Tuesday to protect those living in long-term care and retirement homes.

“Data suggests that each Omicron case is infecting four to eight times more individuals than the Delta variant, and it is rapidly becoming the dominant strain in Ontario,” Chief Medical Officer Kieran Moore told a briefing.

Neighbouring Quebec is recruiting more people to give vaccinations as it ramps up distribution of booster shots, health minister Christian Dube told reporters.

Sun Life Financial paused its office reopening plan for more employees until the end of January due to worries about Omicron, the Toronto-based insurer said on Tuesday. That followed a similar move by Canada’s third-largest lender, Bank of Nova Scotia, on Monday.

(Reporting by David Ljunggren in Ottawa, Ismail Shakil in Bengaluru and Allison Lampert in Montreal; Editing by Sonya Hepinstall and Bill Berkrot)