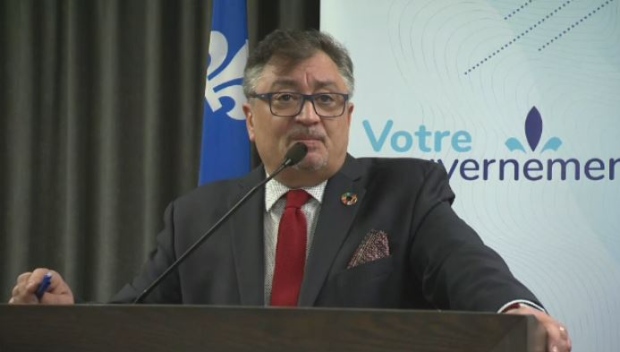 MONTREAL — Passengers travelling on an Air Canada plane from Montreal to Vancouver in close proximity to a woman who has tested positive for COVID-19 are being alerted.

Quebec’s public health director Horacio Arruda confirmed that in a news conference on Monday, adding that it was only a precautionary measure and the risk of contracting the disease is low.

“Public Health people here in Quebec have been advised of the people travelling with that person. There’s going to be a certain number of people who are going to be personally contacted because they were three rows in front and three rows behind that case,” he said.

Air Canada confirmed it was advised Saturday by the B.C. Centre for Disease Control that a passenger travelling on Feb. 14 tested positive for COVID-19. A spokesperson for the British Columbia Ministry of Health said the case was not a new one, but was a case announced on Thursday.

Arruda said the likelihood of a fellow passenger contracting the illness would depend on several factors, including the patient’s symptoms, the phase they were at in their illness and their hygiene.

He added that the risk is low for anyone who wasn’t in direct and close proximity.

“If you are two metres away from the person, you are not supposed to get the disease, unless there is a specific condition,” he said. “If you walked beside somebody in the airport, there is no problem.”

The woman showed mild symptoms upon arriving in Vancouver and was tested for the virus at hospital. She has since been allowed to return home but must remain in isolation.

It has been confirmed that she did spread the illness to a close relative who wasn’t on the plane. He is also isolated at home in stable condition.

“We know that this is primarily spread through close contact and breathing in droplets that somebody with the virus is coughing out into the air,” explained B.C. health officer Bonnie Henry. “So we know that you have to be relatively close to somebody to inhale those droplets, so we find everybody who is in that circle of being close to that person.”

Because the plane landed in Vancouver, B.C. officials are in charge of the case and had already been in touch with everyone who was at risk because of the infected passenger’s itinerary.

Arruda stressed that the best way to stop the spread of illness is to use standard advice: cough into your arms, use tissues, and wash your hands frequently.

“That’s the best way to protect yourself. It’s not masks at all,” he said.

As of Feb. 24 at 3 p.m., Quebec health officials were monitoring one person in the province as a potential case of COVID-19 and 43 people had so far tested negative for the disease since the start of its spread.