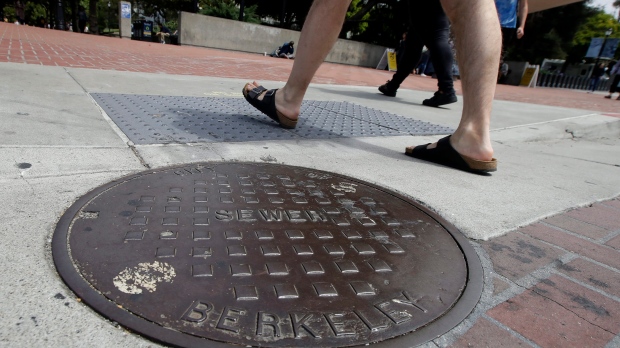 OTTAWA — When Ottawa Public Health officials are trying to decide whether restrictions in the city need to tighten up, they look to the normal markers like positive tests, patients in hospital, and outbreaks. But they are also among the few in the country that take cues from the city’s sewers.

Using municipal wastewater to look for evidence of the virus behind COVID-19 is part of a rapidly expanding body of science. The virus is shed in human waste, often before a patient even knows they are sick.

Wastewater testing initiatives were virtually nonexistent in Canada before COVID-19, but there are now more than two dozen universities researching the method. At least seven cities and the Northwest Territories, meanwhile, are already reporting publicly on the wastewater results.

Ottawa’s project, a combined effort from the University of Ottawa and the locally based pediatric health and research centre CHEO, was the first to report the data daily.

A rising “poop signal” — as some on Ottawa’s social media sites have taken to calling it — is most often a warning days ahead that cases are about to soar.

It happened most recently over Easter. Rob Delatolla, a civil engineering professor at the University of Ottawa and one of the brains behind the city’s COVID-19 wastewater project, said the data over the Easter long weekend was not good.

‘They’re going really high, the data points,” he said. “So it’s not the best story, but it kind of reflects, I think, what’s really happening in the city.”

Sure enough, Ottawa’s case numbers went from around 150 to 170 a day last week to more than 250 a day on several occasions in recent days.

Bernadette Conant, Chief Executive Officer of the Canadian Water Network, said the organization created a coalition to help co-ordinate and track all the work that began emerging last spring when the relationship between COVID-19 and wastewater first garnered serious attention.

“The very immediate goal is can it help public health in Canada,” she said.

“We can’t quantify it but we can say, ‘yes it has value.”

In Ottawa, the signal is quoted by real and armchair epidemiologists alike.

Delatolla said researchers are working closely with Ottawa Public Health, and every day he reports the number to Dr. Monir Taha, an associate chief public health officer in the city.

“He uses our wastewater data in his daily reports to the (epidemiology) group at Ottawa Public Health, and often times if we’re late, he’ll send us an email and say, ‘hey, guys is it coming, is everything OK,” said Delatolla.

Dr. Vera Etches, the city’s chief public health officer, quotes the signal’s data it in her tweets, letting Ottawa know it’s time to buckle back down. In early March, Etches said in media interviews that the wastewater was telling her the third wave was upon us.

But the system is not infallible. As Etches was issuing her warning, the poop signal was erroneously suggesting things were getting a lot better.

“We definitely saw the snow melt affect the signal for sure,” said Delatolla.

A combination of factors around the spring melt meant for about two weeks in mid-March the data went all wonky, diluted by extra water, affected by excess salt and sand, and delayed by the city’s new system which holds back some wastewater during the spring so as not to overwhelm the water treatment plant.

Delatolla said things are back on track now.

“What’s so amazing is we’re just a small little lab doing this,” he said. “You think about the 4,000 tests they do a day in Ottawa to get that line. We took one sample, one small, little lab, and were able to get a very similar line. So it shows you the power of using the wastewater.”

It’s also now telling the story of the variants of concern. The team developed a new test to look for the B.1.1.7 mutation first identified in the United Kingdom.

Ottawa has screened more than 1,600 cases of variants so far, but it takes days, if not weeks, to confirm which particular variant is in play.

The wastewater signal is showing that more than half the virus in the sewage is the b.1.1.7 variant.

Researchers have completed a test to look for at least one other variant so far, and they intend to share their efforts with other cities too. Vancouver, Calgary, and Ontario’s Peel region are among the seven other municipalities with wastewater COVID projects.

Conant said the idea for COVID-19 testing grew out of a project in the Netherlands, which pivoted to test for SARS-CoV-2 last winter after already testing waste for other viruses.

An online portal tracking the research run by the University of California Merced shows there are 248 universities studying the idea, along with 70 “dashboards” in 50 countries around the world publishing regular data on COVID-19 in wastewater.

The portal, called “COVIDPoops19,” even has it’s own Twitter account (and an accompanying poop emoji that has come down with a case of the novel coronavirus).

Conant said the future for the research is still being developed, but it is expected it can play a valuable role sussing out trends and outbreaks in high-risk places like long-term care homes and prisons.

This report by The Canadian Press was first published April 11, 2021.