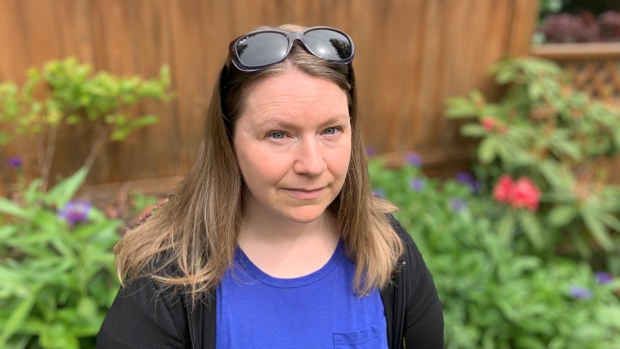 TORONTO — It began with the typical COVID-19 symptoms for Angela Griffin back in March 2020. She developed a sore throat, headache, fatigue, body aches, and a tightness in her chest.

When she visited the ER, she was unable to get tested for the disease because they were only testing health-care workers, recent travellers, and close contacts of confirmed cases at the time. However, the doctors told her she was clinically positive for COVID-19 based on her symptoms and to assume she was infected.

That was only the beginning of what Griffin has described as a “rollercoaster of symptoms” she has experienced since her initial illness, including migraines, body aches, chills, fever, shortness of breath, brain fog, fast heart rate, insomnia, and dizziness.

“Every day you never knew what might happen that day,” Griffin said during a telephone interview with CTVNews.ca from her home in Vancouver on Tuesday. “You’d get new symptoms, you’d get some come back that you had before.”

It’s the persistent fatigue, however, that has most upended her life.

Griffin recalled that, in August 2020, when she would try to go for a run or play with her two children she would be so exhausted by the exertion that it would take her days to recover.

“I would just end up in bed like basically paralyzed. I couldn’t lift my arm. I couldn’t roll over,” she said.

It was around that time that Griffin said she developed brain fog and memory issues.

“I felt like there was all these thoughts in my head, but I couldn’t grab onto them. It was really weird. It’s a terrible feeling,” she said.

By September 2020, Griffin was diagnosed with a complex chronic disease called myalgic encephalomyelitis, which is also known as chronic fatigue syndrome (ME/CFS).

“I had no idea this level of fatigue existed before I got sick. It’s like every cell in my body is out of energy,” she said.

Griffin called her diagnosis of ME/CFS a “blessing” because she finally had an explanation for the way she was feeling, and an opportunity to learn how to manage it.

Like many others, Griffin had never heard of ME/CFS before her diagnosis, even though it affects at least 600,000 Canadians and approximately 2.5 million Americans, although some experts worry those numbers will increase dramatically in the wake of COVID-19.

ME/CFS is a debilitating, multi-system neurological disease that is believed to be triggered by an infectious illness in the majority of cases. The syndrome is characterized by a number of symptoms including persistent and recurring fatigue, headaches, muscle and joint pain, sleep dysfunction, and cognitive impairment.

According to the Public Health Agency of Canada, there may also be nervous or immune system responses to the disease that can cause tender lymph nodes, gastrointestinal abnormalities, heart rate abnormalities, hypersensitivity to light and sound, mental health conditions, and thermoregulation issues (feeling feverish or cold in arms and legs).

The disease appears to be more common in women, people in their 30s, 40s, and 50s, those who have relatives with ME/CFS, and those who have experienced childhood physical or emotional trauma.

While there are no biomarkers for ME/CFS, the cardinal feature of the disease that separates it from other illnesses is the presentation of post-exertional malaise (PEM).

“If you do any minimum physical or mental effort, you will crash for several hours to several days,” Alain Moreau, a professor in the faculty of medicine at Montreal University and the scientific director at the Saint-Justine Research Centre in Montreal, explained during a telephone interview with CTVNews.ca.

“This is a kind of an exacerbating event.”

According to #MEAction, an international global support network for patients, 75 per cent of those affected by the disease are unable to work at some point and 25 per cent are homebound or bedridden.

Moreau, who is also leading the Interdisciplinary Canadian Collaborative Myalgic Encephalomyelitis Research Network (ICanCME), a national research network funded by the Canadian Institute of Health Research, said there is no laboratory test for ME/CFS and diagnoses can sometimes take years.

Because there is no cure for ME/CFS, treatments to manage the symptoms can vary. Medications, pacing physical activities, psychotherapy, specialized exercise, and alternative therapies work well for some patients, but not for others.

And while some patients seem to eventually recover on their own, many others live with the disease for years or even the rest of their lives.

“Over time, they’re developing some tricks to manage their, what they call the energetic envelope, and be very selective in their activity, but this is not a way of life,” Moreau said. “It’s a very difficult battle.”

Dr. Lucinda Bateman is a physician and researcher who treats ME/CFS patients at the Bateman Horne Center she founded in Salt Lake City, Utah. Since the pandemic began, she has seen a growing number of patients who had COVID-19 and are now presenting with symptoms that match the criteria for a ME/CFS diagnosis.

Moreau is also studying COVID-19 patients who have developed ME/CFS. He said that experts know that more than 80 per cent of people with ME/CFS developed the disease after they had a viral infection such as the flu, mononucleosis primarily caused by the Epstein-Barr virus (EBV), or a bacterial infection, such as Lyme disease.

It’s a worrying prospect for both Moreau and Bateman.

“Now, with millions affected by COVID-19, and some of them with long COVID, you could imagine that we will have an increased number of ME/CFS people over time,” Moreau said.

Worryingly, Moreau said a lot of the patients he’s seen are young women between the ages of 24 and 35.

“That is really, really scaring us, in terms of you don’t want to end up with chronic complex diseases that will prevent you to go back to work and to accomplish your life when you are only 24 or 25,” he said.

Bateman, too, said she’s already witnessing an “explosion” of new ME/CFS cases in her clinic and that more research on the disease is urgently needed. She said the COVID-19 pandemic can provide them with a rare opportunity to study the evolution of ME/CFS from the initial infection.

“We now have the opportunity to document the virus that caused it and kind of track what happens as the illness evolves until it meets the same criteria we use for ME/CFS,” she said. “That then should inform and help us understand more about the situation ME/CFS patients are experiencing.”

In April, Dr. Anthony Fauci, chief medical adviser to the Biden administration, remarked on such an opportunity during a special session about COVID-19 at the annual meeting of the American Academy of Neurology.

“We’ve been chasing myalgic encephalomyelitis and chronic fatigue syndrome without ever knowing what the etiologic agent was. Now we have an absolutely well-identified etiologic agent that should be very helpful now in getting us to be able to understand it,” he reportedly said.

“I hope we do. It’s been mysterious to us for years. Maybe this will give us a chance at a breakthrough.”

Bateman added that more awareness about ME/CFS will help health-care providers and patients recognize the symptoms earlier, which is important because she said trying to exercise or do too much in the early stages of the disease can make it worse.

Griffin said she wishes she had known not to try to “push through” the exhaustion in those early days of her illness because she thinks it aggravated her condition. Now, she’s more focused on taking one day at a time.

“It’s hard to go to bed every night wondering if I’ll be able to get out of bed the next day,” she said.

“[My children] can’t count on me to help with homework, make meals, take them to classes or tuck them in at night because I may not have the energy. They never know if I’ll be able to get up and function or not. It’s a devastating illness.”