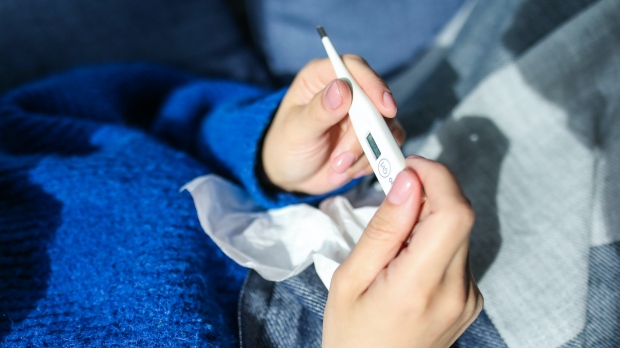 More than three months after getting infected with COVID-19 in mid-December, Regan James said he, along with his wife and children, felt the familiar cough, nasal congestion and sense of fatigue settling in for a second time.

“The symptoms that we had in March were the same, just not as severe … For sure it was COVID,” he told CTVNews.ca over the phone on Tuesday. “I first started getting a scratchy throat on the Sunday. By the next Friday, I was feeling much better.”

The similarities in symptoms experienced in December and again in March led James, 40, to think he and his family were reinfected with COVID-19, and positive results using a rapid antigen test confirmed this was the case, he said. While James said he was not able to verify the COVID-19 strain he and his family members were infected with, both infections took place as the Omicron variant was taking hold in their home province of Ontario, as well as the rest of Canada.

The family was experiencing common COVID-19 symptoms such as an occasional cough, sinus pressure, a congested nose, fatigue and headaches. The main difference, according to James, was that the symptoms experienced in December were more intense compared to those in March. In addition, James, who was double vaccinated at the time of both infections, said symptoms from the first infection lasted much longer, resolving after about 11 days.

“It kept trying to do a comeback, so I would start to feel really good and think, ‘Great, I’m off to the races,’ and then that night, all of a sudden, my head pressure would be back [and] my sinus pressure would come storming back,” James said.

In December, he and his family were unable to take rapid antigen tests until about two weeks after the onset of symptoms and by then, results came back negative, James said. But having been in contact with friends who also tested positive at the time was confirmation enough for James that he and his family had contracted COVID-19.

What’s interesting to note, James said, is that with their initial infection, both of his 16-year-old twin daughters, who were unvaccinated at the time, had different experiences with the disease. One daughter had similar symptoms to James, while the other sailed through with just a headache, he said. At the time of the reinfection, the daughters’ symptoms were also milder by comparison, James said.

Based on his experience, James said that if he were to get infected with COVID-19 a third time, he anticipates that symptoms would continue to be milder when compared with his previous infections.

“Now that we’ve had it twice, with the difference in severity of symptoms … my fear of catching it again is much reduced, I’m not concerned at this point,” James said.

Experts, however, caution against this line of thought.

Although there is currently little evidence to suggest that COVID-19 reinfections are either more severe or milder than initial infections of the disease, Dr. Dale Kalina, an infectious disease doctor at Joseph Brant Hospital in Burlington, Ont., said he has seen significant variability in the types of symptoms his patients are experiencing during both their first and second infections. As a result, it is not always guaranteed that reinfections will present a milder course of disease, he said.

“We don’t have a lot of evidence from what I’ve seen about comparing first infections with second infections beyond anecdotes,” he told CTVNews.ca in a phone interview on Tuesday. “Initially, it was the hope that people couldn’t get infected a second time, which we now know is not true.”

Recent public health data shows that as much as 10 per cent of Canadians who were recently infected with the Omicron BA.2 sub-variant were previously infected with COVID-19. While not all provinces provide data on reinfection rates, Ontario health officials have reported that 11,370 people have been infected with Omicron twice since Nov. 1, 2020.

According to a report released by Quebec’s National Institute of Public Health in January, the province was seeing about 32 reinfections for every 1,000 initial infections, and nearly 9,000 people are suspected of having been reinfected with COVID-19 since May 2020.

Evidence suggests that getting reinfected with the Omicron variant is likely to result in a course that’s manageable at home for those who are vaccinated, said Dr. Lisa Barrett, an infectious disease specialist and professor at Dalhousie University in Halifax. However, it’s still possible for these people to experience severe bouts of COVID-19 during a subsequent infection, she said.

“The vast majority of the information out right now doesn’t demonstrate that most people get a worse reinfection, if it’s Omicron,” Barrett told CTVNews.ca in a phone interview on Tuesday. “But there is a spectrum of disease — I wouldn’t bet my bottom dollar that my reinfection is going to be milder.”

Each person will likely respond to infection and reinfection differently due to genetics, Barrett said. It’s also crucial to remember that vaccination and previous infection do not make someone immune from contracting COVID-19 again, she said.

“You do develop protective immunity, [but] it’s not sterilizing immunity,” Barrett said.

Some diseases, such as malaria, will wane in severity with each infection, while others like dengue fever can become more severe depending on the strain, Kalina said. Neither of these trends, however, have been reported in connection with COVID-19, he said.

It’s also important to note that regardless of whether a person is infected with COVID-19 once or twice, the factors that present an increased risk for severe COVID-19 outcomes remain the same, Kalina said. This includes old age and underlying health conditions such as diabetes.

“Those are the same risk factors that you bring to any subsequent infections, plus whatever damage that may have been done with the first bout of disease that you may have had,” Kalina said.

Another factor to consider is whether or not a person is vaccinated against COVID-19 and how long ago they had their last dose, Barrett said. While experts have said that it is unlikely for people to be reinfected with the same strain of COVID-19 within three to four months after vaccination, it’s not impossible, Kalina said.

“In medicine, there are no maxims and we don’t speak in absolutes because things happen and everybody’s different,” said Kalina. “If you had mounted a particularly strong immune response [after vaccination or previous infection] then there’s no telling how quickly you could be reinfected or what the severity of the disease would be, which is of course why we have focused so much on prevention.”

This is why it is crucial to manage any existing comorbidities, Kalina said, and to get vaccinated based on current guidelines and eligibility. He also advises that people avoid high-risk activities such as gathering in large groups while indoors, and encourages Canadians to continue wearing face masks.

“Prevention is key … because you can’t necessarily predict how severe the disease will be,” Kalina said.

In Joan McKenzie’s case, the Toronto woman described her COVID-19 reinfection as much more severe than the symptoms she experienced during her initial infection months prior. The first time she was infected in December 2021, McKenzie said her symptoms included a painful sore throat, runny nose, lower back pain, body aches, and eye irritation, but “weren’t terrible.” She also did not have a fever nor did she lose her sense of taste or smell. She isolated for 10 days starting on Christmas Day, she said.

But when McKenzie was reinfected with Omicron in late March of 2022, she was faced with an entirely different illness, she said.

“It started with that really painful throat, which was more painful than the first time by far, but I didn’t have any of the other respiratory kind of symptoms like a stuffy nose,” she said. “It was just extreme fatigue – I basically was in bed for five or six days.

“This time, it was a different course completely.”

Although she was not able to confirm the infection either time with a rapid antigen or polymerase chain reaction (PCR) test due to a lack of access and eligibility, her doctor said she was likely infected with COVID-19 both times. McKenzie self-isolated for approximately eight days after the onset of symptoms, she said.

Since then, McKenzie said she sleeps more than she did before getting reinfected with COVID-19, but is otherwise back to regular activity, going to the gym several times a week. Although she does have fibromyalgia, a condition that causes widespread musculoskeletal pain, it is not listed as an underlying medical condition of concern with regards to severe COVID-19 outcomes by either the Public Health Agency of Canada or the U.S. Centers of Disease Control and Prevention. McKenzie received her third dose of the COVID-19 vaccine in November 2021 and is scheduled to receive her fourth shot next week.

McKenzie said getting infected with COVID-19 the second time around was more concerning and presented worse symptoms. This raises concerns about what a third infection could look like, she said.

“I think the second infection was worse in the sense that it seemed to hit me systemically. Instead of respiratory, it was more of a ‘systems down’ kind of thing,” said McKenzie. “It makes me a little worried about the next wave or the next infection … because the third one could be it.

“If the next variant is worse than this one, we’re going to be in big trouble.”

With files from The Canadian Press.

WHAT QUESTIONS DO YOU HAVE ABOUT OMICRON?

With the emergence of a new COVID-19 variant of concern, labelled Omicron, CTVNews.ca wants to hear from Canadians with any questions.

Tell us what you’d like to know when it comes to the Omicron COVID-19 variant.

To submit your question, email us at dotcom@bellmedia.ca with your name, location and question. Your comments may be used in a CTVNews.ca story.