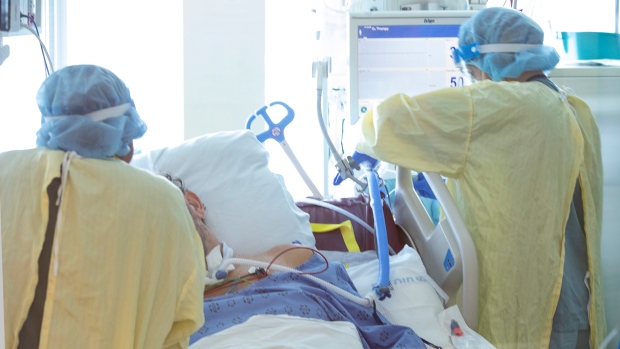 As officials in Ontario and Quebec report the provinces have entered a sixth wave of the COVID-19 pandemic, some experts say the rise in infections was inevitable as health authorities removed restrictions, such as mask mandates and proof of vaccination requirements, amid the emergence of the Omicron subvariant BA.2.

Dr. Kashif Pirzada, an emergency physician in Toronto, told CTV News Channel on Wednesday that decreased public health vigilance cleared a path for BA.2 to drive up infections and hospitalizations.

“I think it was pretty predictable that when they dropped the mask mandates it pretty much guaranteed that this would happen,” said Pirzada, adding that the sudden rise in hospitalizations in Ontario is “alarming.”

However, Pirzada said it’s still not yet clear whether this sixth wave will be a surge or a ripple, but noted what’s currently happening in Ontario and Quebec may be a sign of what’s to come for other provinces.

“It looks like hospital capacity might be overwhelmed again. So we are repeating the same mistakes that we did before unfortunately,” he said.

With hospitalizations rising, Pirzada said provincial governments may have to re-impose mask mandates to help stem infections amid the upcoming spring holidays.

“Governments will have to be clever, but they’ll have to walk back the mask mandate somehow because the big religious holiday season is coming up. Ramadan, Easter, Passover, these are large groups of people that are going to get together indoors, it’s going to magnify things,” he said.

Canada’s top public health officials have said that continuing to wear a mask amid restrictions easing in many provinces is a “personal choice.”

PHAC’s website states that even if masks are no longer mandatory by local or provincial public health advice, wearing a mask is important and provides “an added layer of protection.”

“Whether you’re vaccinated or not, you should consider wearing one in shared spaces with people from outside of your immediate household. This is especially important indoors, whether in private or public settings,” PHAC says on its website.

Dr. Peter Juni, director of the Ontario COVID-19 Science Table, told CTV News Channel on Tuesday Ontario is “definitely again” in a phase where case numbers are going up “actually quite steeply,” and said now is not the time to gather or go to crowded events without a face mask.

Juni said case numbers, based on wastewater surveillance, are back to the levels experienced during the Omicron wave this past winter.

He explained that the difference between these waves is that during the winter’s Omicron peak, changes in people’s behaviour and the easing of restrictions was “moderate” compared to now when mask mandates and vaccine requirements having ended completely.

With few public heath measures now remaining in place in Ontario, Juni said is unclear how severe this spring wave of infections could be.

“What is important to realize is that we have had now about 7.2 million people with a third dose, plus probably about 4.5 million people who are infected since December 1. This will offer quite some immunity, but we’re certainly not out of the woods,” he said.

Experts say the uptake of third vaccine doses, which has shown to be crucial in protecting against severe outcomes from Omicron infection, is lagging behind first and second doses.

A recent study conducted in England found the efficacy of two Pfizer vaccine doses against symptomatic disease brought about by Omicron was 65.5 per cent after two to four weeks, before falling to 8.8 per cent efficacy 25 or more weeks after vaccination. With a booster dose of the Pfizer vaccine, protection increased to 67.2 per cent after two to four weeks, but again began to wane as more time went on.

Experts say this is concerning for those who are most vulnerable to severe COVID-19 outcomes, such as people who are older or immunocompromised. These groups were prioritized for early boosters in many parts of the country, thus the immunity provided by these doses are more likely to have waned in the months since. This has spurred talks of a potential fourth dose for some.

According to data tracked by CTVNews.ca, less than 15 per cent of Canada’s eligible population – those aged five and older – are not fully vaccinated, with nearly 11 per cent not having received a single dose. In regards to booster shots, roughly 50 per cent of eligible Canadians – those aged 12 and older — have received a third dose.

Pirzada said the slower uptake of boosters compared to previous doses is “very concerning.” He said getting a booster could mean the difference of having a “mild cold or spending a week in bed shivering” if infected with Omicron.

“People who have a booster have a much lighter course of illness… especially if you’re within four or five months of your booster,” he said.

Dr. Lisa Salamon, an emergency room physician with the Scarborough Health Network in Toronto, told CTV’s Your Morning on Wednesday those with just one or two doses are at a higher risk of severe illness if infected by the Omicron variant or its subvariant.

“We’re seeing obviously cases in the unvaccinated, but the under vaccinated also make up a significant amount of people that are being hospitalized and could go the ICU,” said Salamon.

With few public health measures in place, Salamon said individuals should asses their risks and make informed decisions accordingly amid this sixth wave and urged those who have not yet done so to get fully vaccinated, as well as any booster shots.