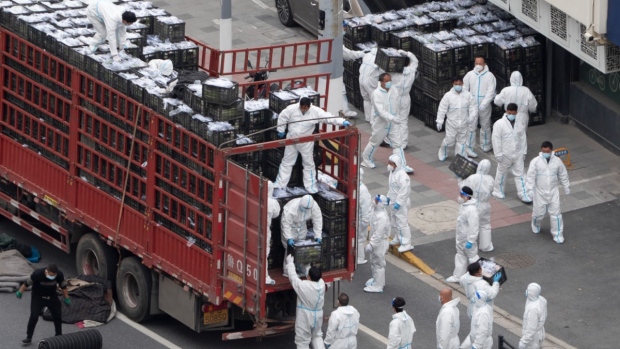 BEIJING — Following a public uproar, Shanghai is allowing at least some parents to stay with children infected with COVID-19, making an exception to a policy of isolating anyone who tests positive.

A top city health official said at a news conference that parents can apply to stay with children with “special needs” and accompany them if they fully comprehend the health risks and sign an agreement.

The parents must wear masks, dine at a different time than their children, avoid sharing items with them and strictly follow all regulations, said Wu Qianyu of the Shanghai Municipal Health Commission. She did not define what qualifies as “special needs.”

Her announcement followed Chinese state media reports a day earlier that an isolation site set up at the Shanghai New International Expo Centre was accepting children with parents. The city has opened sprawling isolation centres for tens of thousands of people to isolate the growing number of positive cases.

Reports that parents were being separated from their infected children had sparked a wave of protest online last weekend, fuelled by photos showing several children in each cot with no parents in sight.

Shanghai reported 17,077 new cases detected over the previous day, all but 311 of them in people who showed no symptoms. Under China’s zero-COVID approach, the city requires all those who test positive to be held in designated locations for observation, along with their close contacts.

The latest cases bring Shanghai’s total to around 90,000 in an outbreak that began last month. No deaths have been ascribed to the outbreak driven by the Omicron BA.2 variant, which is much more infectious but also less lethal than the previous delta strain. Two deaths have been reported in another ongoing outbreak in Jilin province in China’s northeast.

An official from the EU Chamber of Commerce in China joined a growing chorus of criticism of the Shanghai lockdown, which has disrupted daily life and commerce in a major financial and business centre.

“We see a severe shortage of living necessities, particularly fresh vegetables, and citizens are unable to get their deliveries via their apps,” said Bettina Schoen-Behanzin, chair of the chamber’s Shanghai chapter.

While some residents are receiving food supplies from their district government, she said that “a kind of black market” has developed charging “rocket-high prices” for fruits and vegetables.

“Another really big fear is ending up in one of those mass central quarantine sites,” Schoen-Behanzin said in an online event for member companies and journalists.

Others complained earlier about shortages of medical workers, volunteers and beds in the isolation wards. More than 38,000 health workers from 15 provinces have been sent to Shanghai to help with the mass testing and other needs.

Beijing is also tightening measures after 11 cases were detected in the Chinese capital in recent days.

Despite growing public frustration and concerns about the economic effects, China says it is sticking to its hard-line “zero-tolerance” approach mandating lockdowns, mass testing and the compulsory isolation of all suspected cases and close contacts.

While China’s vaccination rate hovers around 90%, its domestically produced inactivated virus vaccines are seen as weaker than the mRNA vaccines such as those produced by Pfizer-BioNTech and Moderna that are used abroad, as well as in the Chinese territories of Hong Kong and Macao. Vaccination rates among the elderly are also much lower than the population at large, with only around half of those over 80 fully vaccinated.

This story corrects the spelling of the given name of Shanghai Municipal Health Commission official Wu Qianyu.