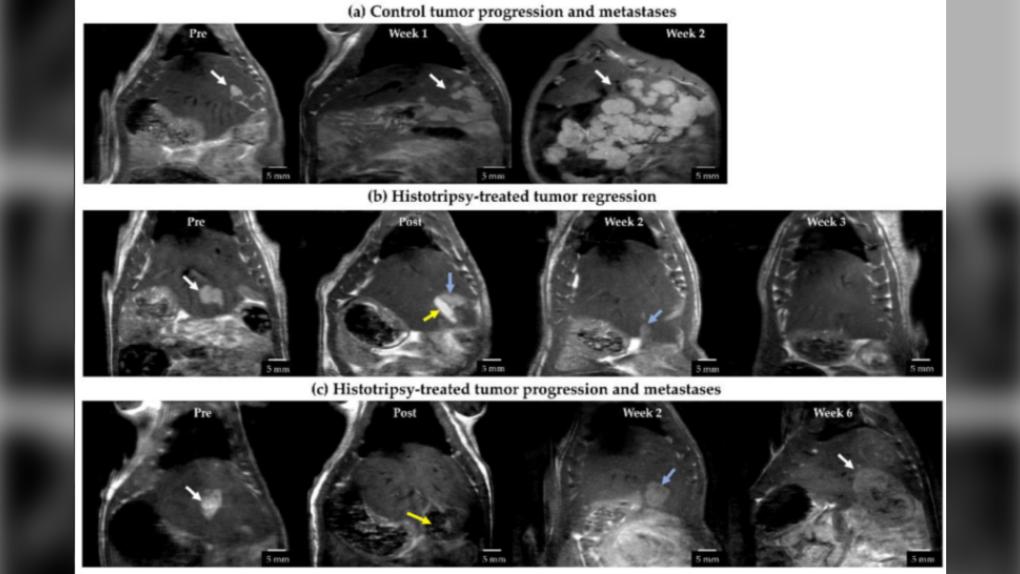 There might be a non-invasive way to destroy cancer cells for good, according to new research involving rats: the power of sound.

Researchers with the University of Michigan were able to break down liver tumours by up to 75 per cent in rats using only targeted sound waves, spurring the animals’ immune system to attack the remaining cancerous material.

The key detail from this new research is that even destroying just part of the tumours had a lasting effect. In 80 per cent of the subjects, there was no evidence of the cancer recurring afterwards.

“Even if we don’t target the entire tumour, we can still cause the tumor to regress and also reduce the risk of future metastasis,” Zhen Xu, professor of biomedical engineering at the University of Michigan and corresponding author of the study, said in a press release.

The treatment is called histotripsy, which uses focused ultrasound waves to destroy tissue with precision. It was pioneered by researchers at the University of Michigan, and they believe that this relatively new treatment, which is already being tested in a separate human liver cancer trial in the U.S. and Europe, could revolutionize cancer treatment.

“Histotripsy is a promising option that can overcome the limitations of currently available ablation modalities and provide safe and effective noninvasive liver tumour ablation,” Tejaswi Worlikar, a doctoral student in biomedical engineering and first author of the study, said in the release. “We hope that our learnings from this study will motivate future preclinical and clinical histotripsy investigations toward the ultimate goal of clinical adoption of histotripsy treatment for liver cancer patients.”

Often it’s not possible to target and remove the entirety of a tumour through surgery or existing treatments because of the location or stage of the disease. And even though histotripsy can potentially address more tumours due to being a non-invasive treatment, it’s possible that it might still not be logistically possible to target the entirety of the cancerous material with histotripsy. So how much tissue would have to be destroyed to make the treatment successful in the long term?

This new study, published at the end of March in the journal Cancers, was the first study to focus on whether partial use of histotripsy would have a lasting impact.

In order to see if the tumour would just bounce back, researchers intentionally destroyed only 50-75 per cent of liver tumours in rats.

Out of 11 rats treated, full tumour regression was seen in nine, with no local resurgence of targeted tumour tissue in all eleven rats up to 12 weeks later. In comparison, 100 per cent of the control group of rats with liver tumours who were not treated in that same time period experienced consistent tumour growth.

Normally ultrasound waves are used to produce an image of what is going on in the body, but in histotripsy, those sound waves have been engineered to cause tiny, controlled fissures within tissue.

“Our transducer, designed and built at U-M, delivers high amplitude microsecond-length ultrasound pulses — acoustic cavitation — to focus on the tumor specifically to break it up,” Xu said. “Traditional ultrasound devices use lower amplitude pulses for imaging.”

These pulses create microbubbles inside the tumours that expand and collapse, serving to physically destroy the tumour’s structure and kill cancer cells.

Xu’s team has been working on histotripsy for years, and this study is just the latest step forward towards the treatment becoming a viable option for future patients.

The human trial currently ongoing for histotripsy, called #HOPE4LIVER, is sponsored by HistoSonics, a company created by the University of Michigan. So far, a handful of patients have been successfully treated through the trial in the U.S. and in Europe in 2021, with the most recent patients receiving histotripsy in the U.K. last September. A press release from the NHS stated that it took only six minutes and 58 seconds to destroy the tumour in one of the patients.

Patients are being monitored to see if their cancer returns — if the trial follows its original timeline, it will be completed in 2023.