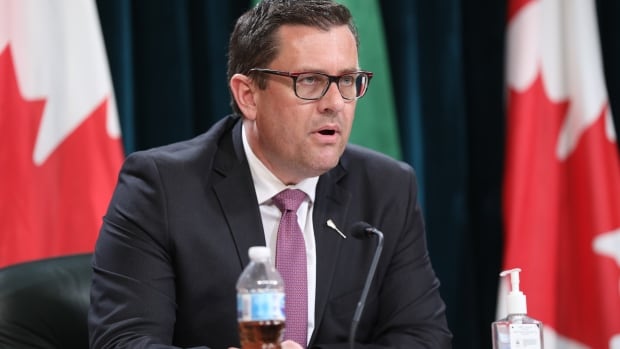 Saskatchewan Health Minister Paul Merriman says there are signs the province is entering its fourth wave of the COVID-19 pandemic, but that the provincial government is not prepared to mandate vaccinations.

Doing so would infringe on “people’s personal rights,” Merriman said in a news conference at the legislative assembly on Wednesday.

“I don’t know why it has to be a government mandate,” Merriman said. “If it’s government mandated, it changes the factor of the government telling you what to do versus you making a choice to go get it. If people don’t want to get vaccinated, that’s their choice.”

Merriman said there’s a small percentage of people that “just will not get vaccinated” and that incentives used in other provinces haven’t been shown to improve vaccination numbers. Instead, the province has recently hosted vaccine clinics at Saskatchewan Roughrider games and festivals, he said.

If it’s government mandated, it changes the factor of the government telling you what to do versus you making a choice to go get it. If people don’t want to get vaccinated, that’s their choice.– Saskatchewan Health Minister Paul Merriman on COVID-19 mandates

The news conference also came one day after Ryan Meili, the leader of the Opposition Saskatchewan NDP, called on Merriman and Premier Scott Moe to “come out of hiding.” Meili accused Merriman and Moe of being largely absent from public view as the number of COVID-19 cases rises.

While the Saskatchewan Health Authority has recently held some media briefings — including one on Tuesday to address a COVID-19 lab error that resulted in 206 false-positives — the Saskatchewan government has not held a COVID-19 news conference since July 7, which ended with Moe and chief medical health officer Dr. Saqib Shahab shaking hands.

“The premier shook Dr. Shahab’s hand and basically said to the province, ‘You’re on your own. We’re not showing up anymore,'” Meili said.

The province has said it currently has no plans to implement province-wide restrictions or vaccination mandates.

On Tuesday, in a letter to First Nations in the province, Indigenous Services Canada’s medical health officer for Saskatchewan warned that the delta variant is being spread through gatherings like sporting events, family reunion and summer camps.

Besides strongly encouraging everyone aged 12 and older to get fully vaccinated against COVID-19, Dr. Ibrahim Kahn also called on everyone to wear masks indoors or where physical distancing is not possible.

“The more these public health measures are followed, the less likely our health staff will be overwhelmed with COVID-19 cases,” Kahn wrote.