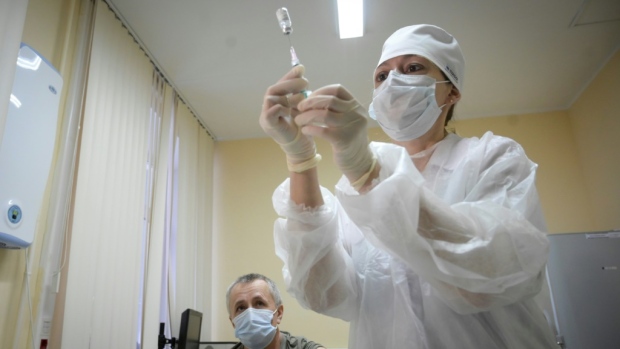 MEXICO CITY — Mexico approved the Russian coronavirus vaccine Sputnik V for use Tuesday, just hours after the publication of early results of an advanced study saying it is about 91 per cent effective.

Assistant Health Secretary Hugo Lopez-Gatell, the government’s pandemic spokesman, said the health ministry signed a contract Monday for 400,000 doses of Sputnik V that will arrive this month. That is still a tiny amount for Mexico’s 126 million people.

It couldn’t come a moment too soon. Mexico has been hit so hard that hospitals in the capital were 87% full, and ambulance drivers waited hours to find an open bed for patients. Mexico has reported about 159,500 test-confirmed deaths related to COVID-19, but excess-death estimates place the real toll at well over 195,000.

“Unfortunately, because of the saturation of the hospitals and the phone lines, we are waiting about three or four hours before they can assign us a hospital, and to get there,” said ambulance crew chief Eduardo Vigueras.

Vigueras noted patients are sometimes sent to the only available beds at hospitals, far away from the overwhelmed east side borough of Iztapalapa. He said some relatives get angry and aggressive with paramedics because of the delays in treatment.

Because some patients are in such bad shape, some families make an even harder choice. Paramedics say they often go to pick up a seriously ill coronavirus patient only to find their loved ones want to cancel the emergency call, because they know treatment is in such short supply and they may never see their relative again.

“A lot of people prefer to keep their relative at home, knowing that they are going to die, but with their loved ones there for the last few minutes, hours, days,” paramedic Paulina Cervantes said.

That desperation was on display Tuesday, when the Mexican government launched a new website for people over age 60 to register for appointments to get vaccines that the country doesn’t yet have.

So many people logged on that the Health Department apparently didn’t have the bandwidth to handle requests. The department’s website was quickly overwhelmed and the registration page didn’t load, returning a message: “Due to the overload of registrations, service has been interrupted. We are correcting and strengthening our infrastructure to avoid such interruptions.”

The Russian vaccine would become the third to receive emergency approval in Mexico. The regulating agency approved the Pfizer vaccine in December and AstraZeneca’s in January. Mexico turned to the Russian vaccine following delays in obtaining others it was counting on.

A dozen countries have already approved the Russian vaccine for use, including Bolivia and Argentina, where Lopez-Gatell visited in January to learn more about it. He acknowledged that there had a been a “legitimate concern” among Mexicans, but that the early results published Tuesday in the medical journal The Lancet should alleviate them.

“The Russian Sputnik V vaccine is safe, it has 92% efficacy against COVID, it can be used safely and is effective in seniors,” Lopez-Gatell said. “It allows us now to accelerate the step of vaccination against COVID in Mexico.”

Mexico has so far given about 675,000 doses of vaccine, all of them from Pfizer. On Tuesday, a second batch of the active substance in the AstraZeneca vaccine arrived in Mexico, where it will be packed and distributed through the rest of Latin America.