Canada is expected to spend a record $308 billion on health care in 2021 amid the COVID-19 pandemic, a new report from the Canadian Institute for Health Information (CIHI) says.

The report, published on Thursday, says the country’s total health spending is expected to have increased by more than 12 per cent between 2019 and 2020.

According to CIHI, this is a rate of spending that the country hasn’t seen in more than 30 years.

“This is triple the growth rate experienced from 2015 to 2019, which was steady at approximately 4% per year,” the CIHI press release reads.

The data says the country’s planned health expenditure is expected to represent 12.7 per cent of Canada’s gross domestic product in 2021, after a high of 13.7 per cent in 2020.

In the press release, CIHI President and CEO David O’Toole said COVID-19 resulted in the “single biggest increase in health spending we have ever seen in this country.”

O’Toole said an aging population and the continued pandemic will “no doubt put more strain on our health systems and take up a larger proportion of government budgets.”

The CIHI report says currently, health spending in Canada represents around 40 per cent of the country’s total provincial and territorial budgets.

Brent Diverty, vice president of data strategies and statistics at CIHI, said while health spending always increases overall in Canada, he expects costs related to managing the outbreak will also drop as the COVID-19 pandemic winds down.

“However, one of the questions will be whether costs related to pandemic preparedness for the future need to remain,” he told CTVNews. “So I think that will be something to watch.”

Diverty said while Canada has never really experienced declines in health spending, the annual rate of spending has declined before.

“But overall the numbers always tick up,” he said. “So is this a new level from which we’ll jump off? I think that’s what we’ll have to watch in the future.”

Diverty said the report’s data for 2020 and 2021 are the planned expenditures of governments and health systems in Canada.

“As those wash through the system, then we’ll update the report with the actual expenditures that took place,” he explained.

WHERE IS THE MONEY BEING SPENT?

More than half of Canada’s health spending is expected to continue towards hospitals, drugs and physician services, the report found.

Hospitals are expected to account for 25.1 per cent of Canada’s total health expenditure, while drugs and physicians account for 13.9 per cent and 13.5 per cent of the spending, respectively.

According to CIHI, the amount of money spent on health varies across Canada’s provinces and territories.

Per person health spending is expected to be highest in Canada’s territories, with $14,111 being spent in Yukon, $23,023 in Nunavut and $20,365 in the Northwest Territories.

Here’s how much each of the provinces is forecasted to spend per person in 2021: 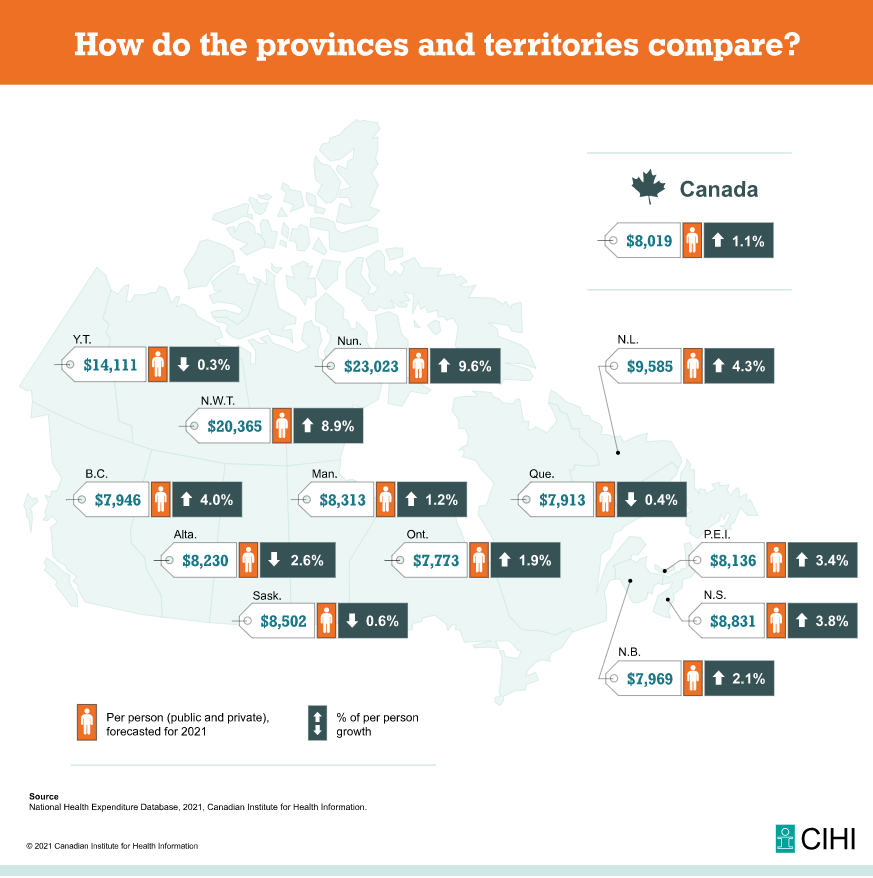 About 75 per cent of the country’s total health expenditures are expected to be paid for by the public sector, the CIHI report says.

According to CIHI, 65.6 per cent of that will come from provincial and territorial governments, while the remaining 9.1 per cent will be paid for by other parts of the public sector.

Twenty-five per cent of the country’s health spending is covered by the private sector.

Out-of-pocket spending accounts for 12.1 per cent of the expenditure, while private health insurance (10.6 per cent), and non-consumption (2.6 per cent) account for the remainder.

This marks a significant change from the 70 to 30 per cent split between the public and private sector, respectively, that Canada had experienced fairly steadily from the early 2000s until 2019.

According to Diverty, the shift occurred due to the pandemic-related expenditures which have been funded by public dollars. However, he said this will likely shift back as the pandemic winds down.

“We would expect that that will move back towards 70-30,” Diverty explained. “I’m not sure the rate of it, but it really depends on whether these COVID specific expenditures continue and for how long they continue to be needed and where they’re applied.”

HOW DOES CANADA STACK UP INTERNATIONALLY?

Included in the CIHI report is a comparison of Canada’s health spending against 38 other countries who are members of the Organisation for Economic Co-operation and Development (OECD).

According to the latest data available, Canada ranked among the highest spenders in 2019, spending $6,666 per person on health care, with the expenditure accounting for 10.8 per cent of the country’s GDP.

Diverty said Canada’s position among OECD members in 2019 is “where we tend to be.”

“We spend more than the average of our OECD colleague countries, and we tend to cluster with a group of countries that includes a number of European countries, with the U.S. much higher,” he explained.

While Diverty said it’s too soon to know whether Canada’s position among the OECD countries will change for 2020 or 2021, he said the next few years will be “very interesting.”

“Because then we can bring the COVID-19-related expenditures into the equation and see how we fared on those,” he said. 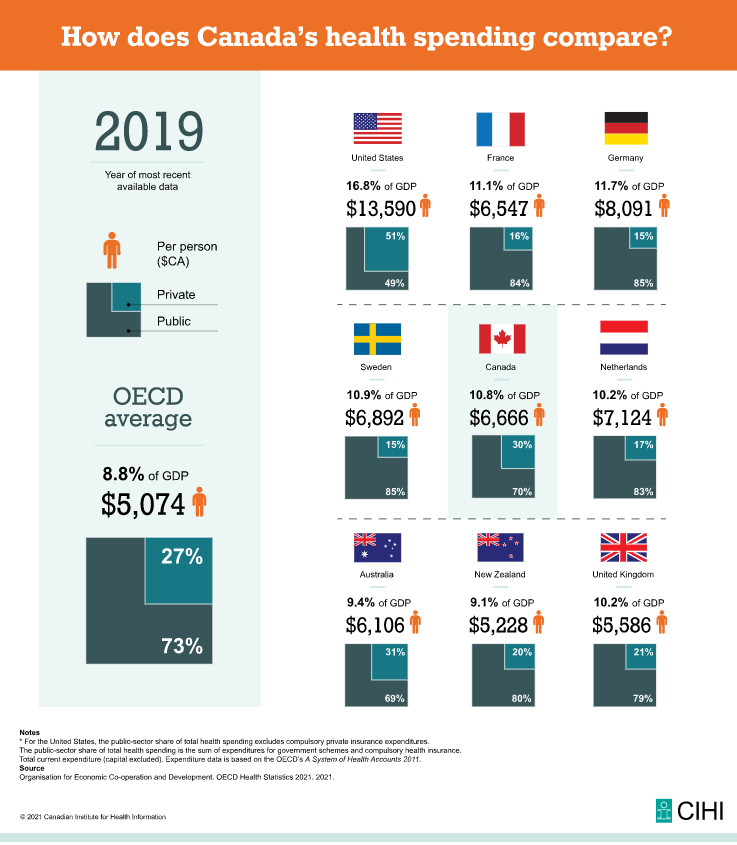