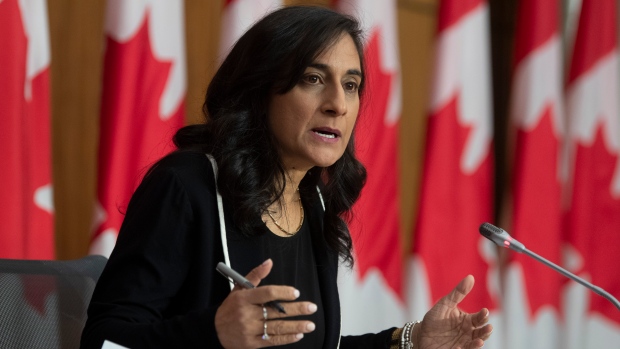 OTTAWA — With pressure to increase the supply of vaccines, Procurement Minister Anita Anand is sounding the alarm over “a number” of suspicious entities offering to sell what are likely counterfeit doses of vaccines to governments in Canada.

In an interview on CTV’s Question Period airing on Sunday, Anand said that her department has had “a number of intermediaries or suppliers offering to sell us doses” of major vaccines and that the offers were referred to the RCMP.

“We believe that they are somewhat of a security concern,” Anand said.

The minister said her department was surprised by these entities posing as suppliers trying to sell doses of vaccines, including Pfizer and AstraZeneca shots, given the government is in close touch with these companies about what vaccines are coming into Canada and when.

Anand did not specify who is making these offers for rushed additional vaccine doses — something Canada’s been waiting on — other than to describe them as “private companies, individuals [and] suppliers.”

“They are under investigation now so I will leave that to the RCMP and the investigative process. But that’s to say that we are guarding our vaccine supply chain very carefully,” she said.

While the minister said it’s something the RCMP is investigating, the agency’s national division would not confirm the status of the file.

“To fulfil our mandate, we maintain lines of communications with many federal agencies including Public Services and Procurement Canada. The pandemic has created large procurement opportunities which led to PSPC and the RCMP to exchange communications. However, we are not able to comment any further on the matter at this juncture,” said the RCMP in a statement.

The minister said she’s concerned about what are either attempts to sell phoney vaccines or outright scams targeting other jurisdictions, including Canadian provinces and municipalities.

“There [have] certainly been examples of attempts to sell fraudulent products or at least—just like what you would expect with other products—attempts by different entities to try and convince us at different levels that they have access to quantities and that they can provide in the millions different types of vaccines,” said Maj.-Gen. Dany Fortin in a separate interview.

He encouraged provinces or territories to let the federal government know if they receive similar offers, and they’ll ensure law enforcement and national security agencies take “the appropriate actions.”

Anand likened the current suspect vaccine offers to the “wild west” she experienced when looking to procure COVID-19 personal protective equipment, like N95 masks, in the early days of the pandemic, which included illegitimate entities offering ineffective products.

The federal government has alerted the major vaccine manufacturers in an attempt combat these attempts, with both Pfizer and AstraZeneca confirming to CTV’s Question Period that these offers for doses are not for legitimate supplies of their vaccines.

“Over the past several weeks we have become aware of a few organizations that have reached directly out to the federal and provincial governments in an attempt to sell AstraZeneca/Oxford vaccine,” said AstraZeneca’s head of corporate affairs Carlo Mastrangelo in an email. “We have communicated to the governments that if an organization is offering the private supply of our AstraZeneca/Oxford vaccine, it is likely not a legitimate offer. We have also reached out to the RCMP.”

Pfizer Canada’s director of corporate affairs Christina Antoniou said the company is aware of “fraudulent emails to Canadian government authorities providing procurement offerings” for its vaccines, and that their shots are “only available” through Pfizer and “cannot be procured through any ‘broker’ or ‘distributor’ claiming to have procurement or distribution authority of the vaccine.”

“We are taking meticulous steps to reduce the risk of counterfeiting, and we track trends very carefully and have processes in place to identify threats to the legitimate supply chain,” Antoniou said.

Canadians are cautioned to not try to secure vaccines online, and to only get vaccinated at certified locations by approved administrators.

With files from CTV News’ Ian Wood and Noah Richardson