Dionne Warner faced nine bouts of cancer over 25 years and died the same way she lived — on her own terms, with as much laughter as possible.

The vibrant 55-year-old Regina woman opted for medical assistance in dying (MAID) at her home Monday afternoon, after cancer made a final “savage” attack, said her husband, Graham Warner.

“It is with a heavy heart, I announce the passing of my radiant, beautiful and courageous wife,” Graham said, adding MAID allowed Dionne to have control and die with “grace, dignity, and comfort.”

Graham, a pilot who called himself his wife’s “wingman,” said he wanted to discourage people from suggesting she had “lost her battle to cancer,” and urge them to instead focus on Dionne’s “superstar” performance.

Over the years, Dionne received numerous awards — including the YWCA Women of Distinction and American Cancer Society Hero of Hope awards — for being an inspiration to cancer patients and survivors.

The Canadian charity Look Good Feel Better, which runs workshops to help cancer patients cope with physical effects of treatment, including loss of hair, eyelashes and eyebrows, recognized Dionne in 2017 for her public advocacy and efforts to empower women. Dionne said she refused to let cancer steal her sense of self or pride in her appearance.

Dionne, originally from Mississauga, Ont., was 30 when she was first diagnosed with cancer — breast cancer — in 1995.

After that, the cancer went into remission, then recurred eight times in different parts of her body, including brain, bone, lung, and liver. She experienced pain, nausea, exhaustion, hair loss, surgeries and countless hours of gruelling treatment.

In 2009, after seven years of remission, doctors told her she had Stage 4 cancer in her bones, lungs and liver.

Once again, with chemotherapy, the cancer went into remission, but eventually recurred.

“I will never say the journey has been easy,” she wrote to her supporters in an online letter after her eighth diagnosis. “I always give myself 24 hours to say ‘Why me?’ and then after those 24 hours, I would come to my senses and say ‘Why not me?’ and what am I going to do to fight back.”

On her back, Dionne had tattoos of the words “Believe,” “Hope” and “Courage.” And she consistently shared all three with other cancer patients at Regina’s Allan Blair Cancer Centre, where she volunteered.

Bernie Felix, 71, from Lumsden, Sask., said he was inspired by Dionne when he met her during his chemotherapy for Hodgkin’s lymphoma in 2005.

“She was like a ray of hope for all of us in the clinic,” he said.

Felix said he’ll always remember a moment that happened while he was sharing some laughs over coffee with Dionne and a nurse.

“Dionne was getting fairly loud, which she was known for. She was always very lively,” he said. Felix said he started to worry they were disturbing people in the waiting room. “Maybe we need to turn it down a bit,” he suggested.

Dionne and her husband would often shake things up at the cancer clinic. The couple shared a flair for the dramatic and famously sported different costumes — from disco sparkle pants to rocker animal print Spandex, plus dozens of T-shirt combos — to Dionne’s chemotherapy appointments, often dancing into the clinic with music pumping.

“It just snowballed into so many different themes because we thought, ‘Everybody is just loving this and we’re having so much fun,'” Dionne told CBC News in 2015. “Friends were saying, ‘Have fun at chemo!'”

‘A normal girl who had my back’

When Greenwood had a difficult time dealing with her own cancer diagnosis in 2004, she approached Dionne for advice.

Dionne told her: “Live your life to the fullest. Every day is a gift.”

When Greenwood got back to her office after lunch, she found a present from Dionne sitting on her desk: a tiny angel figurine with her arms raised in victory.

The two became close friends and Greenwood was at Dionne’s side Monday afternoon for her medically aided death.

“You could probably interview a thousand people and they’re all going to use the same words [to describe Dionne]: brave, courageous, inspirational, loving, kind…. She is all of those things, but she’s also just one of my best friends and a normal girl who had my back.” 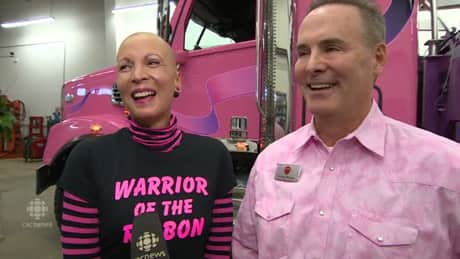 Dionne Warner has been diagnosed with cancer eight times. Now, her husband has given her a pink tow truck. Dionne calls it the “best gift ever.” 2:05

Making every moment special, in life and death

Dionne had been battling her ninth bout of cancer for three years. Last April, she and her husband celebrated CT scans that showed tumours had shrunk in her neck, liver, lower back, stomach lining, hip bones, and left lung. Graham surprised Dionne with a physically-distanced parade past their house.

But then, in late December, the disease’s spread had overpowered her body and made death imminent.

Crystal Kalyniuk, another longtime friend, said it was time for her sassy, spunky friend “to exit on her own terms.”

Dionne always had a gift for “making every moment special, and special moments spectacular,” she said.

Final moments were meaningful ones

She loved grand gestures and and simple pleasures, including soaking in sunsets, ripe canola fields, and hoar frost on trees.

So it was no surprise that Dionne wanted to have both symbolic and silly touches in her final moments, including drinking a favourite cocktail and ringing a bell, a ritual for cancer patients at the end of their treatment road.

In all her years of treatment, Dionne had never rung the bell.

“To be a part of that, it’s just such an honour,” said Kalyniuk. “It’s such an honour to watch this beautiful woman exit into her next journey.”

As she prepared for it, Kalyniuk dug through Dionne’s old photos and found what her friend — then Dionne Walford — wrote in her high school yearbook: