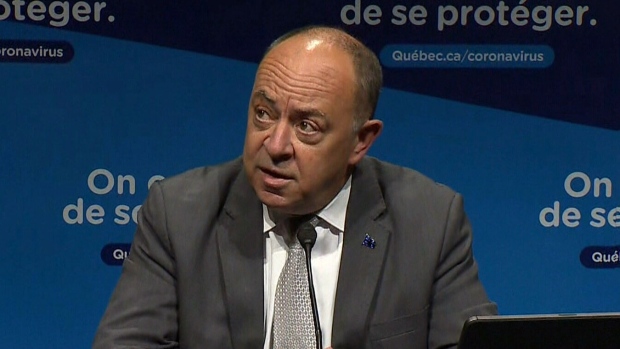 MONTREAL — Some Quebecers will be able to download a new mobile app for the vaccine passport Wednesday morning as the province says it’s ready to limit some non-essential services to only vaccinated people.

The VaxiCode app will be ready to be downloaded by more than five million Quebecers in the Apple App Store at 8 a.m. The app will roll out to Android users in the Google Play store later this week.

The app is still being tested at local businesses throughout Quebec, but Health Minister Christian Dubé made it clear: “We are now ready to start September 1.”

Quebec’s health minister said the vaccines are a “passport for freedom” and is a tool designed to prevent locking businesses down as cases and hospitalizations rise in the middle of the fourth wave of the pandemic.

“We can no longer let unvaccinated people fill up our hospitals, so we must protect the health of the population,” said Dubé at a news conference Tuesday afternoon.

Quebec was the first province to announce the vaccine passport, which will be used for access to non-essential services, including indoor dining at restaurants, gyms, live events, theatres and some stores. Dubé also said it will apply to “physical activities with frequent or prolonged contact,” such as team sports.

As of Sept. 1, residents will have to present their QR code in the new VaxiCode app to access the non-essential services. The app will include a QR code that will store the user’s vaccine information and it will show a green or red pass depending on the person’s vaccination status.

In addition to the vaccine passport, residents will also be required to present photo ID so that the person scanning the app can prove their identity shown on the QR code. The person’s name will be visible on the app.

Residents who do not wish to use the smartphone app can have their proof of vaccination mailed to them or they can print it out on their own.

A second app will also be made available under the vaccine passport system — VaxiCode Verif — which is meant to be used by businesses in order to scan and read a consumer’s digital or paper-based proof of vaccination. People will also be asked to show their photo ID to prove their identity matches the name on the QR code.

The province said it will give a grace period before handing out financial penalties for restaurants and other businesses who fail to enforce the vaccine passport requirements. Beginning Sept. 15, businesses who don’t check people’s vaccination status can face fines up to $6,000.

The minister of health said the rules will be enforced the same way the masking policy was enforced earlier in the pandemic. In serious cases, restaurants, for example, could face closure if they fail to enforce the new policy.

“Somebody who goes into a restaurant and doesn’t want to wear a mask, well, it’s unfortunate, but the business will have to say, ‘Well, listen, I’m sorry, sir or madam, you have to leave and if they don’t leave well they call, they call security.”

WHAT ABOUT TRAVELLERS TO QUEBEC?

The health minister told reporters Tuesday during the briefing that the vaccine passport system will be able to accomodate people who live outside of Quebec as well. So, people visiting from Ontario, for example, or international travellers will need to present their official proof of vaccination provided by their own jurisdictions in addition to their photo ID.

The health minister said there are no other additional requirements for visitors to Quebec who want to access places like restaurants and live events.

How vaccine passports will work in Quebec, some highlights:
-two different apps: VaxiCode for customers, VaxiCode Verif for businesses
-Health Canada working with provinces to align different apps/frameworks so they can be standardized @CTVMontreal @CTVNews (1/x)

EXCEPTIONS FOR PEOPLE WHO CANNOT GET VACCINATED

There will be some measures in place for people who cannot receive their vaccine doses due to medical reasons, Dubé said.

For the “very rare” cases where people are exempt from vaccinations, Dubé said “a directive will be sent to doctors, and they can fill out a form, and then we will enter it in the vaccination registry so that people can also get the green light on their application.”

There have already been cases reported of people trying to fake their proof of vaccination, something federal officials are monitoring as more provinces announce plans to follow Quebec’s lead and introduce their own version of the vaccine passport.

In Montreal, people have allegedly bribed health-care workers in order to get phony proof of vaccination. Police are investigating after there was a report that a person allegedly offered a nurse at a vaccination clinic a bag containing several hundred dollars in cash on the condition that she throw the vaccine in the garbage and give him a faked proof of vaccination.

On Tuesday, Dubé said people could face charges under the Criminal Code for faking an official document and face a fine ranging from $1,000 to 6,000.

“The minute you have something that is criminal on your case you cannot travel. So I think the cost of that in terms of quality of life is so huge,” he said.

“I don’t know why somebody would take that risk for something that you can get a vaccine for free.”

Canadians who want to report COVID-19-related frauds, including fake test results and records, should contact their local police and report it to the Canadian Anti-Fraud Centre (CAFC) toll free at 1-888-495-8501 or online at antifraudcentre-centreantifraude.ca.