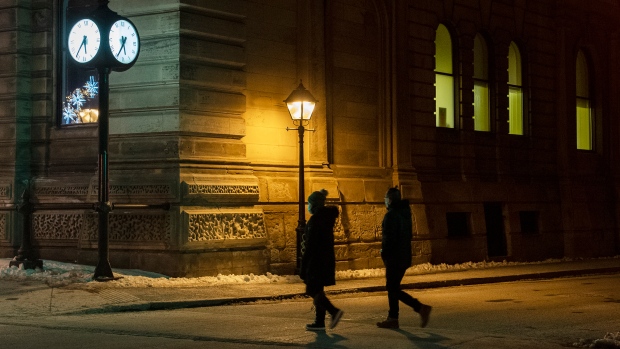 “People are getting fed up with the uncertainty.” Roger McIntyre, a psychiatry and pharmacology professor from the University of Toronto, told CTV News Channel on Sunday.

McIntyre understands how maddening it must be for Quebecers to contend with yet another measure when they are already facing economic strife under COVID-19 public health restrictions.

“This is really an anti-motivation time,” McIntyre, head of the Mood Disorders Psychopharmacology Unit at the University Health Network, said. “We got not only this virus, but we have the incredible loneliness that goes along with being asked to stay home.”

Everything is compounding in what he calls, “malignant uncertainty,” which he says isn’t conducive to people’s well-being.

The curfew was spurred on by Quebec’s dismal COVID-19 figures. Just this weekend, the province broke a record for daily COVID-19 cases, with over 3,100 new cases on Saturday.

The nightly curfew, which lasts until Feb. 8, is the first of its kind in Canada and has few exceptions, requiring residents to be in their homes from 8 p.m. until 5 a.m. each night. That forced time at home will likely increase feelings of isolation, McIntyre said.

‘VACCINE’ FOR LONELINESS IS ‘CONNECTING WITH PEOPLE’

“It’s really important to underscore how, coming into this pandemic, about half of our population was already reporting themselves as feeling incredibly lonely,” McIntyre said, appearing to cite an Ipsos poll from last April.

And until approved vaccines are given to the general population, “the ‘vaccine’ against this terrible distress is connecting with people,” McIntyre said. “Literature shows that it not only takes the edge off but gives us a sense of better well-being.”

He urged people to keep reaching out to each other online or over video services such as Zoom, but also stressed the “elementary” importance of a good, balanced diet and regular sleep.

Treating yourself with artistic pursuits, reading or arts, for example, is key to people reportedly feeling less lonely, distressed, irritable and uncertain as well, McIntyre said. He added that even though it’s cold in most parts of the country for people to go outside: “Prescribe yourself some activity.”

This could even be as simple as going on brief walks. McIntyre said doubling down on all of this is “pretty basic and it works. It absolutely works” at improving quality of life.

WILL THE CURFEW BE EFFECTIVE?

On the first night of the curfew, less than two dozen tickets were given to protesters, but a civil rights lawyer expressed worry about how the curfew would be enforced and who’d be disproportionately affected by it.

“We know that police attention is disproportionately focused on certain populations and certain neighbourhoods,” Cara Zwibel, a lawyer for the Canadian Civil Liberty Association, told CTV News Montreal. “It tends to be people who are socio-economically disadvantaged, racialized people, Indigenous that are the target of greater scrutiny by the police.”

As to whether Quebec’s move will work, research from France in November showed its curfews were able to slow the spread of COVID-19, at least for certain age groups. The study found that the country’s curfews that began in October did slow the infections, with the strongest effect for those 60 years old and older.

However, for everyone younger, it appeared that overall lockdown methods was the bigger factor.

One expert reminds everyone that curfews won’t solve the explosion of cases on its own.

“It’s just another tool to use in addition to the other public health measures,” Dr. Ronald St. John, former director-general of the Centre for Emergency Preparedness and Response, told CTV News Channel on Sunday.

“We can wash our hands, we can wear a mask, we can keep our social distance, we can reduce the number of contacts and now with a curfew, we can stay home,” he said. “It’s a limited number of tools.”