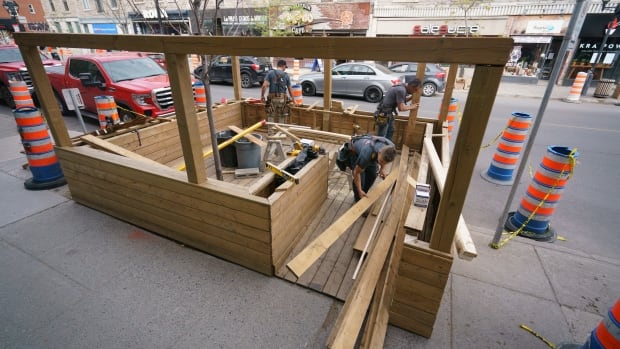 Quebec’s premier says life will start returning to normal gradually, with the curfew lifting across the provinces on May 28 and masks no longer mandatory in most situations by the end of August.

“This is a big day. A big step,” Premier François Legault said on Tuesday.

Eating on patios and decks outside of restaurants will begin when the curfew is lifted, and people will be allowed to gather in groups of eight on private properties, but outdoors only.

The vast majority of the province will be an “orange zone” as of May 31, which means indoor dining at restaurants will be allowed and gyms can reopen.

All kids will be sent back to school full time as well. As it stands in Quebec, third-year high school students and above have been going to school every other day.

Starting June 25, people who have had two doses will be allowed to gather indoors without distancing.

Festivals will also be allowed, summer camps will open and large entertainment venues will be welcoming up to 2,500 people with 250 people per section.

By the end of August, most mask requirements will be lifted, except for perhaps public transit and a few other exceptions.

But Legault said this success relies on everybody to do their part by getting vaccinated. Quebec set a goal of administering the the first vaccine dose to 75 per cent of adults by June 24, but now officials expect to reach that goal by June 15, Legault said.

Health Minister Christian Dubé said it may be possible to speed up the rate of delivering the second dose, ensuring people can gather indoors without masks even sooner.