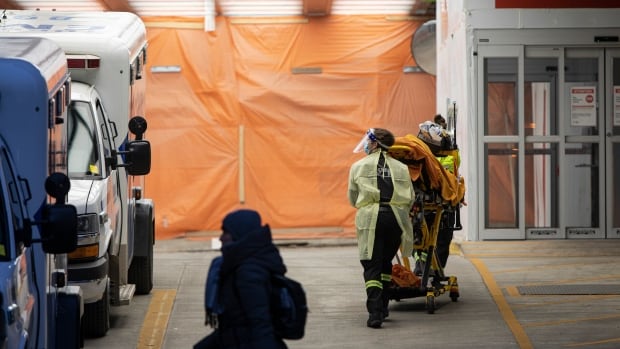 At 3 p.m., Ontario’s chief medical officer of health is set to provide a briefing on the COVID-19 situation in the province.

The provincial government is opening a new hospital in Vaughan to help relieve pressure on other facilities in the Greater Toronto Area.

The Cortellucci Vaughan Hospital was originally scheduled to open in early February as the first brand new hospital — not a replacement of an older facility or a merger with an existing facility — in Ontario in almost three decades. Premier Doug Ford made the announcement at a Monday afternoon news conference, saying it would open in “a few short weeks.”

Health Minister Christine Elliott also said Monday that once the situation with COVID-19 has stabilized in the province, the hospital will open as originally planned.

“The idea is this hospital is going to be used … in order to take the load off of some other hospitals that are experiencing capacity challenges.” Elliott said.

The news comes as Ontario reported 2,578 additional cases of COVID-19 on Monday, as the number of patients with the illness who required a ventilator to breathe climbed above 300 for the first time since the pandemic began.

The new cases in today’s update are the fewest logged on a single day in about two and a half weeks. They include 815 in Toronto, 507 in Peel Region, 151 in both York and Niagara regions, and 121 in Hamilton.

The additional infections come as the province’s labs processed just 40, 301 test samples for the novel coronavirus — tens of thousands fewer than there is capacity for in the system — and reported a test positivity rate of 6.6 per cent.

Another 2,826 cases were marked resolved in today’s report. There are now 28,621 confirmed, active infections provincewide. The number of resolved cases have outpaced new cases on six of the last seven days in Ontario.

There were 1,571 total patients with COVID-19 in Ontario’s hospitals. Of those, 394 were being treated in intensive care units and 303 were on ventilators.

Revised projections released last week by the province suggested that hospitals, especially those throughout southern Ontario, risk being overwhelmed by COVID-19 patients in the coming weeks. The influx could result in doctors having to triage emergency patients, running the risk that some will not get a hospital bed when needed.

This morning, the Ontario NDP released a document they say is the province’s triage protocol. Dated Jan. 13, the 32-page document outlines the details and critical elements of the triage process should there be a major surge in COVID-19 patients requiring hospital care.

The protocol, which the document says should be considered only “as an option of last resort,” prioritizes care for those “with the greatest likelihood of survival.” It emphasizes the need for protection of individual human rights, non-discriminatory decision making and accountability.

In a news release, the NDP said the triage protocol “shows that the crisis in hospitals is out of control” while accusing Premier Doug Ford and his government of trying to keep it out of public view.

“Had physicians not reached out to the Official Opposition and others, the directive that was written in secret, without consultation, would remain a secret,” the NDP said.

Public health units also reported another 24 deaths of people with the illness, pushing the official toll to 5,433.

City officials said the “proof-of-concept” clinic will help Ontario’s Ministry of Health test and adjust the setup of immunization clinics in non-hospital settings.

The clinic at the Metro Toronto Convention Centre, which is in the downtown core, aims to vaccinate 250 people per day, but the city noted that is entirely dependent upon vaccine supply.

The Ministry of Health said this morning that another 9,691 doses of COVID-19 vaccines were administered in Ontario yesterday. A total of 209,788 shots of vaccine have been given out so far, while 21,752 people have received both doses and are considered fully immunized to the illness.

Pfizer-BioNTech, which manufactures one of the two Health Canada-approved vaccines, announced last week that it’s temporarily delaying international shipments of the shots while it upgrades production facilities in Europe.

The Ontario government has said that will affect the province’s vaccine distribution plan, and some people will see their booster shots delayed by several weeks.

Officials in Hamilton, meanwhile, said the province has directed it to temporarily cease administering the first dose of both the Pfizer-BioNTech and Moderna vaccines to everyone except residents, staff and essential caregivers at long-term care homes and retirement facilities.

A spokeswoman for Health Minister Christine Elliott did not say how many regions of the province had received that directive.