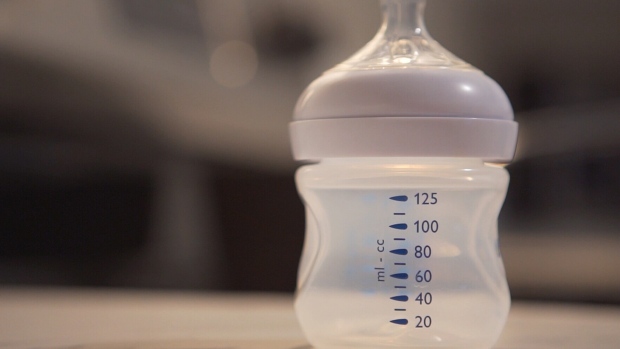 TORONTO — A new study investigating microplastics has found that baby bottles made of polypropylene release millions of these plastics during the process of sterilizing, rinsing and preparing baby formula in a bottle — highlighting the need for more research into the effect microplastics have on the human body.

The research, published Monday in the journal Nature Food, tested 10 types of baby bottles sold around the world, all made of polypropylene plastic.

The 10 bottles represented “68.8 per cent of the global infant-feeding bottle market,” according to a press release on the study.

Researchers washed and sterilized them with hot water, following international guidelines for formula preparation by then filling the bottle with water at 70 degrees Celsius and shaking it for 60 seconds to simulate the process of actually mixing the water with powdered baby formula.

What they found was that during this process, the bottles released millions of tiny plastic particles — a number that only went up as the temperature of the water increased.

“We were absolutely shocked and we were hugely worried,” John Boland, one of the study’s authors and a professor at Trinity College in Dublin, told CTV News. “It meant that most babies, one-year-old babies, were consuming on [average] a million microplastic particles a day.”

They also used the data to map the levels of microplastics in different regions across the globe. The average daily consumption of these microplastics by infants per capita was 1.5 million, the research found.

North America, Europe and Oceania had the highest levels of potential exposure worldwide, with roughly 2.3 million, 2.6 million and 2.1 million respectively.

The researchers calculated that based on plastic bottle sales, babies in Canada likely consumed between one and two million tiny plastic particles per day.

What does this mean for infant health? Researchers aren’t sure, but believe the sheer volume of microplastics potentially coming into contact with the infants is reason enough for more investigation.

Very little is currently known about microplastics, and how they could affect humans, but increasingly, they are being detected in substances we ingest. A report published last year by the World Health Organization (WHO) investigating microplastics in drinking water found that there “is currently no evidence to suggest a human health risk from microplastic-associated biofilms in drinking-water,” but added that further research needed to be done.

In this recent study focusing on baby bottles, researchers also found that more plastic was released as the temperature of the water used to clean the bottles increased.

Meanwhile, at 25 degrees Celsius — far too cool to pass international guidelines for proper sterilization — only around 600,000 plastic particles were released.

But temperature was not the only factor that changed the amount of microplastics leaching out from the bottle.

“What was really surprising is that if you have room temperature water, and you just shake it for a minute, you release hundreds and thousands of microplastics,” he added. “Mechanical agitation of the [bottle] also releases microplastics. And so that was surprising.”

The numbers sound alarming, but researchers stressed that the study didn’t prove harm, only the presence of these microplastics.

“We don’t know what the health implications are,” Boland said. “But […] in the interim, we should take whatever steps we can to mitigate against the level of risk.”

There is evidence microplastics are linked to chemicals that disrupt hormones and metabolism, according to Dr. Leonardo Trasande, Director of the NYU Center for the Investigation of Environmental Hazards, so more research into the subject is sorely needed.

Trasande told CTV News that if microplastics do negatively impact humans, children could be more at risk.

“What we don’t know are the effects of microplastics directly on human health,” he said. “But when you see microplastics, what you know is along for the ride are smaller versions of plastic chemicals. Children are uniquely vulnerable to the effects of these chemicals because, pound per pound, they eat more food and drink more liquids.

“Younger children and infants are susceptible also because their organs are just developing. And if you disrupt a child’s development of the brain or their metabolism, you literally can have permanent and lifelong consequences.”

He pointed out that other organizations, such as the American Academy of Pediatrics, the Endocrine Society and the International Federation of Gynecology and Obstetrics, among others, have “raised concerns about synthetic chemicals such as those used in plastics and their effects on the hormones in our bodies.

“So this is a serious and global public health threat.”

So what should concerned parents do? With this question in mind, researchers came up with a set of recommendations for how parents should prepare formula to minimize the risk of microplastics being released from the bottles.

They laid out these steps their press release.

WHAT PARENTS CAN DO

Some other precautions the researchers said parents can take is to never reheat prepared formula in plastic containers, and avoid reheating with the microwave if possible, as well as avoiding shaking the formula inside a plastic bottle.

They also suggest using boiled water that has cooled to rinse the bottles out.

Trasande said there are also a growing number of non-plastic options for bottles.

Researchers said they weren’t trying to sow fear, but merely keep parents informed about what they are finding.

In response to this new study, the American Chemistry Council’s Plastics Division said in a statement that “while the Trinity College Dublin study reports finding microplastics, the authors do not claim that plastic is unsafe or presents a health risk.

“It is important to understand that detecting something does not mean that it presents a health risk.”

They added that they “completely understand parents’ concern for the safety and health of their children.

“They should know that the safety of plastics used in contact with foods, including baby bottles, is very well regulated in both the U.S. and Canada with the help of expert scientists in these countries’ respective food and drug agencies,” the statement said, mentioning also that the U.S. Food and Drug Administration (FDA) takes temperature into account “as part of its regulatory approach to food contact.”