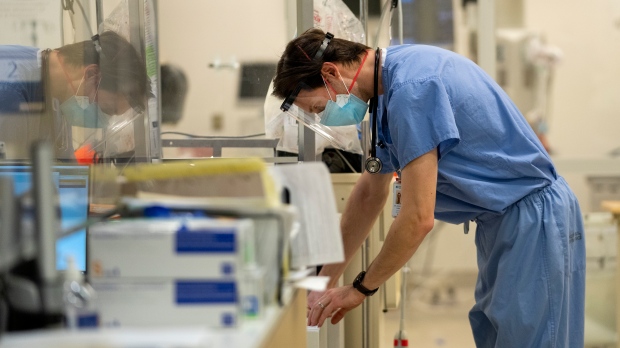 TORONTO — Preliminary data from a new survey released on Wednesday shows that burnout among doctors in Canada appears to be getting worse amid the pandemic.

The Canadian Medical Association’s (CMA) National Physician Health Survey, which was conducted in November 2021 and received more than 4,000 responses, shows that 53 per cent of physicians and medical learners have experienced high levels of burnout, compared to 30 per cent in a 2017 study.

The survey also found that 46 per cent of doctors are considering reducing their clinical work in the next two years. As well, 47 per cent reported low levels of social wellbeing, compared to 29 per cent in 2017.

“It’s a really concerning finding because we know already there’s a major access to care issue in this country with at least five million Canadians more unable to find a primary care provider or a family doctor,” CMA president Dr. Katharine Smart told CTV’s Your Morning on Wednesday. “That is a real concern for Canadians in terms of who’s going to continue to provide the care.”

In addition, 59 per cent of physicians said that their mental health has worsened since the start of the pandemic. Among these respondents, 57 per cent attributed their worsened mental health to the increased workload and poor work-life balance and 55 per cent blamed administrative burdens.

Smart says these administrative burdens include having to deal with electronic medical records “that often aren’t working well” as well as the increasing number of forms to fill out.

“The biggest issue that we’re hearing from physicians is the workload and the inability to meet the needs of their patients because of so many systems issues accompanied by increasing administrative burdens, which are really taking people away from that relationship with their patients, being able to provide the care they want,” Smart said.

Even though COVID-19 cases and hospitalizations are considerably down from their peak, Smart says many hospitals continue to operate at over capacity as they try to clear the backlog of surgeries.

“I think the reality for most health-care workers right now and physicians is that they just don’t see the light at the end of the tunnel,” Smart said.

The release of the preliminary survey data comes after an emergency meeting of close to 40 organizations representing health-care workers across Canada on how to address the worsening burnout crisis in the workforce. They’re calling for a national human heath resources strategy from the federal government, better data collection and more investments in the health-care system.

“We have been doing extensive advocacy with government, really trying to inform our leaders and politicians about how dire the situation is. It’s dire with physicians, nurses and other health-care professionals,” Smart said.

“I think the first step is for the government to really own this problem, recognize that we do have a human health resource crisis in this country, that there is no health care without the people to provide it and there will be no economic recovery if Canadians aren’t healthy.”