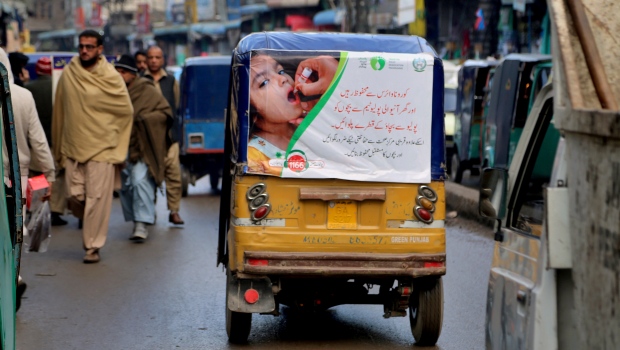 ISLAMABAD — Despite a steady rise in coronavirus cases, Pakistan on Monday launched a five-day vaccination campaign against polio amid tight security, hoping to eradicate the crippling children’s disease this year.

The drive is the first anti-polio campaign in 2021. The previous campaign took place last August — during a brief decline in fatalities and infections from the coronavirus — and included former Taliban strongholds bordering Afghanistan.

This time, polio workers will try to vaccinate 40 million children across Pakistan while at the same time following social distancing measures and other precautions due to the coronavirus, said Zulfiqar Babakhel, a spokesman for the polio program.

Supplementary vitamin A drops will be given to “help build general immunity,” he said, adding that the polio workers will don gloves and face masks and go house-to-house during the campaign.

There has lately been a steady increase in both fatalities from COVID-19 and the number of new infections in the country. Pakistan has registered more than 504,000 cases of the virus, including 10,676 deaths since the first infection was detected in February. On Monday, it reported 1,877 new cases and 32 deaths in the past 24 hours.

Pakistan had hoped to eliminate polio back in 2018, when only 12 cases were reported. But in the years since there has been an uptick in new cases.

Pakistan and neighbouring Afghanistan are the only two remaining countries in the world where polio is endemic, after Nigeria was last year declared free of the wild polio virus.

Eradicating polio requires that more than 90 per cent of children be immunized, typically in mass campaigns involving millions of health workers — a challenge under the coronavirus pandemic. The World Health Organization had initially aimed to wipe out polio by 2000, a deadline repeatedly pushed back and missed.

The Taliban and other militants regularly stage attacks on polio teams and security forces escorting them, as well as vaccination centres and health workers, claiming the anti-polio drive is part of an alleged Western conspiracy to sterilize children or collect intelligence.

These attacks increased after it was revealed that a fake hepatitis vaccination campaign was used as a ruse by the CIA in the hunt for al-Qaida leader Osama bin Laden. Bin Laden was killed by U.S. commandos in 2011 in Pakistan.