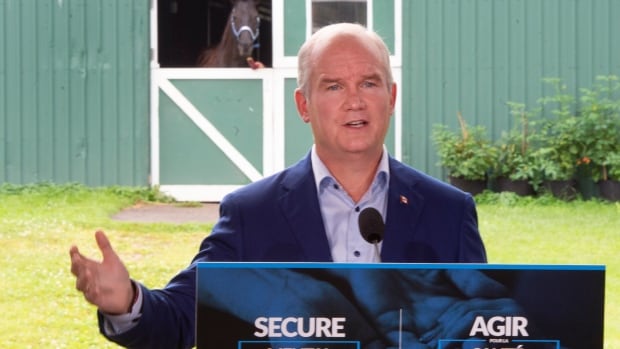 Conservative Leader Erin O’Toole today released his plan to help Canadians grappling with depression, anxiety and other mental health conditions — a multi-billion dollar platform pledge to address a problem that has only gotten worse during the pandemic.

Pointing to statistics from the Centre for Addiction and Mental Health, O’Toole said the lockdowns and restrictive public health measures of the past year and a half have taken their toll on Canadians’ well-being.

One in five people in this country have screened positive for symptoms of depression, anxiety or post-traumatic stress disorder. O’Toole said the health care system isn’t well-equipped to address such high levels of mental distress.

O’Toole said the issue is a personal one for him because his air force squadron responded to the 1998 Swiss Air disaster off the coast of Peggy’s Cove, N.S. — a gruesome mission that left many of his colleagues with what was then called “operational stress disorder.” He said the Canadian Armed Forces didn’t adequately address the trauma that his fellow air personnel experienced as a result of this disaster.

“I saw how the military was trying to treat mental health like physical health. Since I left the military, I’ve tried to work to reduce stigma, find ways to help make wellness a priority. As prime minister, Rebecca and I will make this a personal mission for the recovery of our country,” O’Toole said, mentioning his wife.

O’Toole said his platform commitment to increase the Canada Health Transfer by six per cent each year for the next 10 years would pump $60 billion into provincial medicare and help to boost mental health supports.

While O’Toole has said he would not dictate how the provinces and territories spend this new money, he said he’d work with them to ensure mental health investments are a “priority.”

He said the new federal money should give these jurisdictions enough funding for “an additional million Canadians to receive mental health treatment every year,” while also cutting waiting lists.

To encourage employers to add mental health coverage to their employee benefit plans, a Conservative government would offer a 25 per cent tax credit for three years to offset any additional costs incurred. The credit would also be available to firms that boost the coverage they already offer workers.

O’Toole said a government led by him would provide $150 million in grants to non-profits and charities that deliver mental health and wellness training.

Last year, MPs voted unanimously in favour of a Conservative MP’s motion calling on the federal government to set up a national 988 number that would consolidate all existing suicide crisis numbers.

While the motion called on the Liberal government to “immediately” establish such a phone line, the system is not yet operational. The U.S. is in the midst of establishing a national 988 service. That process is expected to take four years and wrap up in 2022.

The mental health commitment follows another announcement O’Toole made this earlier week about addiction.

He said Canada needs to take a “compassionate” approach to drug and alcohol troubles rather than one focused on law and order.

“I don’t think someone with an addiction should be punished. I think they should be helped,” O’Toole said.