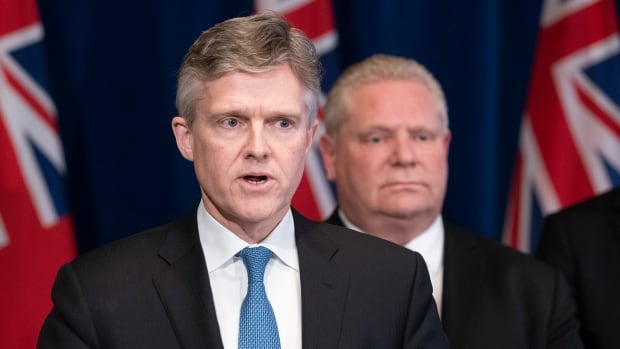 Rod Phillips said he deeply apologizes for his decision to travel abroad during this time and that there is nobody to blame but himself.

“Obviously, I made a significant error in judgment, and I will be accountable for that,” Phillips said from Pearson airport in Toronto on Thursday.

He called the trip a “dumb, dumb mistake.”

Phillips has been in St. Barts since Dec.13 and will quarantine in Ajax, Ont., for 14 days starting today.

He said earlier this week he chose to go ahead with the trip not knowing the province would be placed under lockdown on Boxing Day.

He said he will discuss his future in the provincial cabinet with Premier Doug Ford later in the day.

Phillips said he wants to keep his job but will respect Ford’s decision following what the premier said would be a “very tough conversation” between the two later today.

Ford is expected to have a “very tough conversation” with his finance minister today over the controversial Caribbean vacation.

The premier said Wednesday he wasn’t told about the trip ahead of time, but he did learn about it shortly after it began and should have demanded Phillips return immediately.

He said it’s “unacceptable” for any public official to ignore the province’s COVID-19 guidelines, which urge residents to avoid non-essential travel.

Phillips apologized Tuesday evening for leaving the country on Dec. 13 for a personal trip even as health officials pleaded with Ontarians to only venture outside of their homes for essential purposes.

News of Phillips’s holiday trip to the Caribbean — despite the COVID-19 pandemic and his own government’s advice to avoid non-essential travel — has left many questioning how it came about in the first place and sparked calls for his resignation.

On Wednesday, Phillips’s office also told CBC News that the minister had taken a trip to Switzerland in August.

Ford spoke publicly on the issue for the first time yesterday at Trillium Health in Mississauga, Ont., where staff are preparing to distribute Moderna COVID-19 vaccines to Peel Public Health.

“I can tell you I’m very upset. I’m very frustrated with the situation. I stand out here every single day and tell people to stay at home.”