The Ontario government has announced a provincial stay-at-home order and new restrictions, as new COVID-19 modelling revealed Tuesday shows the health-care system is on the verge of being overwhelmed.

The province says it is issuing the stay-at-home order effective Thursday at 12:01 a.m., which will require everyone to remain at home with exceptions for essential purposes, like going to the grocery store or pharmacy, accessing health care services, for exercise or for essential work.

“Our province is in crisis,” Premier Doug Ford said.

The province says it is enacting the following measures:

“Community transmission is widespread. It’s in our hospitals, it’s in our long-term care homes, and it’s in our workplaces,” Health Minister Christine Elliott said Tuesday.

The province also announced Tuesday that schools in these public health units will not return to in-person instruction until Feb. 10:

“Schools in hotspots may not resume,” Elliott said.

If Ontarians don’t significantly reduce their contact with others during the COVID-19 pandemic, the province’s health system will become overwhelmed and deaths will exceed first-wave totals before a vaccine has time to take effect, according to new modelling also released Tuesday.

“We’re at a dangerous point,” said Dr. Adalsteinn Brown, co-chair of the Ontario COVID-19 Science Advisory Table, at a morning briefing in Toronto.

There are now cases of COVID-19 in every region of Ontario, Brown said, and the province’s hospitals are facing a potentially deadly influx of patients.

“The growth of the pandemic is particularly acute right now,” he added, noting that increases in new daily cases is above seven per cent “on our worst days,” well into worst-case scenario territory for the outlook of the illness in the province.

The revised modelling suggests that despite restrictions put in place last month, mobility and contacts between people have not decreased in Ontario. Survey data shows a majority of people are trying to limit the spread of the virus by following health advice, but case numbers will not go down until more people follow that example, Brown said.

And despite repeated assertions from provincial officials and the premier alike that Ontario was building an “iron ring” around its long-term care homes to protect seniors, the figures released Tuesday also show that almost 40 per cent of the province’s long-term care homes now have active outbreaks of COVID-19.

The province’s forecasts now suggest there will actually be more deaths in long-term care in the pandemic’s second wave compared to the first. Since Jan. 1, 2021, 198 long-term care residents and two staffers have died.

Modellers also warned that patients with COVID-19 now occupy more than 400 ICU beds in Ontario, leading to surgeries and other procedures to be delayed or cancelled, which will lead to “real consequences for health.”

Brown said that currently, about one quarter of Ontario’s hospitals have no ICU capacity left, while another quarter have only one or two beds available at any given time. The hospitals with no or very limited ICU capacity are spread out throughout the province, he added.

“This is no longer an issue of one or two regions,” Brown continued.

Projections now show there could be about 500 COVID-19 patients in intensive care by mid-January and potentially more than 1,000 by February under more severe scenarios.

Moreover, total admissions of patients with COVID-19 to hospitals have climbed 72.2 per cent in the last four weeks.

If current hospitalization trends continue unabated, health-care providers will be forced to make choices that “no doctor ever wants to make,” Brown said.

“There will be choices about who will get the care they need and who will not.” 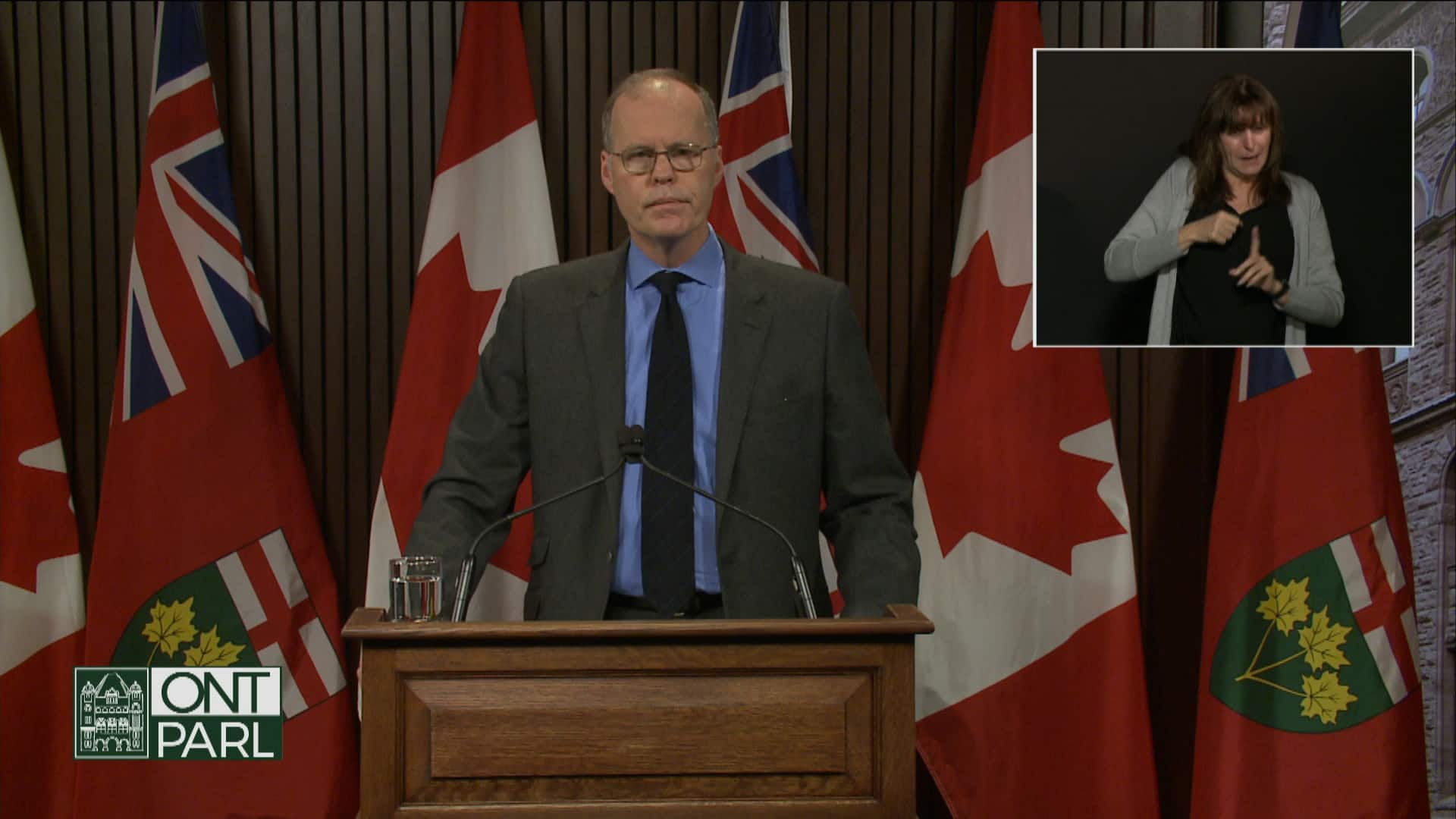 Public health experts are also warning that a new, more easily transmissible variant of the virus first identified in the U.K. could begin spreading rapidly in the province, considerably extending the period of time it will take for case counts to drop significantly.

Eight more people infected with the U.K. variant of the coronavirus in Ontario were identified yesterday. A total of 14 instances of the variant have been identified, but “it’s very likely that we have more that we’re not aware of,” said Dr. Barbara Yaffe, the province’s associate chief medical officer of health, at the briefing.

Three of the cases reported today currently have no known links to travel, suggesting community spread could already be happening. In a worst-case scenario in which the variant is spreading uncontrolled, models show Ontario could see up to 20,000 new cases each day by mid-February.

“We are in a serious situation, so we need more serious measures put in place,” she said.

Asked if Ontario’s immunization campaign could meaningfully slow transmission of the novel coronavirus, Yaffe said that it will take “many months” to reach herd immunity, which requires about 60 to 70 per cent of the population to be vaccinated.

“The vaccination program is going as quickly as it can,” she added.

Ford met with his cabinet last night and again this morning to discuss various proposals for further restrictions.

According to sources with knowledge of the government’s deliberations, public health experts recommended the following measures to Ford’s cabinet for consideration:

Both Brown and Yaffe said today that any plan to effectually slow the spread of COVID-19 in the province will require social supports for essential workers who need to take time off work, so that “nobody has to choose between getting a test and putting food on the table.”

Ford has thus far rejected calls for up to 10 paid sick days for workers in Ontario.

The province reported another 2,903 cases of COVID-19 and 41 more deaths of people with the illness today.

Other public health units that saw double-digit increases in cases were:

The seven-day average of new daily cases fell slightly to 3,523.

There are now 30,141 confirmed, active cases of COVID-19 provincewide.

They come as Ontario’s network of labs processed 44,802 test samples for the virus and reported a test positivity rate of 7.8 per cent.

The province says another 11,448 doses of vaccines were administered yesterday. A total of 133,553 shots have now been given out in Ontario.

Meanwhile, the number of COVID-19 patients in hospital increased by 138, up to 1,701 — a new pandemic high in the province. Of those, 385 are being treated in intensive care and 262 require the use of a ventilator to breathe.

The 41 additional deaths push the official toll to 5,053.

Here’s the latest provincial modelling on the spread of COVID-19 in Ontario:

B.C. premier promises to come down ‘like a ton of bricks’ on COVID-19 rule-breakers