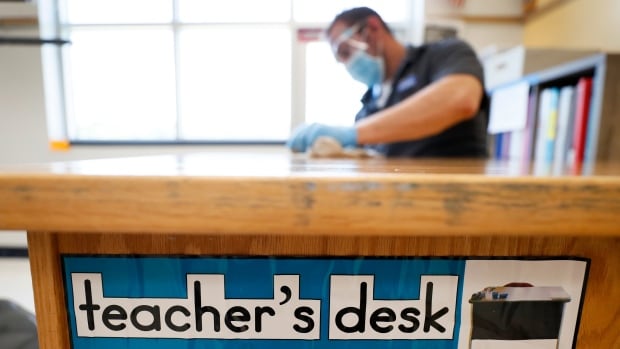 The provincial government says it is extending online learning for elementary students in southern Ontario until Jan. 25.

That aligns with the date secondary students signed up for in-person learning in those regions are scheduled to return to class.

Elementary students and secondary students in the seven northern Ontario public health unit regions will proceed with returning to in-person learning on Jan. 11, the province said in a news release.

“With the public health trends where they are across the province, our priority remains keeping students, teachers, school staff, and all Ontarians safe,” Premier Doug Ford said in a statement.

“We have to get the numbers down and today’s measures will help us continue to stop the spread of this deadly virus.”

Many students were set to head back to class earlier in the month amid record-high COVID-19 numbers. Ford said earlier Thursday that one in five kids under the age of 13 in Ontario who are being tested are now positive for COVID-19.

“That’s not mentioning all the other kids that haven’t been tested that might have a runny nose or a cough,” Ford said.

Dr. David Williams, Ontario’s chief medical officer of health, said Thursday that he made this recommendation with “much reluctance.

“I know this is a tough one. It’s tough for everybody,” he said.

But, Williams added, medical officers of health in the province have said this decision would be a better move instead of opening and closing schools back and forth.

“We want the schools open, and we want them to stay open,” Williams said, who noted schools were able to remain open all fall even though many — about 20 per cent — had a student or teacher with a confirmed COVID-19 case.

Ford said that before the holidays, Ontario was seeing positivity rates of around three per cent.

“Now, the information I received as of late yesterday afternoon, that has jumped [by] 116 per cent,” he said. Data shared by the province Thursday shows that from Dec. 27 to Jan. 2, the positivity rate increase in the age 4 to 11 age bracket was 116.7 per cent.

Some regions already announced schools will close, before the government said anything about the entire province.

Windsor-Essex’s top doctor says he plans to keep schools closed for a couple more weeks, even if the province doesn’t. Officials also say schools in Guelph and area will be closed for in-person learning until at least Jan. 24.