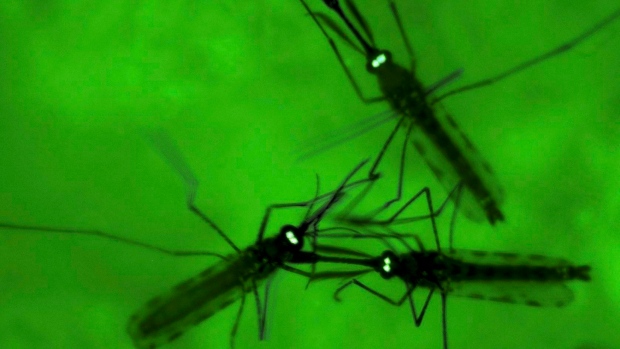 MONTREAL — A mosquito net coated with a new insecticide that makes the insects unable to move or fly has reduced cases of malaria in children by about 40 per cent, according to a new study conducted in Tanzania involving Canadian researchers.

In randomized trials with over 4,500 children aged six months to 14 years, mosquito nets coated with the new insecticide chlorfenapyr and with pyrethroids — traditional chemicals that kill insects — reduced the prevalence of malaria by 43 per cent in the first year and 37 per cent in the second. Traditional mosquito nets are only coated with pyrethroids.

The double-coated netting also reduced clinical episodes of malaria by 44 per cent over the two-year study period.

“By testing out new types of dual-insecticide treated nets, we were able to see if any of these new nets were effective at controlling malaria in areas with resistant mosquitoes,” said Dr. Manisha Kulkarni, an associate professor in the school of epidemiology and public health at the University of Ottawa.

“And what we did find is that a new type of net that has two insecticides ΓÇª (was) very successful at reducing malaria infection in children in areas with insecticide resistance in the malaria mosquito population.”

Chlorfenapyr is the first new class of insecticide approved to fight malaria in 40 years.

Mosquito nets covered with insecticide have contributed greatly to reducing the impact of malaria in sub-Saharan Africa for the past decade. But there’s been a slowdown or reversal of that trend more recently, particularly because the Anopheles mosquitoes responsible for the spread of malaria have become increasingly resistant to the pyrethroid insecticides.

Pyrethroids, which were developed in the 1980s, paralyze mosquitoes by targeting their nervous system. Chlorfenapyr, however, triggers wing muscle cramps, essentially grounding mosquitoes and eventually killing them.

“So, it’s a very different mechanism, which means very importantly that there’s unlikely to be any type of cross-resistance to this new class of insecticides,” said Kulkarni, whose ecological models of carrier species were used to develop the research protocol and to randomize the trials.

“So, these new types of nets are likely to work for a very long time,” she said.

The new nets are more expensive than the old ones, but the researchers calculate that the reduction in costs for the health system that will result from their use will make the extra cost well worth it.

While the new netting could provide a big boost to the malaria fight in sub-Saharan Africa, further research is needed to determine whether the nets can be produced on a larger scale and to develop strategies to reduce the insects’ resistance to the new insecticide and keep the nets effective long-term.

The nets will be tested in Benin to study their effectiveness in a different context, which could ultimately lead to their recommendation by the World Health Organization.

In addition to the University of Ottawa, the study was carried out by the London School of Hygiene and Tropical Medicine, the National Institute for Medical Research and Kilimanjaro Christian Medical University College, Tanzania.

The findings were published in the medical journal The Lancet.

This report by The Canadian Press was first published March 24, 2022.