The Canadian military is preparing for possible deployment of troops in the Prairie provinces, potentially as early as Saturday in Alberta, to assist with their responses to the COVID-19 pandemic, CBC News has learned.

All of the army divisions and joint task forces across the country were asked earlier this fall to check how many part-time soldiers would be available for duty so as to have 300 reserve soldiers in each area, a senior defence source said.

Late last week, the military expanded the call in anticipation of troops helping out with vaccine distribution, although no numbers have yet been attached to the new round, the source said.

There has been a special focus on calling up reservists in Alberta, Saskatchewan and Manitoba in case there is a call for assistance from those provinces, which now have among the worst COVID-19 infection rates in Canada.

Provincial requests for pandemic assistance from the military must be routed through the office of Public Safety Minister Bill Blair. A spokesperson for Blair on Monday said he has not received a request for help from the Alberta government, but did not respond to a follow-up question about any such requests from Saskatchewan or Manitoba.

A spokesperson for Alberta Health Minister Tyler Shandro said the provincial government has made no request for military assistance and is unaware of any such planning.

The military is calling out reservists now because it anticipates it may have difficulty finding enough part-time soldiers to staff long-term care facilities and perform other pandemic-related missions, said the defence source, who spoke on condition of confidentiality.

A National Defence spokesperson did not respond to an interview request from CBC News.

Last spring, the military mobilized 8,000 reservists as part of its coronavirus response, known as Operation Laser. They were part of a 25,000-strong task force of soldiers, sailors and aircrew who were prepared to respond to requests for help, including working at long-term care facilities.

CBC News has learned members of the 41 Canadian Brigade Group, Alberta’s army reserve, have been ordered to complete their pandemic-response training by Saturday, although there is no indication if, or when, the soldiers will be deployed, or how many will be deployed.

“We have been told that we need to be prepared for [an order] to come in at any moment,” said a reservist who spoke on condition of confidentiality.

“The one thing that really kind of struck myself and a lot of other troops is how insistent they were about it and the timelines.”

It is not known whether active service members are also being trained for mobilization.

The Ottawa military source said once reservists have been signed up, they will be tested for COVID-19 and go into a two-week quarantine to ensure they pose no infection threat.

‘No hard plan’ yet for deployment: source

The training for the Alberta reservists includes instruction on everything from how to don personal protective equipment to how to interact with dying patients.

Two Alberta reservists told CBC News the order to complete the training by Dec. 12 came down suddenly in late November, and their understanding is that troops could subsequently be deployed any time.

“It is an option that they are looking at in case [things] get truly bad, but there is no hard plan yet,” said one of the reservists, who also spoke on condition of confidentiality.

The number of Alberta continuing care facilities with COVID-19 outbreaks of two or more cases has more than tripled in the past few weeks. So far, 63 per cent of the province’s 631 deaths have been in long-term care facilities or supportive/home living sites. 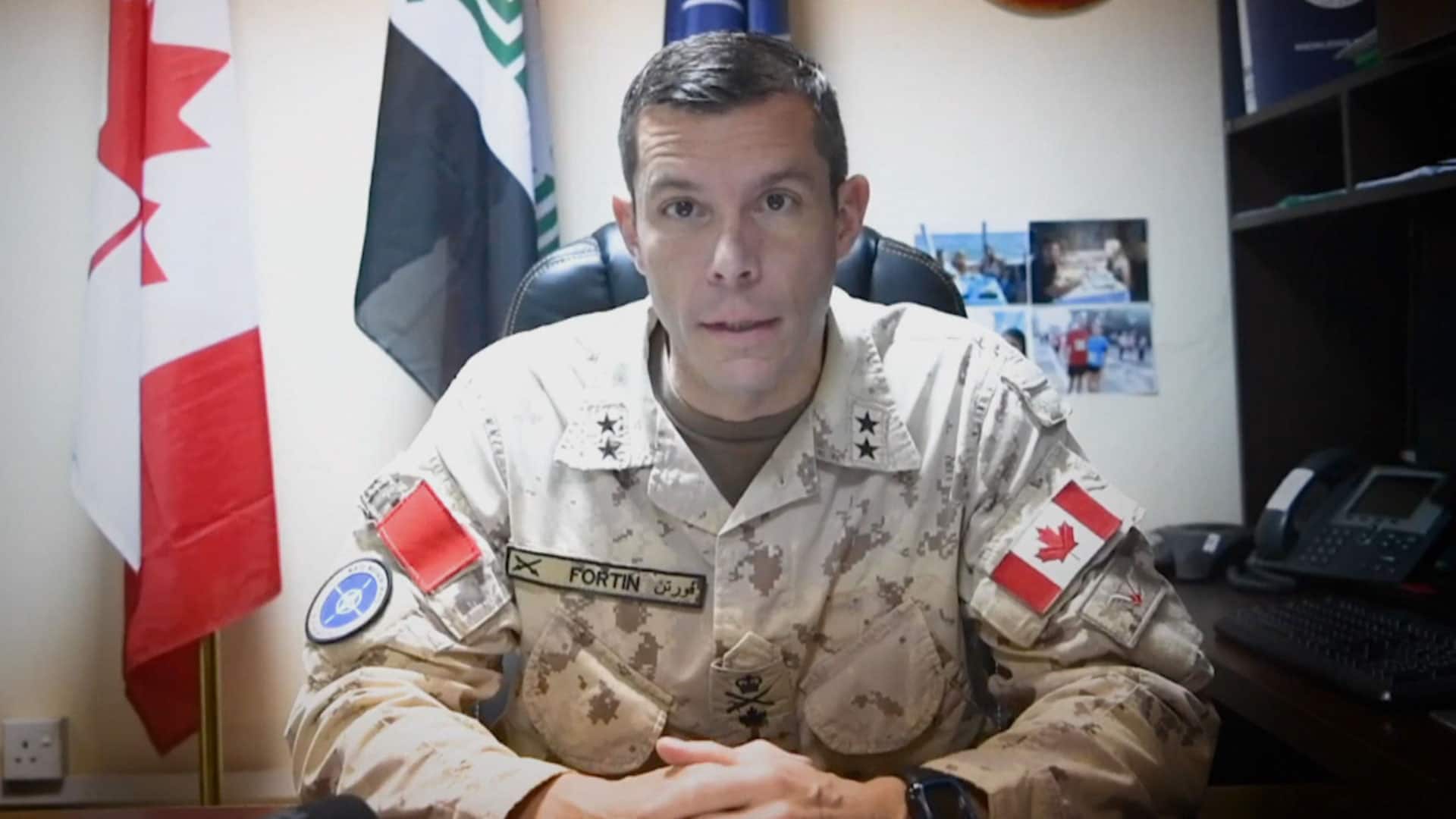 The Canadian Forces general in charge of planning and logistics for Canada’s vaccine rollout was announced Friday. But it raises questions about why military officers are needed at all. 2:09

Alberta continues to shatter its COVID-19 case records, recording a new high of 1,879 new cases on Saturday. On Friday, Chief Medical Officer of Health Dr. Deena Hinshaw said the province had reached a “grim milestone” as the positivity rate reached 10.5 per cent.

“I think that clearly the military, looking at the statistics and the numbers from Alberta, realize that within the next two-to-four weeks the situation is going to be very much a crisis in Alberta, and particularly in the long-term care homes,” Gibney said.

“The military recognizes something that the provincial government doesn’t — or maybe they recognize it, but they are not ready to actually admit that yet.”

The revelation that military reservists across the province are preparing to assist with the province’s pandemic response comes less than a week after Kenney, in a Facebook Live video he later posted on Twitter, accused the media of torquing pandemic coverage.

“I do regret that in so much of the COVID coverage and debate, there has been, pretty consistently, a kind of drive towards hysteria,” Kenney said.

“We need to take this very, very seriously — all of us. And Lord knows the government of Alberta is. At the same time, we should not allow voices of panic and hysteria to drive people into a sense of despair.”

“Keep calm and carry on,” Kenney said, referencing a motivational phrase of the British government during the Second World War.

On Thursday, CBC News revealed that the Alberta government has been planning field hospitals in Edmonton and Calgary, at large university sports facilities, to treat 750 COVID-19 patients.

A draft plan, dated Nov. 28, said the greatest challenge to getting the field hospitals operational would be staffing and that, “further exploration of staffing options (including military) is in progress.”

In the spring, Canadian troops were deployed to long-term care homes in Ontario and Quebec to aid facilities overrun by COVID-19 outbreaks. The mission cost taxpayers about $53 million. 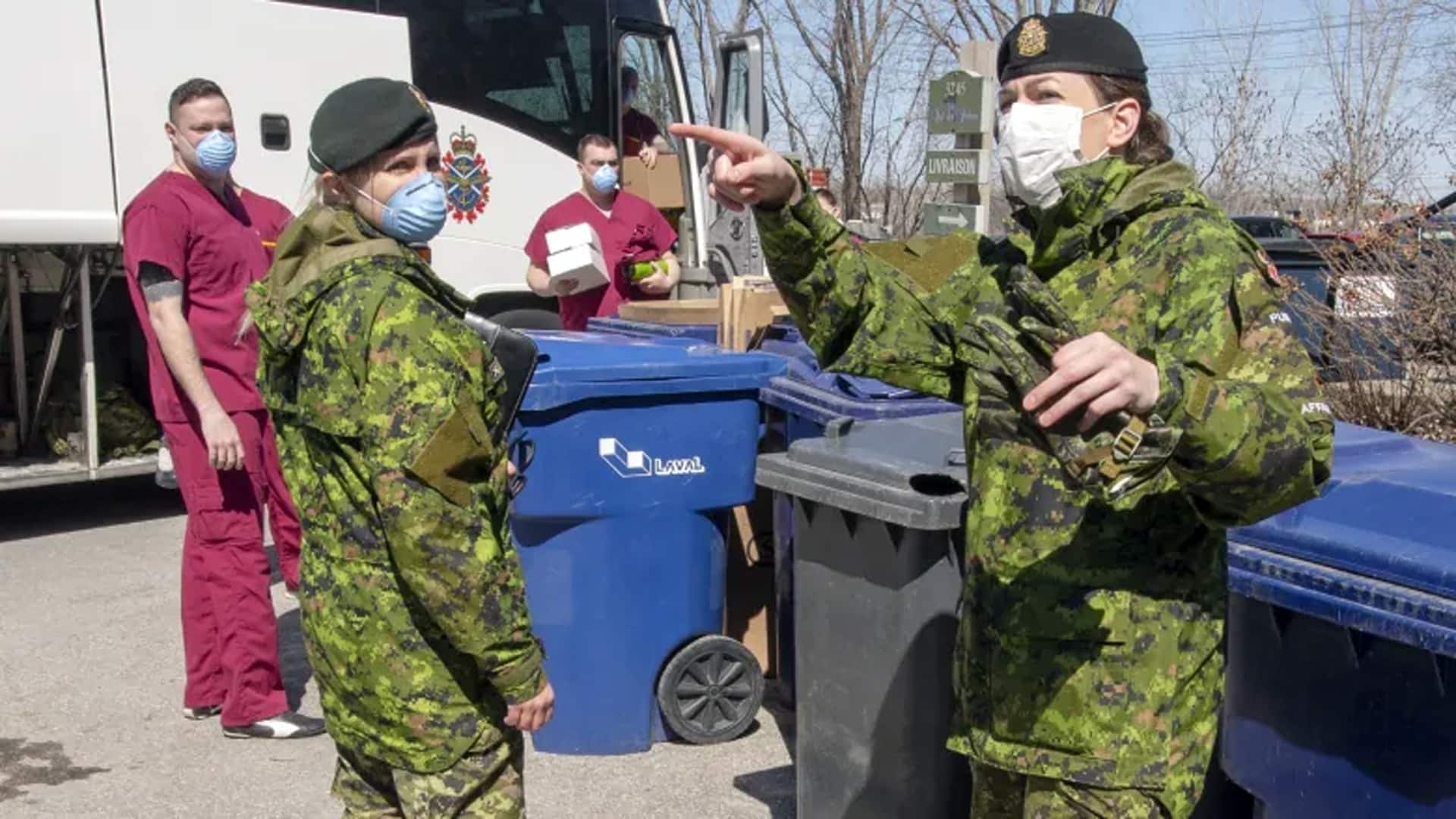 The military mission to long-term care homes hit by COVID-19 in Ontario and Quebec cost the federal government approximately $53 million, according to figures obtained by CBC News from the Department of National Defence. Senior military officers told a House of Commons committee on Monday that a number of lessons were learned from the deployment, lessons that will come in handy should further missions be necessary during the second wave. 2:34

“Because we are non-health-care practitioners, we would be helping with supportive care,” one of the reservists said last week. “So feeding, moving patients, assisting patients with daily activities.”

The reservist added that “one thing that really stood out to me was basically how they implied that we are going to be dealing with bodies and people at end of life.”

Soldiers trained to deal with end of life, bodies

A slide titled “Palliative Care” says, “Caring for the body of the deceased is something that we may experience during Op LASER. It is an occasion to pay our last respects to the person.

“The current circumstances may require us to place their corpse in a body bag and/or vehicle,” it said, emphasizing the need to do so in a respectful way.

Another slide warned soldiers that they may suffer what is referred to as a “moral injury.”

“A moral injury is harm caused by ‘perpetrating, failing to prevent, witnessing, or learning about actions that violate deeply held moral beliefs and expectation,'” it said.

“Because of COVID-19, many people will die earlier than they would have otherwise, and with fewer resources than would normally be available to them. We may sometimes witness situations that seem ‘inhuman’ to us.

“This injustice may cause us to feel powerless and hurt.”

The slide encouraged soldiers to seek support if needed.

“Most of us probably didn’t picture ourselves serving in a long-term care facility when we joined, but it is an honour to be able to assist our fellow Canadians in their time of need,” another slide said.

“One of the CAF principles is ‘respect the dignity of all persons,'” it continued. “Long-term care facility residents currently need our support to allow them to continue living in conditions that respect their dignity.

“Although this may pose a risk to ourselves, there is also another CAF principle by which we serve: ‘Serve Canada before self,’ which reminds us that this is our duty.”