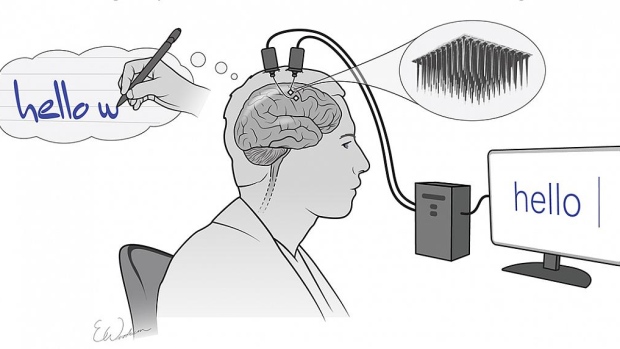 TORONTO — Scientists have developed an interface that will allow people with spinal cord injuries and neurological disorders to communicate by using the brain signals associated with handwriting.

Scientists have developed a brain-computer interface (BCI) to help people who are paralyzed with written communication, by tracking the brain’s signals during handwriting to see how the brain differentiates between letters.

“The way the system works is by recording activity from about 100 up to 200 neurons, or brain cells, all simultaneously,” says Jaimie Henderson, senior author of the BCI study and co-director of the Neural Prosthetics Translational Laboratory at Stanford University.

In a study published Wednesday in the journal Nature, a participant, who is paralyzed from the neck down due to a spinal cord injury, was asked by researchers to attempt to write out lowercase letters and punctuation.

Through surgically implanted electrodes in the brain, researchers tracked the brain’s signals for movement as the participant tried to write.

“When we ask a participant to write a letter, for example, an ‘A,’ he moves his hand in a particular way, or is attempting to move his hand — he is paralyzed so he can’t actually move,” says Henderson.

“But the activity of his brain is the same or similar to what it would be if he was actually moving his limb. We have him write the letter a number of times and we look at the brain activity for each of those instances and we use that as representation of an ‘A’ in the brain.”

Henderson says that since brain activity between letters is unique, algorithms can successfully identify different letters to produce words and sentences.

“It’s exactly like if you were handwriting, except what he’s doing is imagining handwriting one on top of another, rather than writing on an endless piece of paper,” says Henderson.

Using this BCI system, the participant was able to produce around 90 characters per minute.

“We are very inspired by people who have lost the ability to communicate,” Henderson says.

Henderson says that the team’s next step is to develop a brain-to-text system that will allow people who have lost the ability to speak to communicate by tracking brain signals associated with speech.