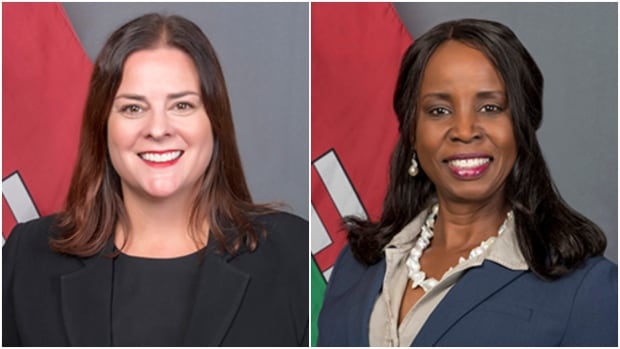 Premier Brian Pallister has expanded his cabinet and split the health minister’s job in two as the province battles a pandemic that has sunk the popularity of his government.

Pallister called it “a hopeful day” at a Tuesday afternoon news conference about the cabinet shuffle.

“I know the stories of these capable people.… The triumphs in their lives have not come without significant challenges,” he said.

“It’s a Manitoba shuffle, in a way, in the sense that we are a diverse province,” Pallister said, pointing out members of the new cabinet or their families come from different countries, including Iceland, Ukraine and Jamaica.

Heather Stefanson and Audrey Gordon now share the health portfolio, which was previously handled by Cameron Friesen, who now leads the justice department, the premier announced at a swearing-in ceremony on Tuesday morning.

Stefanson, the former families minister, takes the lead on the COVID-19 pandemic as the minister of health and seniors.

The government has faced sharp criticism over its handling of the pandemic.

“Minister Stefanson has performed admirably in every assignment I’ve given her,” Pallister said.

Pallister dismissed the suggestion that taking the health portfolio away from Friesen was a signal that he had done a poor job.

“I’ve got a tremendous amount of respect for Cam Friesen or he wouldn’t be our new attorney general and justice minister,” Pallister said.

The 2½ years Friesen held the position is longer than many other health ministers have served in Canada, and no one could have foreseen COVID-19 when Friesen took the job, the premier said.

“It doesn’t really matter, frankly. It’s what the premier wants,” Pallister said when he was asked whether Friesen wanted out of the job.

In addition to Gordon, Pallister added two other new members to his inner circle — Interlake-Gimli MLA Derek Johnson and Lac du Bonnet MLA Wayne Ewasko — for a total of 18 cabinet ministers, six of them women. No ministers were removed from cabinet.

While in opposition, Pallister criticized the size of the NDP’s cabinet, which hit 19 members. He’s progressively added more members to his inner circle since he was elected in 2016 and selected 12 cabinet ministers. The new cabinet has 17 ministers.

Among the major changes in the cabinet overhaul, Cliff Cullen becomes the education minister, moving from the justice portfolio that now belongs to Friesen.

Cullen replaces Kelvin Goertzen, who now heads the Department of Legislative and Public Affairs. He also is deputy premier, a role Stefanson once held. Pallister described Cullen as a “strong supporter of the public school system” whose experience as justice minister made him qualified for the job.

Rochelle Squires leads the Families Department. She retains her role as the minister responsible for francophone affairs. Squires is a former teenage mother who received social assistance, and is now leading the department in charge of employment and income assistance, Pallister said.

Johnson, a councillor in the rural municipality of St. Laurent from 2010-14, takes responsibility for the municipal relations file from Squires.

All other ministers are keeping their portfolios:

This is the first cabinet shuffle since October 2019.

The physically distanced ceremony at the Manitoba Legislature Tuesday morning had the new ministers enter in small groups to be sworn in and then leave to allow a new group in. It was live streamed on YouTube.

Pallister is holding a news conference at 1 p.m., while new ministers will speak to reporters at 2:30 p.m.

The premier has been suffering his lowest approval ratings since he took office. That has been attributed to the pandemic’s second wave, with COVID-19 cases spiking and delays for test results and contact tracing stretching for days.

A shuffling in the health department was expected, after Pallister said in a December interview with The Canadian Press that he was thinking about appointing a second health minister to ease the workload during the pandemic.

Former health minister Friesen was absent from news conferences for more than a month when the province had some of its worst COVID-19 case counts and double-digit deaths almost every day. He participated in a briefing a few days before Christmas.

Even without a pandemic, the department is the government’s largest, Pallister said.

Some other provinces also have two health ministers. For example, in Ontario, one is dedicated to long-term care, while in British Columbia, one is focused on mental health and addictions.

‘You don’t want to fall into that three per cent category’: Toronto ICU doctor reflects on year of treating COVID-19 patients

‘Check it twice’: Daughter baffled after her mother receives Moderna and Pfizer vaccines

Should governments name workplaces that have COVID-19 outbreaks? The pros and cons according to experts