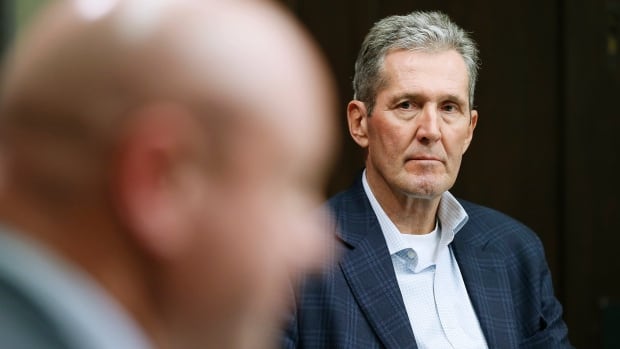 Manitoba has the highest infection rate in Canada and hospitals in the province continue to be overwhelmed.

“Our health-care system is under great strain,” Roussin said.

A public health order forced schools in Winnipeg, Brandon and elsewhere to move to remote learning over two weeks ago. That order was set to expire on Sunday.

Roussin said the hope is still to get students back in school next month, before the end of the school year.

The province is also extending existing public health orders for another two weeks. That means no indoor or outdoor gatherings with people outside your household. The same applies to playgrounds, golf courses, parks, sports fields and campgrounds.

Non-essential retail businesses will be allowed to stay open at 10 per cent capacity or 100 occupants, whichever is lower.

The revised orders come with new powers for public health to shut down businesses with multiple cases among staff, Roussin said.

Employers are also ordered to allow employees to work from home wherever possible.

Malls, which remain open, will be allowed to force people out who appear to be using the space to gather, Roussin said.

“These malls are not allowed to tolerate gathering within them,” he said.

Faith-based gatherings are still not allowed.

Read the previous story below:

Manitoba’s premier and chief public health officer will deliver an update today about COVID-19 public health orders in the province, where they’re also expected to say whether remote learning will continue.

CBC Manitoba is live streaming the announcement here and on CBC Gem, Facebook and Twitter at 12:30 p.m. CT.

Cullen is expected to make an announcement of his own at 3 p.m. about funding for the 2021-22 school year.

The province imposed school closures for kindergarten to Grade 12 in Winnipeg, Brandon and some schools outside those cities just over two weeks ago. The order forcing schools to shift to remote learning is set to expire Sunday.

Manitoba has been averaging over 400 new cases a day for over two weeks and recently became the jurisdiction with the highest infection rate of any province or U.S. state. The number of infections per 100,000 people in the past seven days is currently 221 — about three times higher than the next closest province, Alberta.

Hospitals are under siege and over two dozen Manitoba COVID-19 patients have been sent out of the province, primarily to Ontario, to receive critical care as intensive care units in the province maxed out.

One patient who was in the process of being sent out of province suffered a medical emergency before takeoff and died the next day in Manitoba.

Thousands of surgeries have been postponed as doctors and nurses typically assigned to surgery or medical units have been redeployed to keep up with the crush of COVID-19 patients.

This week, a group of doctors raised alarms about the downstream effects of suspending surgeries, saying at least six cardiac patients have died recently waiting for care. Manitoba was still chipping away at a surgery backlog from the second wave of the pandemic when the third wave hit.

Pallister pleaded for help from the federal government less than a week ago. Manitoba has been promised at least a dozen ICU nurses by the federal government, along with dozens of contact tracers and a few other experts from various federal agencies. Some of those resources were expected in Manitoba this week.

Meanwhile, officials continue to urge Manitobans to get vaccinated as soon as possible to help stem the third wave.

So far, 60 per cent of Manitobans have received at least one COVID-19 vaccine dose. Everyone 12 and up is now eligible for a first dose, and second dose appointments opened for some people late last week.