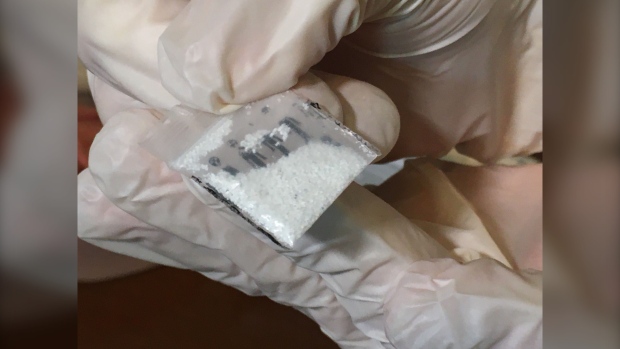 WINNIPEG — The COVID-19 pandemic is affecting the type of illicit drugs that are showing up on Winnipeg streets and is leading to an uptick in opioid-related deaths, an addiction and mental health advocate warns.

Marion Willis, founder of Morberg House, is warning Winnipeggers that a new synthetic drug known as ‘purple down’ has become the new drug of choice because the meth supply has dried up.

“The purple down is a mix of fentanyl, carfentanyl, sometimes heroin, often cut with benzodiazepines,” said Willis.

She said purple down can have different variations and it can have other names such as ‘pink dizzy’ and ‘blue down’.

Ryan McGreggor has been living at Morberg House and receiving addiction treatment. He said he never used purple down, but it has impacted people close to him.

“I have multiple friends who have overdosed from it, and it’s sad to see because they’re such young people and their lives are just gone because someone sold them the wrong drug. It’s playing Russian roulette with their life, that’s what they’re doing,” said McGreggor.

The Canadian Institute of Health Information says there was an 82 per cent increase in opioid deaths in the country during the first six months of the pandemic.

Willis said the increase in overdoses in Winnipeg over the last 15 months can be attributed to purple down.

Shohan Illsley, the executive director of the Manitoba Harm Reduction Network said COVID-19 has kept people isolated, which means they are taking drugs alone, which can lead to more overdoses.

“So we want some safe consumption services, of course, that would assist with things like this. Expansion of harm reduction programming for folks who do have some dependency or struggle with their substances,” said Illsley.

McGreggor said he is moving out of Morberg House soon and plans to better his life.

“I’m going to end up finishing my Grade 12, I’m almost finished. Hopefully down the line I stay sober and get a job, get a career and get the life I want for my son,” said McGreggor.