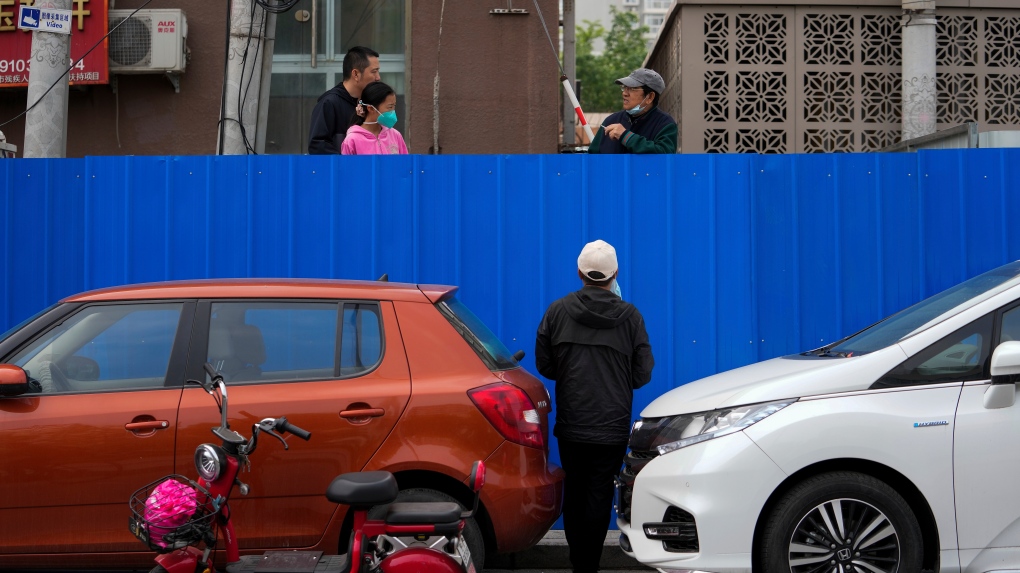 Several districts in Shanghai put up metal barriers last weekend as part of the city’s battle against a COVID-19 outbreak, in a move that drew protests and anger from some residents.

Workers in white head-to-toe protective gear erected mesh wire fences and metal sheets to block off roads, residential communities and even the entrances of some apartment buildings. A majority of the city’s 25 million residents had already been prevented from leaving their homes during a month-long lockdown, though some neighborhoods have since opened up.

The barriers are deployed to ensure control over movement and often leave only a small entrance that can be easily guarded.

IS THE USE OF METAL FENCING OR BARRIERS NEW?

The barriers are new to Shanghai but have been deployed throughout the pandemic in other cities across China. For example, early in 2020, some neighborhood committees — the lowest rung of local government — erected metal sheets and fences in parts of Beijing to control access points to homes. Wuhan, where the first cases of COVID-19 were reported in December 2019, also erected metal barriers across the city.

How they have been deployed varies. Sometimes the government sets up fencing around entire neighborhood blocks, leaving just one or two entrances. In other cases, they build fences in front of individual residential complexes.

The fencing has been widely deployed in border regions as well, including in Suifenhe, a city in the northeast that borders Russia. The metal barriers there block off entire streets.

WHY DID PEOPLE PROTEST IN SHANGHAI?

Shanghai had not erected metal barriers on a wide scale during the past two years of the pandemic, priding itself on more targeted measures that did not rely on lockdowns. That changed in the latest outbreak, which is driven by the highly transmissible omicron BA.2 variant. Central authorities enforced a lockdown for the entire city that prevented people from putting even “one foot out the door,” according to a widely propagated slogan.

Many Shanghai residents were upset about barriers blocking the entrances to their apartment buildings and some angry citizens circulated videos online showing protests. In one video verified by the AP, residents leaving a building in Shanghai’s Xuhui district broke down a mesh fence barricade at the front entrance and went angrily looking for the security guard they believed to be responsible for putting it up.

Shanghai is using a tiered system in which neighborhoods are divided into three categories based on the risk of transmission. Those in the first category face the strictest COVID-19 controls and are the main target of the barriers.

However, some neighborhood officials in Shanghai put up barriers in areas that aren’t part of the strictest category. One resident called the police to protest the sealing off of roads near his apartment building, saying his residence wasn’t part of the first category. He and two other residents in his building complex tried to stop the workers from erecting the metal barriers, but they were stopped by a worker in the neighborhood committee. The police officer told the residents they had no right to leave the apartment, according to the man’s account, which he posted on WeChat.

“This deep, deep feeling of powerlessness. Who can tell me: Is there any hope for this place?” he wrote. He declined to be named.

WILL THEY BE TAKEN DOWN?

In some instances, residents have been successful in their protests.

At one apartment complex in Shanghai’s Putuo district, residents fiercely protested after the residential committee put a U-lock on the door to their building on April 16.

“It was very sudden, without any notice, and it wasn’t just the building. Every place was blocked off below. It blocked off any escape path,” said one Shanghai resident who asked to be identified only by her last name, Zhang. “If there was any accident or fire, everyone’s sure to die.”

Residents in the building called the police as well as the city’s hotline. The residential committee relented and put tape across the door instead, but warned residents that destruction of the tape would bring legal consequences, according to a notice the committee sent to residents that Zhang showed to the AP.

In Beijing, many barriers were removed after the city went without a major outbreak during the past two years. Now, however, residential complexes with positive cases are once again being barricaded.