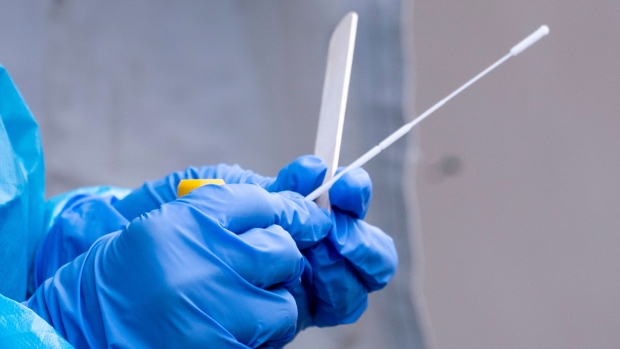 OTTAWA — Shortly after Health Canada approved the first rapid antigen test for COVID-19, the federal government said more than 8.5 million of them would arrive by the end of the year.

Abbott Rapid Diagnostics in Germany got the greenlight from Health Canada Tuesday to sell its Panbio antigen rapid test in Canada — the first antigen-based COVID-19 tool to get such approval.

“Antigen tests are expected to have a few advantages, including being easier to perform with limited training, and being able to be done at the point of care with generally more rapid results,” federal Health Minister Patty Hajdu said Tuesday at a briefing in Ottawa.

Antigens are molecules specific to a certain virus that sit outside the virus and trigger an immune response when the body detects them. The Panbio test looks for the COVID-19 specific antigen in samples taken of the back of the nose or throat.

Procurement Minister Anita Anand said Canada signed a contract with Abbott to get 8.5 million Panbio tests by the end of the year, and has an option for 12 million more in 2021. She said buying the second allotment will happen only if the government finds the tests have proven to be helpful in Canada.

All of the tests previously approved by Health Canada are polymerase chain reaction tests, or PCR, which search for the presence of the virus’s genetic material. Most of those tests have to be completed in a laboratory, after a sample is taken from a patient. Canada has approved three rapid versions that can be analyzed on site and don’t need a laboratory.

That includes the ID Now test from Abbott Diagnostics in the United States, which Health Canada approved last week. The federal government has a contract to buy 7.9 million of them. The first shipment is set to arrive next week and 2.5 million are expected by the end of December.

Health Canada will distribute the tests to the provinces and territories, based on an agreement to ensure equitable distribution that takes into account what provinces need.

Health Canada approved Cepheid’s GeneXpert last spring. It produces results in less than an hour and has been deployed in small numbers to remote northern communities in Manitoba, Quebec and Nunavut.

The BCube from Hyris was approved in September, and the company reports being in talks with Canadian buyers in both the public and private sectors. It produces a result in about 90 minutes.

Deputy chief public health officer Dr. Howard Njoo said the public health guidance for how antigen tests can be used in Canada is coming soon, but that in general, they are used to complement the existing lab tests, not replace them.

A work camp or a meat-packing plant where workers need to be regularly tested to prevent a massive outbreak, would be examples of where they could be used, said Njoo. Schools, long-term care facilities, and hospitals are other locations mentioned as potential locations for rapid tests to be deployed.

Those suggestions mimic the recommendations made by the World Health Organization for antigen tests in September. Early in the pandemic, the WHO warned antigen tests should not be used outside of research settings, but in September issued guidance for clinical use as well.

The WHO is also buying and distributing 120 million antigen rapid tests to low and middle-income countries, with the Panbio test among those it intends to buy.

Conservative health critic Michelle Rempel said Tuesday the Canadian government lacks a strategy to use the rapid tests to help ease the long waits for testing and disruptions to people’s lives.

It is not clear when the rapid tests will be put to use in Canada, only that the first ID Now tests are to arrive at a Canadian warehouse from the United States next week.

The ID Now tests came under some scrutiny in the United States over the weekend when it was revealed they were used at the White House to test staff almost daily, whether they had symptoms or not.

The White House is now the site of an outbreak of COVID-19 that has affected President Donald Trump, his wife Melania, and multiple members of his staff.

Dr. Supriya Sharma, the senior medical adviser to the deputy minister of health, said that in Canada, the tests are approved only for use on patients who are showing symptoms of COVID-19, and only within the first seven days after symptoms appear.

This report by The Canadian Press was first published Oct. 6, 2020.

Ontario reports 827 new COVID-19 cases, testing levels drop to about half of capacity

More than 80 per cent of hospitalized COVID-19 patients had vitamin D deficiency: study

New guidelines address rise in opioid use during pregnancy