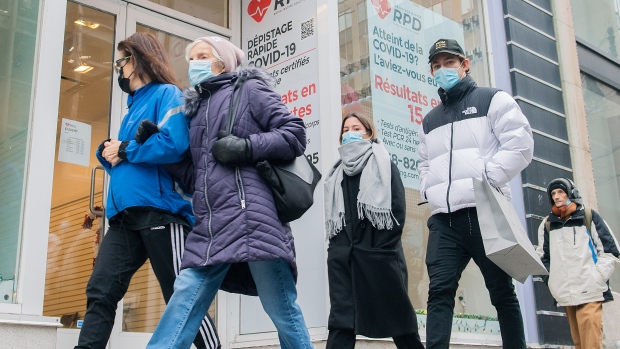 TORONTO — Canada will likely see a resurgence in COVID-19 infections going into the new year that could be further accelerated should the new Omicron variant replace Delta, new federal modelling suggests.

The current rise in new cases is primarily driven by Ontario and Quebec, with both provinces experiencing numbers not seen since spring. Should transmission rates increase by 15 per cent, or if Omicron takes hold under current levels of transmission, then Canada could see cases skyrocket to record levels above 10,000 cases before January, modelling charts show.

Canada’s Rt number has been back above one for the last five weeks, indicating that the epidemic is in a growth pattern.

The Delta variant remains the dominant strain in Canada and around the world, but the spread of Omicron is increasing, according to federal health officials. There are currently approximately 80 documented cases of Omicron in Canada.

“The Omicron variant of concern is a cruel reminder that a global epidemiological situation can change quickly. We all need to be prepared for that,” said Minister of Health Jean-Yves Duclos in a press conference on Friday.

While researchers are still trying to determine the exact transmissibility and severity of the Omicron variant, preliminary data indicates that it has the potential to spread faster than the highly transmissible Delta variant. It is still unknown whether the Omicron variant poses a higher or lower risk of severe illness and death.

In South Africa, cases have climbed at a much faster rate with Omicron than they did in previous waves.

With 80 percent of the eligible population fully vaccinated, infection rates are highest among children under the age of 12, though outbreaks in schools and childcare settings remain small in size.

While existing vaccines are expected to provide protection against Omicron, scientists are still investigating the exact level of effectiveness. Officials continued to encourage vaccinating children aged five and up and boosters for those aged 18 and over, saying vaccines along with protective health measures could help control transmission.

The risk of being hospitalized remain significantly lower for those who are fully vaccinated individuals, officials said.