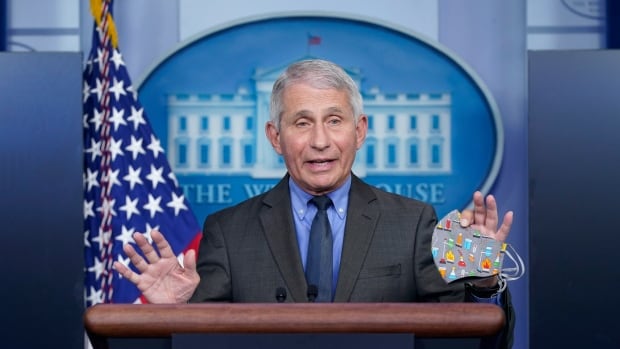 U.S. President Joe Biden’s chief medical adviser Dr. Anthony Fauci says Canadian health officials don’t appear to be doing anything wrong in their response to the global pandemic, despite rising caseloads in most parts of the country.

“What goes through my head when I look north is not that Canadians are doing anything wrong or making any big mistakes at all,” he told CBC News Network’s Power & Politics in an exclusive interview.

“What goes through my head is how extraordinarily difficult this virus has been globally.”

White House officials announced today that at least 100 million American adults have been fully vaccinated with a COVID-19 vaccine.

That news came on the heels of the Centres for Disease Control and Prevention outlining relaxed pandemic rules for fully vaccinated Americans, which permit them to forgo wearing a mask outdoors and dine in patios with members of different households.

The situation is very different in Canada. Alberta is introducing strict restrictions, including curfews in hot spots, while the Armed Forces is assisting hospitals in the Greater Toronto Area.

The Biden administration recently announced that it is ready to share 60 million AstraZeneca doses with countries around the world.

Earlier this year, the White House gave Canada a loan of 1.5 million doses of the AstraZeneca vaccine.

Fauci said the United States should be sharing its surplus doses with the rest of the world “as equitably as possible.”

“When you only have 60 million doses and you have so many countries that need it, one of the ways to try and get equity would be to give it to the COVAX organization and try to get to them to be distributed or in situations of dire need,” he said.

Asked if India should be prioritized for surplus doses, Fauci said the dire situation there calls for immediate action.

“I think certainly India would be considered as a very high priority given the desperate situation that they’re in right now,” he said.

India recorded 386,452 new cases recently and has now reported 18.7 million cases since the start of the pandemic.

With files from the Associated Press.