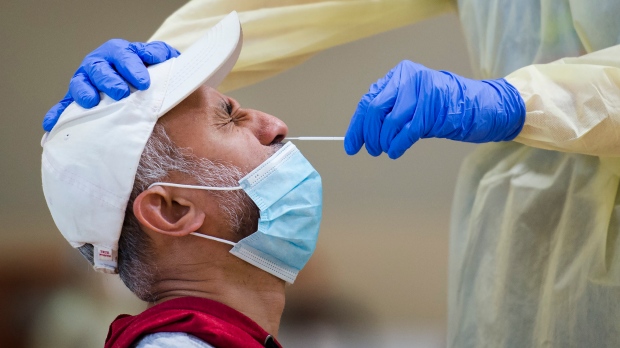 TORONTO — Polymerase chain reaction (PCR) tests are considered the best tool we have for determining whether a person has contracted the novel coronavirus.

They involve collecting a sample from a patient’s nose, throat or saliva and analyzing it at the molecular level for presence of SARS-CoV-2, the virus that causes COVID-19. Some PCR testing kits are able to turn around results rapidly, while others require processing in a laboratory – which means the subject often doesn’t get the results for a few days.

These tests are the backbone of COVID-19 testing in Canada and many other countries. As of Thursday, almost everyone flying into Canada is required to have proof of a negative result from a PCR test conducted within 72 hours of their departure time.

“If you have a positive test, there’s virtually zero likelihood that you’re actually negative,” Dr. Philippe Lagacé-Wiens, an assistant professor of medical microbiology at the University of Manitoba, told CTVNews.ca via telephone on Wednesday.

In the rare cases a false positive does occur, Lagacé-Wiens said, it is most often because of accidental contamination in the laboratory or another error in the testing process, not because of an issue with the test itself.

False negatives, however, are more common. According to PHAC, approximately 98 per cent of patients tested within two days of their exposure will still get a negative result from PCR tests. That number drops to 50 per cent over the first five days post-exposure, and 10 per cent after that until symptoms disappear.

“A single test at any given point, all it really tells you is ‘right now, at this very moment, you do not have enough virus in your nose to have a … positive test.'”

The latest research shows a growing consensus that SARS-CoV-2 is most detectable via PCR tests approximately one day before symptoms start to appear, and more difficult to detect the longer one waits past that point.

This is why public health experts recommend that anyone who thinks they may have been exposed to COVID-19 wait a few days before seeking out a test, because the odds of the test detecting the virus will improve significantly during that time.

Poor timing isn’t the only reason a test can result in a false negative. The BC Centre for Disease Control says it could also be that the sample that was collected was too small, or the virus never made it to the point of collection, attacking instead as a lower respiratory illness.

“The risk of false negative depends on two big factors, the first of which is how symptomatic the patient is and the second of which is really which body specimen you take the sample from,” Dr. Matthew Cheng, a microbiologist at the McGill University Health Centre (MUHC) in Montreal, told CTVNews.ca via telephone on Thursday.

The risk of a false negative result is strong enough that the MUHC does not allow health-care workers to return to frontline work unless they have tested negative multiple times.

“A single negative test wouldn’t give us the confidence to put those health-care workers back on the floor when there’s still a risk that they could be contagious,” Cheng said.

Not only are the tests fallible, they’re not all created equal. There is no one standard PCR test. Health Canada’s list of authorized COVID-19 tests includes nearly 100 different tests that use nucleic acid – PCR tests, in other words.

Tests that take a sample through deep inside the nose are typically considered more accurate than those that go through the throat, with saliva tests being the least reliable of the three, according to Public Health Ontario.

Each test approved for use in Canada is given a sensitivity value – a measurement of how likely it is that the test will detect SARS-CoV-2 in a subject who has COVID-19. The higher a test’s sensitivity, the less likely it is to produce false negative results.

Many of the approved tests are said to have sensitivity levels of 100 per cent, while others dip as low as 81 per cent – and some are still undergoing trials to determine their own sensitivity.

However, a test having a sensitivity level of 100 per cent does not mean that it will catch every case of COVID-19. The 100 per cent is not an absolute value; it’s meant to measure a test’s sensitivity relative to reverse transcription PCR tests – what Health Canada calls “the gold standard testing method.” A sensitivity rate of 100 per cent means only that a test will catch as many cases of COVID-19 as the best tests known to exist – and, as explained above, timing and other factors mean it will still provide many false negatives.

Because of this, experts caution that the true number of COVID-19 infections in Canada is likely well above what has been officially reported.

“The case number that’s reported in the media – no matter what province or country, it’s actually not a representation of the true number of infected individuals,” Cheng said.

“The government is [not] trying to hide information; it’s just that we’re unable to get a true, accurate number because of the risk of false negatives.”

Tests that have not been approved by regulatory bodies may have even greater rates of false results. The U.S. Food and Drug Administration warned earlier this week of potential danger with one test kit, urging anyone who tests negative with that test to take a separate second test to confirm that they do not have COVID-19.

Experts say the important thing for anyone to remember is that while a negative test likely means a patient does not have COVID-19, it is not a guarantee, and they should continue to behave as if they might be infectious.

“The problem is people don’t. They’ve got a little bit of a cold, they test negative and they conclude ‘I’m fine, I can go back to work even though I still have symptoms,'” Lagacé-Wiens said.

“That’s the danger, and I see it all the time – because people don’t understand the meaning of that negative test.”