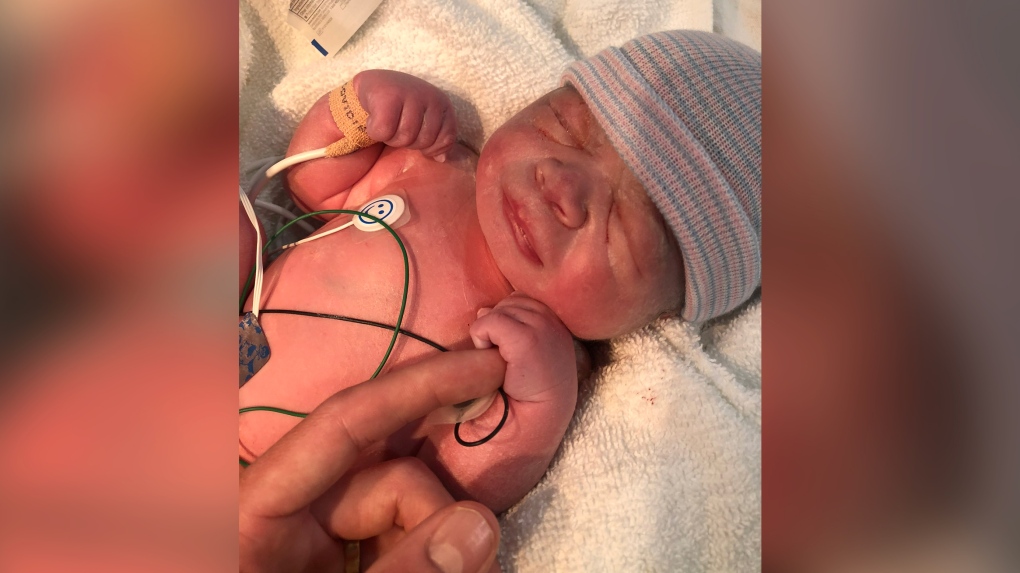 Three-year-old Alexis Tyler survives on Gerber Lil Crunchies cheese puffs and the chocolate flavor of a specialty nutritional formula called Neocate. Her mother hasn’t been able to buy that formula for her since March.

In the next few days, doctors will start the process of admitting Alexis to the hospital to surgically implant a tube into her stomach so her parents can feed her something else.

The baby formula shortage in the United States has meant major stress, inconvenience, and expense for millions of families, but for some children, the hunt for formula has led to the hospital when their families can’t consistently find the kind they need.

The problem doesn’t seem to be common. According to interviews with children’s hospitals around the nation, most infants and children—even those on specialty formulas—have been able to work with nutritionists to find acceptable substitutes. But some haven’t yet found something that works for them, or their families can’t find it consistently.

Alexis has autism spectrum disorder and refuses to eat any other foods. The formula provides all her nutrition.

“We’ve had to keep her on formula. She’s been on it her whole life,” says her mother, Nicole Tyler, who lives in Clinton, Massachusetts.

Alexis normally drinks three sippy cups of the Neocate formula a day. But with her stash of cans dwindling—her mom says she has just two left–Nicole has been more careful about giving it to her.

“If I could tell she’s in a mood, like ‘I don’t want to take this right now’ I just wouldn’t make one,” Nicole says. “I’ve been trying to ration it a little bit.”

Alexis was holding her own on the growth charts, but in the past few weeks, she’s lost three pounds, which is 10 percent of her body weight.

Alexis is working with therapists to try to expand the range of foods she’ll eat. But so far, she will just play with other foods with utensils. She won’t eat them.

“Probably half the day she’ll just sit with me and just want to lay down. She doesn’t really want to play,” says Nicole.

“She’s hungry all the time,” Nicole says. She doesn’t have as much energy as she used to.

Alexis’s doctors at UMass Memorial Medical Center have grown so concerned that they could admit her as soon as tomorrow to start the process of surgically implanting a tube into her stomach so her family can feed her.

“When we’re bypassing taste, it allows us to pick another option that’s available and similar to what she needs,” Nicole said.

Nicole says she is heartbroken that they have to take such a drastic step to help their daughter. She says they were trying to get by until the formula was back in stock.

“But at this point, there’s no date that it’s going to come back into stock. So I was left with no choice but to consider surgery because I have no other way to feed her.”

There’s no way to know exactly how many children have run out of formula options. No one is keeping track.

“I’m sure there are little stories like this going on all over the country,” said Dr. Jenifer Lightdale, the pediatric gastroenterologist who is treating Alexis.

In addition to children who need to be admitted to be fed, Lightdale says they are seeing desperate families come to the emergency room when they run out of formula and can’t find any more.

“I think most of us have been sort of outraged, I would say, and distressed,” she says. “It’s like a daily experience right now.”

“In terms of numbers, it’s hard to say but we certainly, you know, basically having a couple at least every day or two showing up,” she says.

Kathy Merrill, a nurse that works with Lightdale, says that even when their families are able switch to a different formula, that switch sometimes has consequences for kids with very specific dietary needs.

She says in about 25 percent of cases they’ve had to add medications to help with new symptoms caused by the change, such as acid reflux or constipation.

Some children haven’t been able to find anything else that works for them.

‘What times are we living in?’

Clover Wheatley was tiny when she was born, just 5 pounds. But now, nearly three months later, she’s had such a hard time feeding that she only weighs 7 pounds, when she should weigh closer to 10.

She has medical problems that have prevented her from breastfeeding. She was also born with allergies to dairy and soy.

Even when her mom eliminated those foods from her diet, Clover wasn’t doing well on her pumped breastmilk, “she just wasn’t tolerating it,” Savannah said.

“They wouldn’t send us home with any from the hospital because of the shortage,” Savannah said, and after a couple of days, when her family couldn’t find any, Clovers doctors tried to switch her to a different formula, called Nutramigen, but the baby couldn’t tolerate it.

So Savannah has been spending hours each day scrolling through every Facebook group for families seeking Neocate and the family has friends across the country looking for them. They’ve driven to drugstores 45 minutes away from their home, even after they’ve called first, just to be sure the store is really out.

“No stores sell it. It’s like impossible to find people who do sell it. They don’t have it in stock,” Savannah says.

For a while, they were able to buy it directly from Nutricia, the manufacturer, but the company has run out of stock, though a message on their website says it will be in stock soon.

Nutricia did not immediately respond to CNN’s telephone inquiry to find out more about their supply issues.

The family has just a few cans left. Clover was recently admitted to the hospital for the third time with a viral infection and a diagnosis of failure to thrive, because she just isn’t eating enough. After all the formula switches, her mom says she’s just refusing to eat.

Savannah says she doesn’t know if they’d be in the hospital right now if they could find enough formula for their daughter.

“A lot of the recommendations that we’ve been giving to families [to get through the shortage] work for most, but not all,” says Dr. Elizabeth Mack, chief of pediatric critical care at Shawn Jenkins. “Children that have significant malabsorption issues requiring extensively hydrolyzed or amino acid-based formulas… there’s no store brand for that,” Mack says.

Two days ago, Clover had a gastrostomy tube, or G-tube, surgically placed directly into her stomach so her parents could feed her more easily.

“We were kind of pushed by doctors to do a G-tube to basically help her get the nutrition that she can’t take by mouth, or just to give her more nutrition in general,” Savannah says.

Now they have a prescription for formula, which is a relief, but the company that will supply it to them can’t guarantee they’ll be able to get Neocate. They’ve only promised to supply one of three possible options.

“Neocate is the only formula that she’s consistently taken,” Savannah says. “Our biggest thing right now is really not knowing what to do if we go home and don’t have the Neocate.”

She says they don’t know if she’ll be able to tolerate other formulas. The G-tube will help, but they’re worried that if they can’t consistently get the same kind of formula, Clover won’t learn to bottle feed well, which will just prolong her feeding difficulties.

“What times are we living in right now?” she says. “It feels very bizarre to be honest.”

A doctor at Le Bonheur Children’s Hospital in Memphis, Tennessee, says he admitted two young patients — a toddler and a preschooler — because the specialty formula they need is out of stock and they haven’t been able to tolerate any replacements.

The toddler, who had been in the hospital for about a week, was discharged Tuesday. The preschooler, who was admitted in April, remains in the hospital, according to a hospital spokesperson.

“It’s been a crisis since February of shifting and trying to sift through and figure something else to work,” Dr. Mark Corkins, a pediatric gastroenterologist at the hospital who is treating the patients, told CNN in a telephone interview.

Corkins specializes in treating problems with digestion and absorption. He says he has between 15 and 20 patients that his team is working closely with to find solutions to the formula shortage.

Both of the children hospitalized in Memphis have short bowel syndrome and can’t absorb full-size proteins. The condition is rare, affecting about 25 out of every 100,000 newborns.

They rely on a formula made of amino acids, the building blocks of proteins. These broken-down proteins don’t have to be digested; they can just be absorbed by the gut.

Formula maker Abbott produced about 80% of the specialty formula they need, a brand called EleCare. When its Sturgis, Michigan, production plant shut down in February, patients on that formula were switched to those made by smaller suppliers, and now those stocks have run out too, Corkins said.

He said they tried to use other kinds of formulas, made with chopped-up proteins, but it didn’t work. The kids couldn’t tolerate them and became dehydrated.

“In the hospital, we give them IV fluids, and the other thing we give them is IV nutrition. That’s not ideal,” he said. The doctors want to feed these children by mouth so they can use their gut. The more they use their gut, the more it develops.

Corkins says both children are otherwise healthy enough to be at home. They were hospitalized so they could be fed.

“While all U.S. hospitals use infant formula and accessories, especially those with birthing and pediatric units, children’s hospitals are more likely to use specialty formulas that meet the unique nutritional needs of the sickest infants and children. Many of these families must go to the hospital as a last resort for their child to be fed intravenously,” the Children’s Hospital Association said in a written statement.

The problem has become so serious that on Wednesday, President Joe Biden invoked the Defense Production Act to compel companies that make ingredients for baby formula to prioritize delivery of those supplies to formula manufacturers. The administration also plans to use government contracted cargo planes to fly formula in from other countries.

The Children’s Hospital Association said they were encouraged by these steps and were cautiously optimistic that these efforts will ease the crisis and ensure the safe feeding of the nation’s children.

“We also need long term solutions to avoid future crises. We continue to work with the FDA and manufacturers to identify and employ strategies to avoid future shortages and to ensure that the most vulnerable patients receive the critical nutritional supplements necessary to their treatment,” the statement said.