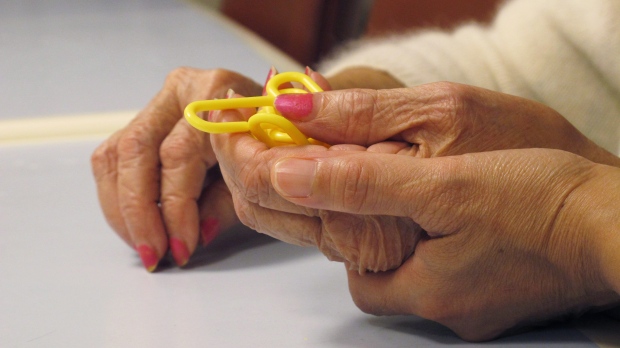 MONTREAL — It was just weeks before the first wave of COVID-19 really began to hit Quebec when Elaine Hanson had to make a heartbreaking decision about her mother.

Ten years ago, Hanson and her family had begun to see a gradual decline in her 84-year-old mother’s cognitive state. Then it started to accelerate. They did what they could to make her living conditions comfortable: at first that meant arranging for caregivers to come to her mom’s home. When she could no longer live by herself, they moved her into Hanson’s brother’s house. Hanson, who lives in Ontario, would visit as often as she could.

“We created a dementia home with names on doors and tasks specifically designed for her to feel good about herself – setting the table or making the coffee. Tasks where when an elderly person has done them, it’s probably one of the last things they forget. She remembered how to do that and it was a play on making her feel good,” says Hanson.

The family had been through this before – Hanson’s late father had been diagnosed with early onset Alzheimer’s. But in February, 2020, the family’s efforts were no longer enough. The decision was made to move Hanson’s mother into a West Island long-term care residence.

In November, she was diagnosed with COVID-19. She suffered from a high temperature and Hanson said during her bout with the disease, her mother was more confused than usual.

“She had a few days of really not feeling well at all. She was not communicating well. It was about a week where it was quite difficult. We did not know where we were going to end up with her,” says Hanson. “One of the biggest things was she did not understand why she couldn’t leave her room. It was traumatizing.”

The pandemic has been difficult for all families with loved ones in long-term care homes, where the majority of Quebec’s deaths from the novel coronavirus have occurred. The first wave was marked by rampant outbreaks in CHSLDs – sometimes resulting in horrific conditions. But for families of residents with dementia, the inability to properly explain what is going on and why life has changed so drastically often compounds the pain.

“People with dementia have difficulty communicating. They continue to feel stress and isolation is often something they can’t express, but they’re feeling it,” says Hanson. “You can imagine, a vast community of residents not having their daily or weekly visits from loved ones, for sure it was very difficult on them and very difficult on families.”

No statistics are kept on how many of Quebec’s COVID-19 patients also suffer from dementia. But experts say that dementia sufferers likely account for a sizable portion of the province’s COVID-related deaths.

“It’s a bit too early, but what we can say is that 80 per cent of the deaths occurred in long-term care and 70 per cent of patients in long-term care have dementia,” says Isabelle Vedel, an associate professor of family medicine at McGill University who is studying the effects of the pandemic on people with dementia. “Our guess is the vast majority of deaths occurred in persons living with dementia.”

“If the dementia is more advanced, there’s challenges there. They may not understand why there is intravenous treatment,” says Jose Morais, director of geriatric medicine at McGill. “Someone who has dementia obviously has less capacity to cope with all the instructions and the change in routine that COVID imposes.”

Morais pointed out that some patients who are hospitalized may become more aggressive due to their confusion.

She noted this was particularly an issue during the pandemic’s first wave, when no caregivers were permitted in long-term care facilities or hospitals.

Vedel said the pandemic has had dual negative effects: there’s the fact that so many people with dementia, many of whom are elderly and high-risk are getting COVID-19. But alongside that is how the pandemic is affecting people who might never actually get the virus: the isolation that is the result of public health measures is also causing a decline in many people’s cognitive functioning.

“People are living with somebody who has advanced dementia who were getting support at home, even CLSC support for example. Families are terrified to let any type of professional caregiver into their home because of COVID,” said Claire Webster, a certified Alzheimer care consultation and founder of Caregiver Crosswalk.

The pandemic has brought to light long-simmering issues within Quebec’s elder care system. Hanson hopes that when the pandemic does finally end, the lessons learned will lead to improved care for people with dementia.

“I think right across the spectrum, organizations that are the primary advocate for those living with dementa, such as the Alzheimer’s Society will really be incorporating a new focus on how do we advocate for and work around some of the staffing shortages we’re seeing? How do we increase the quality of training for dementia care?” she says. “The expected numbers by 2030 will be very close to 1 million (people with dementia in Canada). This whole illness is very significant and this pandemic, for sure, unearthed a lot of issues in our long-term care system.”