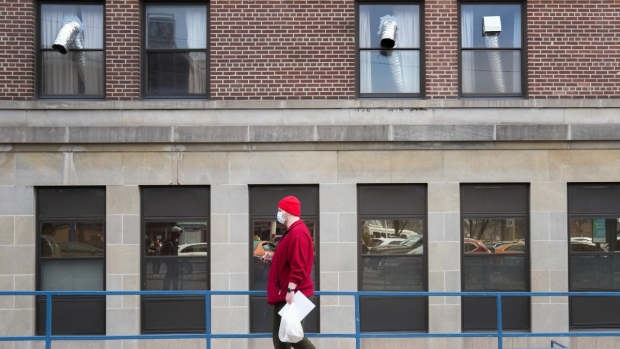 After more than two years of COVID-19 and millions of cases, the question of why some people get infected and others do not remains somewhat of a mystery.

While multiple factors will determine whether a person gets sick, preventing someone from getting the virus in the first place is something researchers continue to pore over.

Since their rollout, COVID-19 vaccines have been shown to effectively prevent serious illness requiring hospitalization and death, although their effectiveness does wane over time and vaccinated individuals can still contract the virus, as made evident by the winter wave of the highly-transmissible Omicron variant.

Health officials also are warning about a recent uptick in cases, likely due to a combination of the BA.2 subvariant, waning immunity and the lifting of a number of provincial pandemic restrictions, including mask mandates.

The number of people hospitalized for COVID-19 in Canada remains far below where it was during the Omicron wave but hospitalizations are slowly rising, the latest data from the Public Health Agency of Canada show.

Here is what we know about the factors that could lead to a COVID-19 infection, and potential disease, and what recent studies say about the issue.

When it comes to infection and disease, Dr. Donald Vinh, an infectious disease specialist at McGill University Health Centre in Montreal, notes that there are multiple steps involved.

First, a person needs to be infected, meaning they are exposed to the virus and it has gotten into their cells.

After that, a person may be asymptomatic, have mild symptoms or develop a more severe or life-threatening disease.

Vinh is part of an international consortium called the COVID Human Genetic Effort trying to understand why some people develop severe disease — and what treatments may help — and why others may not get infected at all, a problem he described as the “Achilles heel” of the pandemic.

Pointing to a possible genetic component, he says viruses attach to a range of proteins on cells. The theory is that some people may carry different protein variants, making them less appealing to viruses.

“We all have differences in our genes. Some differences, they’re not a big deal or at least we don’t think they’re a big deal under most common scenarios or clinical contexts, and of course, there are some genes that can be profoundly disastrous,” he told CTVNews.ca in a phone interview on Monday.

Eleanor Fish, a professor in the department of immunology at the University of Toronto and a scientist with the University Health Network, told CTVNews.ca in a phone interview on Monday that multiple factors will influence transmission.

But the most important feature, beyond the virus itself, is a person’s immune status.

And although a child’s immune systems is far less “educated” compared to adults, Fish said the immune response leans more toward what is referred to as innate immunity.

“It’s already primed and activated in certain facets, so they’re better equipped to deal very rapidly with an infection as compared to adults,” Fish said.

But because children have smaller airways, this could explain why more are being hospitalized for COVID-19, she added, given Omicron tends to favour the upper respiratory tract instead of the lungs.

Fish also pointed to the interferon response, or proteins that help the body mount an early and innate immune response to clear a virus.

Some viruses like SARS-CoV-2, she said, have evolved to specifically block or inhibit the production of these interferons, which can result in more severe infection.

A child’s interferon response can be activated fairly rapidly, for instance, but genetic mutations could result in more severe disease.

“I think this is a really important strategy we’re not seriously considering,” she said.

A recent trial where volunteers were deliberately exposed to the novel coronavirus found symptoms had no effect on how likely an infected person will pass the disease to others, Reuters reports.

In January, a pre-print study offered some preliminary evidence to suggest the coronavirus loses most of its infectiousness after 20 minutes in air.

Age and pre-existing medical conditions are among the highest risk factors when it comes to developing more severe disease from SARS-CoV-2, the coronavirus that causes COVID-19.

Older adults, especially those over 60, make up a greater share of COVID-19 hospitalizations and deaths than younger age groups.

As of April 1, 2022, the Public Health Agency of Canada reports that while more than half of all reported cases of COVID-19 have involved those under 60, individuals older than that have made up nearly two-thirds of all hospitalizations and the vast majority of deaths.

A number of chronic medical conditions, including lung and heart disease, hypertension or high blood pressure, diabetes, kidney and liver disease, dementia and stroke, can lead to worse outcomes.

Those who are immunocompromised due to an underlying medical condition such as cancer or because they are on chemotherapy can have lower immune systems. Those who are obese also are at higher risk.

In Sweden, a study published at the end of March in the medical journal The Lancet, found the risk of COVID-19 reinfection and hospitalization among those who recovered from a previous infection remained low for up to 20 months. Natural immunity plus either one or two doses of a COVID-19 vaccine further reduced the risk by up to nine months, although researchers say the differences in absolute numbers were small.

Evidence also has emerged to suggest the body’s T-cell response, which can help fight viral infections as part of the immune system, is effective at mitigating COVID-19 disease.

T-cells can be generated from vaccination and previous infection.

A small study from January found exposure to a common coronavirus cold could offer some protection.

In November, British researchers published a study that found a subset of health-care workers, possibly exposed to COVID-19, developed no antibodies but did generate a broad T-cell response, suggesting that T-cells cleared the virus before there were any symptoms or positive test results.

Some T-cells help B cells, which are also part of the immune system, produce more mature antibodies, while others go after cells infected with a virus.

As far as why some people get severe disease and others don’t, he said evidence shows elderly males in particular have an aberrant immune response where, for reasons unclear, they carry natural autoantibodies that specifically attack the Type 1 interferon proteins involved in the body’s immune response.