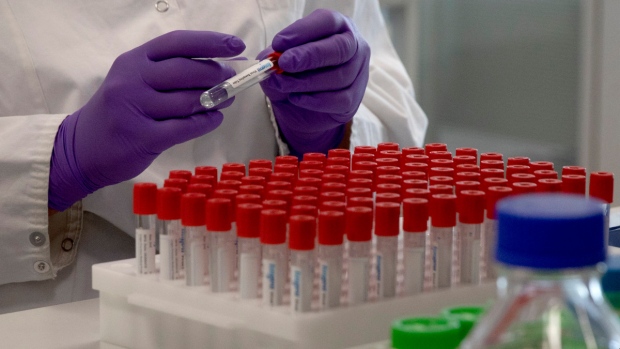 Parts of Canada are seeing surges in COVID-19 cases, leading scientists to wonder whether those regions need to shut back down to avoid further outbreaks.

Daily cases have tripled in B.C. over the last couple weeks, while a recent spike in Alberta is also causing alarm. Ontario, meanwhile, saw its daily case count inch up over 200 on Tuesday, before scaling back down to 103 by Thursday.

“You can either look at it and say: is this the first wave with a really long tail, or is this truly a second wave?” said Dr. Lynora Saxinger, an infectious disease expert at the University of Alberta.

“I think no matter what you call it, when I look at the numbers, I’m concerned.”

While provinces primarily look at daily case counts to indicate when to close or re-open regions, some scientists believe another metric — the effective reproduction rate of the virus — can also offer insight.

The reproduction rate, or R0 is the number of people one infected person is expected to infect. Without any safety precautions in place, the novel coronavirus’s R0 is between 2 and 4. H1N1 has an R0 of 1.5, while measles, which is highly contagious, is thought to be around 18.

The effective reproduction number however — known as Rt — changes over time and is dependent on our own behaviour like physical distancing and wearing face coverings, says Ryan Imgrund, a biostatician who calculates daily Rt values for Ontario.

“If the value is two, that means one person is accountable for two secondary infections,” said Imgrund, who calculated Ontario’s Rt at 1.16 on Thursday. “We really want to get that value under one in order to lower our numbers.”

Saxinger described the effective reproduction number as a way of determining when community spread is “getting out of a controlled phase,” and said Rt value in Alberta, which was around 1.46 on Thursday, was troubling.

“If it’s consistently above one, you can become quite concerned that you’re not controlling things adequately,” Saxinger said.

“Certainly in some segments of the population (in Alberta) the number is high enough that I think measures likely are going to be required to turn things around again.”

He said a prolonged Rt value above 1.3 is “really, really troubling,” and one month at that rate would mean daily cases “increasing tenfold.”

“It would mean we would need to change things,” he said. “It’s all about keeping it under one.”

Imgrund tweets out his Rt calculations for Ontario daily, breaking down the regions of the province in graphs to show where the values are high (shown in red), moderate (yellow) and relatively low (green).

Different scientists use different methods to calculate Rt, in what Imgrund calls a “complex” process, but Saxinger says most of those methods result in the same number range.

There are downsides to Rt, however.

Experts say the value on its own doesn’t tell us everything, and the number can swing wildly depending on how many cases are in a community to begin with.

That happened last month in Kingston following a nail salon outbreak where 27 people became infected. Imgrund calculated the Rt for the area at 8.24 on June 27. The number dropped to 4.23 the following day and 2.20 five days later.

“If there are very few cases (to begin with) you can double or triple your case number very quickly and that will lead to a very, very high number for the Rt value,” Saxinger said. “And the Rt (wouldn’t) necessarily reflect all that much.

“So it’s best to look at it with things like the actual current number of active cases and the total number of cases that you’re seeing in the community.”

Imgrund says people also need to understand the confidence interval, which he includes in his charts, when exploring Rt values. Confidence intervals measure the degree of certainty or uncertainty in the method of calculation.

Imgrund said calculating Rt for larger areas will give you a smaller confidence interval, which can translate to a more accurate value.

“But if the community is very small, there’ll be a lot more fluctuation,” he added.

A high Rt value with a confidence interval close to 1 could mean an area is experiencing a high degree of community spread, Imgrund said, and localized closures and rolling back reopenings could be a solution to temper that.

Stephen Hoption Cann, a clinical professor at UBC’s School of Population and Public Health, believes Rt can’t offer a clear picture of transmission on its own.

An Rt around 1 won’t have the same implications everywhere, he said, pointing to the situation in the COVID hot spot of Florida, which had a Rt of 0.99 as of Thursday despite its high number of daily cases, according to the website Rt.live.

“You also have to look at new cases and how many appeared for every hundred people you test. And yeah, if it looks like it’s going to explode, more precautions may need to be put in place.”

B.C. announced restrictions to bars and restaurants Wednesday amid the spike in cases in the province.

Saxinger expects that to be common across the country as case counts continue to ebb and flow.

“I think a lot of people just focused on flattening the curve, and the message seemed to be that once you got to the end of that hump that it was OK,” she said. “But what we actually are seeing is that as soon as places start to relax restrictions, it just starts to come up again.

“And it’s going to do that until we have the vaccine in place…. I would completely expect waxing and waning public health measures will be necessary for at least a year, possibly longer.”

This report by The Canadian Press was first published July 24, 2020