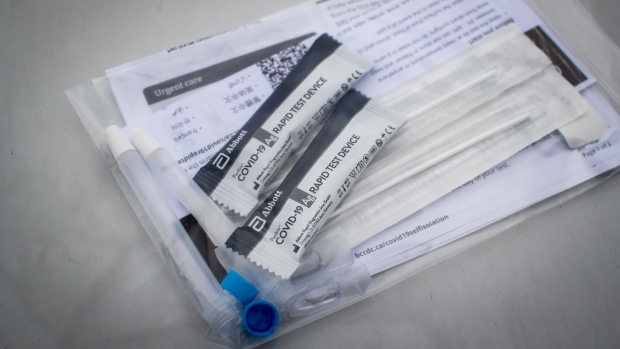 Nearly two in five Canadians say they have experienced difficulties in trying to obtain a COVID-19 rapid test, according to new survey results from Statistics Canada.

According to the survey released Thursday, 39 per cent of participants aged 15 and older reported at least one instance where they would have liked a COVID-19 rapid test for themselves or a child in their household, but could not get one.

In late 2021, the more transmissible Omicron variant was first reported in Canada and quickly spread across provinces and territories. The sudden spike in COVID-19 cases put a strain on PCR testing, increasing demand for rapid antigen tests Canadians could administer to themselves.

Using an online crowdsource questionnaire conducted from Feb. 21 to March 13, 2022, StatCan asked participants a series of questions about their experiences with COVID-19 testing between Dec. 1, 2021 and the date they completed the questionnaire.

StatCan reported difficulties accessing rapid tests varied across the country, ranging from seven per cent in Saskatchewan up to 50 per cent for those in British Columbia.

Among the 36,857 Canadians surveyed who wanted a rapid test but could not obtain one, 60 per cent said the tests were unavailable when they tried to get them. In addition, 25 per cent of these participants reported they never ended up getting one as they had assumed that no tests were available.

Other reasons why Canadians said they had difficulties accessing rapid tests included not knowing where to go to get a test (21 per cent), the available tests were too expensive (22 per cent), and the wait time to get a test or an appointment was too long (18 per cent).

The survey results from StatCan add to the recent challenges experts have expressed in determining the current extent of COVID-19 spread in communities as provinces limit testing and change other means of virus surveillance, such as wastewater analysis.

StatCan says most of those who said they had difficulties accessing rapid tests reported the issue occurred in December 2021 (64 per cent) or January 2022 (61), while only 26 per cent of respondents reported experiencing these difficulties in February or March 2022.

According to StatCan, this may suggest that there were fewer barriers to accessing rapid tests in more recent months.

While difficulties in getting rapid tests were similar between households with children and those without, StatCan found issues in test procurement varied when considering the age of a family’s children.

StatCan says households with school-aged children may have experienced less difficulties in getting COVID-19 rapid tests because many schools provided test kits to students.

In addition, the survey found a higher portion of essential workers reported difficulties accessing rapid tests (42 per cent) compared to those participants who were not working in essential jobs (37 per cent).

Those surveyed who reported having a disability also were found to have increased difficulties obtaining rapid tests.

According to Health Canada, the federal government has deployed more than 94,000,000 rapid tests across the country to care settings to be administered to patients. However, only 15,302,116 rapid tests have been administered as of March 25.

Among those surveyed, StatCan reports 55 per cent used a rapid test between December 2021 and the date of data collection.