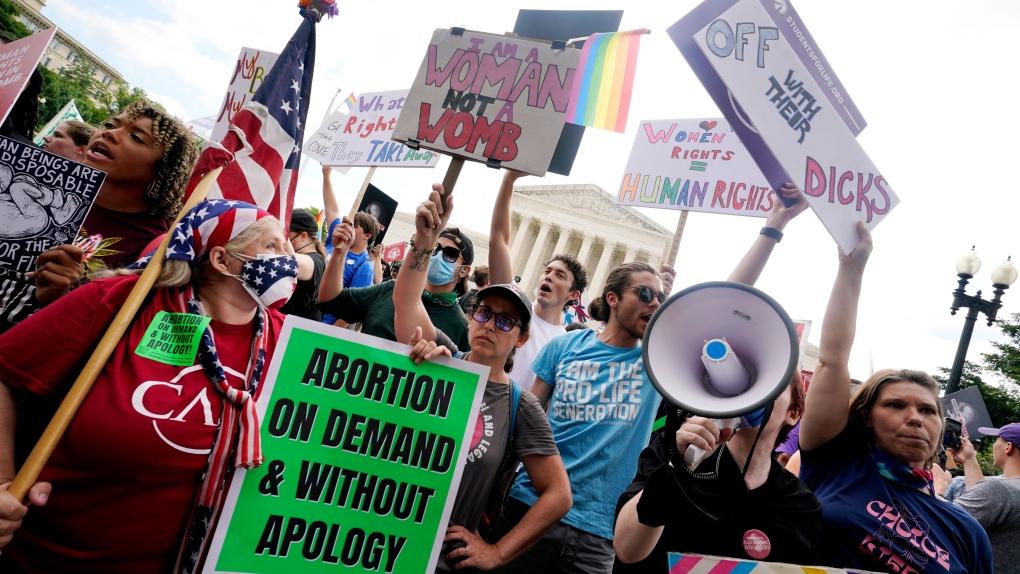 With the overturning of Roe v. Wade opening the door to abortion bans in the U.S., Canadian Tiktokers are welcoming Americans who are considering travelling north of the border to get an abortion.

“To my American besties: I live 20 minutes from the Michigan border,” one TikTok user wrote in a video post. “If you want to come ‘see my cows’ for the weekend let me know. I can give you a safe space while you recover from ‘seeing my cows.’”

Canadian TikTokers, using the hashtag #wegodowntogether, are offering Americans a place to stay and recover, often under the guise of an innocuous activity, like “camping” or “visiting friends.”

“I’m 90 minutes from the U.S. border at Niagara Falls and wine country,” wrote another TikToker. “My 4 sisters and I would love to go ‘wine tasting’ with you and spend a few days recovering. Let’s hang out. We’ve got you.”

But what are the legal implications of Americans actually seeking the medical procedure in Canada?

Pam Hrick, general counsel for Women’s Legal Education and Action Fund, says the issues that could arise depend on the particular state Americans are coming from.

“There are no legal issues to come into the country and access that healthcare procedure,” she told CTV’s Your Morning on Tuesday. “There are no laws right now in the States, criminalizing crossing the borders to get an abortion somewhere where it is legal. However, that might change. So it’s going to be important for people who are seeking the procedure to check in with local abortion care providers and supports to understand what the state of law is at the time of their thinking about access.”

Hrick also pointed out that, although Canadian healthcare does not have legal parameters that restrict abortion procedures, access complications are still a reality for many Canadians.

“Right now here in Canada we have access issues as well. There are no laws applicable to abortion care, and it is treated as healthcare,” Hrick said.

“Whether or not you could actually access that healthcare in this country depends on where you live, whether you can take time off work and you have to travel in order to access an abortion, whether there are local providers in your community. So it really isn’t equitable across the country, and we need to take urgent action to address that,” she added.

Carolyn Egan, with the Abortion Rights Coalition of Canada, said Americans seeking abortion would need to pay for the procedures themselves, which would not affect Canada’s healthcare system.

“We have situations now where the clinics in Toronto do offer abortions, mostly for people who might be internationals. They pay directly to the clinic. So it’s not an expense to [Canada’s] healthcare system. If any women chooses to come here from the United States, they would not be accessing hospital abortions. They would be going to the free-standing clinics,” she explained

Despite the viral trend on TikTok, Egan says the number of Americans coming to Canada for the procedure is “fairly low.”

“For the most part, Americans do not have passports. There are usually going to be more vulnerable women from low-income communities, Black and Hispanic communities, and the understanding that we have is that they will be given access to procedures in another state,” she said.

“Certainly Canadians are happy to welcome them if they do come,” Egan added.

Have you tried accessing abortion services in Canada?

Following the U.S. Supreme Court’s decision to overturn Roe v. Wade, CTVNews.ca wants to hear from Canadians who have had an abortion.

Did you struggle to access abortion services or information in Canada? Was it difficult to secure an appointment?

Tell us your story by emailing dotcom@bellmedia.ca, and include your name and location. Your comments may be used in a CTVNews.ca story.

U.S. FDA authorizes change in how monkeypox vaccine is given, stretching supply amid high demand