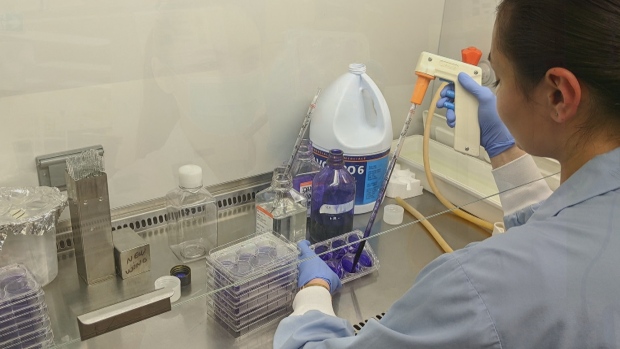 TORONTO — Viruses typically don’t have the best reputation, especially during a pandemic. But medical researchers are increasingly looking to them as a way to treat cancer.

Taylor Jamieson-Datzkiw is a medical student at the University of Ottawa and at the Ottawa Hospital Research Institute where she created new viruses that are capable of neutralizing aggressive forms of breast and ovarian cancer.

She is now being awarded the Mitacs Prize for her revolutionary medical discovery and mentorship of Indigenous youth.

“As cancers gain the ability to grow uncontrollably within the body, there’s a lot of trade-offs that they have to make,” Jamieson-Datzkiw told CTV’s Your Morning on Monday. “One of those trade-offs is they actually get pretty bad at fighting off viruses.”

She added, “What we do is we take viruses that are not super strong […] and we can introduce them into a body where there’s healthy cells and there’s cancer cells. But the cancer cells are not able to fight the infection, so they actually replicate the virus and they can die due to infection.”

Jamieson-Datzkiw says the viruses can also help sensitize cancer cells to drugs and other therapies, as well alert the body’s immune system that something is wrong.

When asked if the virus could affect healthy cells, she explained “When we get a cold and we don’t get super sick, that’s because our healthy cells were able to fight off that infection. But interestingly, cancer cells have undergone so many genetic changes, so many mutations that have allowed them to grow without any control.”

She added, “So the viruses get into a healthy cell and the healthy cell says, ‘Hey, you don’t belong’ and it turns on its anti-viral mechanisms to shut down the infection and then you have a cancer cell where the virus just starts replicating uncontrollably.”

Jamieson-Datzkiw is an active role model and mentor to other Indigenous students, including volunteering her time with her local Let’s Talk Science’s mentorship program for Indigenous youth.

She says her win in the Indigenous category means that she’s doing important research, especially for people whose cancer cells have become resistant to conventional therapies.

“It’s really nice to be recognized for what I do inside and outside the lab,” she said.