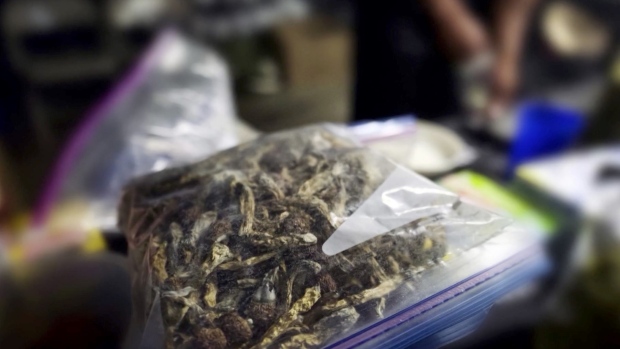 TORONTO — Canadian tech entrepreneur and venture capitalist Sanjay Singhal was in his early 30s when he was first diagnosed with bipolar disorder. It had been a lifelong struggle — one moment feeling great, then suddenly mentally paralyzed and unable to get out of bed for three straight days.

“When I went manic, I would make bad decisions … spend money unreasonably,” he said. “Up until age 38, my life was a roller coaster.”

Today, Singhal is 56 and on a mission to transform mental health care. He is the philanthropist behind Canada’s first psychedelic psychotherapy research centre for mental health at Toronto’s University Health Network (UHN). Starting with a $5 million donation made through the Nikean Foundation that he founded, Singhal hopes researchers at the centre can unlock the potential of psychedelic medicine and find answers on how psilocybin and a so-called “God molecule” can help transform mental health care.

The founder of several start-ups, including Audiobooks.com, Singhal spoke to CTV National News about his struggles with mental health even as he built several successful businesses.

“I was very aware of what mental illness can do,” he said in his very first on-air interview about the subject and his personal struggles with it.

But it is not just about him. He also has a daughter, Nikki, who has struggled with anorexia since childhood that he also wants to help. She was hospitalized at the age of eight, and again when she was 16. Now a third year resident in psychiatry at the University of Toronto, she has done well but continues to navigate through her struggles.

A chance presentation several years ago by Robin Carhart-Harris, one of the world’s leading researchers on psychedelic medicine that mentioned psilocybin as a potential treatment for anorexia piqued Singhal’s interest. Carhart-Harris is the head of the Centre for Psychedelic Research, a division of Brain Sciences with the Faculty of Medicine at the Imperial College London.

“I thought, oh my God, I have to go listen to this guy and see what’s going on…I spoke to him afterwards, drove him to the airport, and then a couple of weeks later, my daughter and I both flew to London … we were amazed at the possibilities of what this could do.”

But Singhal is quick to note that at the Canadian research centre, psychedelic medicine will only be used alongside therapy in a controlled setting.

The potential of psychedelic therapy goes as far back as the 1950s when several pioneering psychiatrists experimented with LSD as a possible treatment for mental health disorders. Some of the earliest groundbreaking experiments and research happened in Saskatchewan. But studies into these drugs ended by the 1960s amid social and political backlash.

For scientists, the new research centre represents potential for transformational change in mental health therapies and offers new hope for many patients.

“I was thrilled beyond belief because psychiatry hasn’t had a real paradigm shift or a new opportunity at treatment in a long time,” said Dr. Susan Abbey, psychiatrist-in-Chief for the Centre for Mental Health at UHN, in an interview.

“There truly is a signal that there is something to this. And, really, every major academic center in mental health in the world is trying to begin to conduct research in psychedelic, particularly psychedelic assisted psychotherapy.”

There are many disorders, including post-traumatic stress disorder and end-of-life distress, that are treatment resistant, says Abbey.

Dr. Emma Hapke, a staff psychiatrist with UHN and lecturer at the University of Toronto agrees.

“We haven’t had a lot of new treatments in psychiatry in a long time. There seem to be more people suffering…struggling and there is an appetite for something new that might work,” Hapke told CTV National News in a phone interview.

Traditional medications prescribed for mental health care typically suppress symptoms, Hapke said. While much more research is needed, there are suggestions that psychedelics work differently and do not require ongoing use.

The centre is planning six to eight research projects, including psilocybin therapy for end-of-life grief, grief suffered by caregivers, families who have lost a child, and body dysmorphic disorder.

It also hopes to research a separate psychedelic called 5-MeO-DMT, also called “The God Molecule” due to the profound psychoactive effects on the user, as a potential therapy for PTSD. Found in a wide variety of plants, it is also secreted by the glands of the Sonoran Desert Toad. It is illegal in the United States and Canada (with some special exemptions by Health Canada). BuzzFeed News once described it as “the most powerful psychedelic on the planet.”

The centre is also looking at training programs for licensed therapists to learn how to work with psychedelics, since treatments will likely also involve therapy for patients to understand the insights that emerge with treatment.

TRYING PSILOCYBIN AND THE ‘GOD MOLECULE’

Singhal grew up in a tumultuous household, and from a young age, built emotional walls around himself without even realizing. If he encountered someone who clearly needed emotional comfort, his automatic response was escape.

“I was afraid of other people’s emotions,” Singhal said. After three psilocybin sessions, everything changed.

“Now, my instant thought is, I need to sit down with this person and comfort them, find out what’s going on. That has been tremendously beneficial for my relationships.”

Singhal’s original intent when he decided to try psilocybin as a therapy was to find out why he sometimes drank too much and to get a handle on that aspect of his life. He had already been seeing a therapist for 20 years, and while it has helped him get through some of the most depressed periods of his life, psilocybin was different. Suddenly, he felt liberated, he said.

“The psilocybin took me on this circuitous journey of, no, let’s explore what’s really going on here,” he said.

But Singhal is perhaps even more interested in the potential of 5-MeO-DMT, which is still in the drug development process phase and likely years away from clinical trial use.

One of the challenges with psilocybin and MDMA is that they are expensive treatments, Singhal explained. It takes four to six hours in a room with one or two trained therapists, licensed professionals, so a single treatment can run upwards of $2,000 or more.

”You’re not aware you’re conscious, but you’re not aware of what’s going on so when you come back from that trip, all you know is something beautiful happens. And all of a sudden you feel better,” Singhal said.

While much of the new research involving these psychedelics are still considered very early stage, Singhal’s experience and newfound peace gives him hope.

“The apparent lack of adverse effects is reassuring and consistent with what we know about these compounds more generally – that when administered in a responsible manner, to suitable and prepared individuals, they are almost invariably well-tolerated,” according to a research commentary on 5-MeO-DMT published in 2019 in The American Journal of Drug and Alcohol Abuse.

But it also added that “any conclusions pertaining to the antidepressant efficacy of 5-MeO-DMT must wait until the appropriate clinical trials are conducted.”

“We need to take a very careful approach… so that we don’t just get so swept away with potential excitement, but that we’re really understanding how medications work what they do for people,” said Abbey.

Singhal acknowledges that much of the evidence that psychedelics could be used to help with anorexia or other mental disorders is anecdotal, but it is enough that he is willing to write a big check to fund the research necessary.

“We’re all traumatized children running around in adult bodies, and these medicines can help us all,” Singhal said.

“I would say, now, three years later, my daughter has tried various treatments, and she’s still struggling, but she has hope. And if … this gives somebody hope, that’s a tremendous gift.”