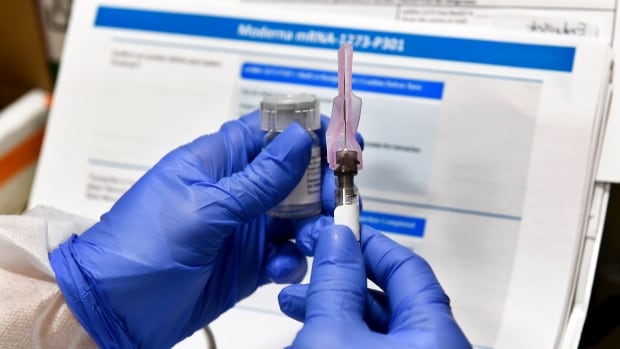 The head of a U.S. biotechnology company that is developing one of the most promising COVID-19 vaccine candidates says Canada is not far behind other countries when it comes to receiving doses of its vaccine.

“Canada is not at the back of the line,” Noubar Afeyan, co-founder and chairman of Moderna, told CBC’s Chief Political Correspondent Rosemary Barton on Sunday.

Afeyan said because Canada was among the first countries to make a pre-order with Moderna, the country is guaranteed to receive a certain portion of the company’s initial batch of doses — as long as the vaccine proves safe and effective and is given regulatory approval.

The Canadian government secured an agreement on Aug. 5 with Moderna for 20 million doses of its mRNA vaccine, with the option to procure an additional 36 million doses.

Moderna’s vaccine is currently in Stage 3 clinical trials. Preliminary data released two weeks ago showed it appears to be 94.5 per cent effective.

The Liberal government came under intense pressure this week to lay out a timeline for when Canadians will begin receiving an inoculation, with opposition politicians and some premiers arguing Canada was falling behind other countries in its planning for a mass vaccination campaign.

Federal officials have said if all goes well as many as three million Canadians — mainly those in “high-priority groups” — could be vaccinated in early 2021.

Moderna is in the process of applying for emergency-use authorization with the U.S. Food and Drug Administration. Once the company obtains that authorization, Afeyan said the company will begin shipping doses to countries that have made pre-orders, including Canada.

Afeyan said he expects to start shipping the vaccine to Canada in the first quarter of 2021 and the quantity of shipments should increase through the second quarter and throughout the rest of the year.

The company expects to be able to produce a total of 20 million doses by the end of 2020 and between 500 million and 1 billion doses throughout 2021.

Moderna submitted early safety and pre-clinical data from Phase 1 and 2 trials with Health Canada last month as part of the regulator’s rolling regulatory review process. Health Canada must approve any COVID-19 vaccine before it can be distributed to Canadians.