Maj.-Gen. Dany Fortin, the military commander leading vaccine logistics at the Public Health Agency of Canada (PHAC), said today Canada doesn’t know how many Moderna doses will arrive in the weeks ahead and the company hasn’t said why it has reduced shipments to our country.

Speaking to reporters at a public health briefing, Fortin said 180,000 Moderna doses arrived this morning but the government has no “visibility” on how many more shots will be delivered this month and next.

Despite these unknowns, Fortin said Canada is still expecting 2 million Moderna doses to be delivered by the end of March to meet the prime minister’s promised vaccination targets.

According to a planning document disseminated to the provinces this week, PHAC has already warned provinces to expect disruptions with the next scheduled Moderna delivery, which is set to arrive on Feb. 22.

The Massachusetts-based company, which delivers shots every three weeks, told Canadian officials last week that the shipments for the week of Feb. 1 would be reduced by 20-25 per cent, and now it appears this month’s second shipment is also likely to be lower than expected.

“Moderna reduced shipment quantities for the week of 1-7 Feb. (from 230,400 to 180,000 doses). The week of 22 Feb. will also be impacted, but Moderna cannot confirm allocations for that week yet,” the PHAC document sent to the province reads.

Fortin said he had no idea just how many doses will be on hand by the end of the month, but he knows it will be less than expected.

“I can’t really tell you what the quantity will be. We don’t expect to receive 249,000 at this time,” he said. “We’ll soon be able to share that with provinces, in confidence. We just don’t know what those numbers are for certain.”

Fortin conceded that the dearth of information is “a real limitation in the short term,” saying he understood why provinces are frustrated that they’ve had to cancel appointments and push back second doses as a result of the severe delivery disruptions.

“I completely understand that it’s making it more difficult for provinces to prepare clinics,” he said. 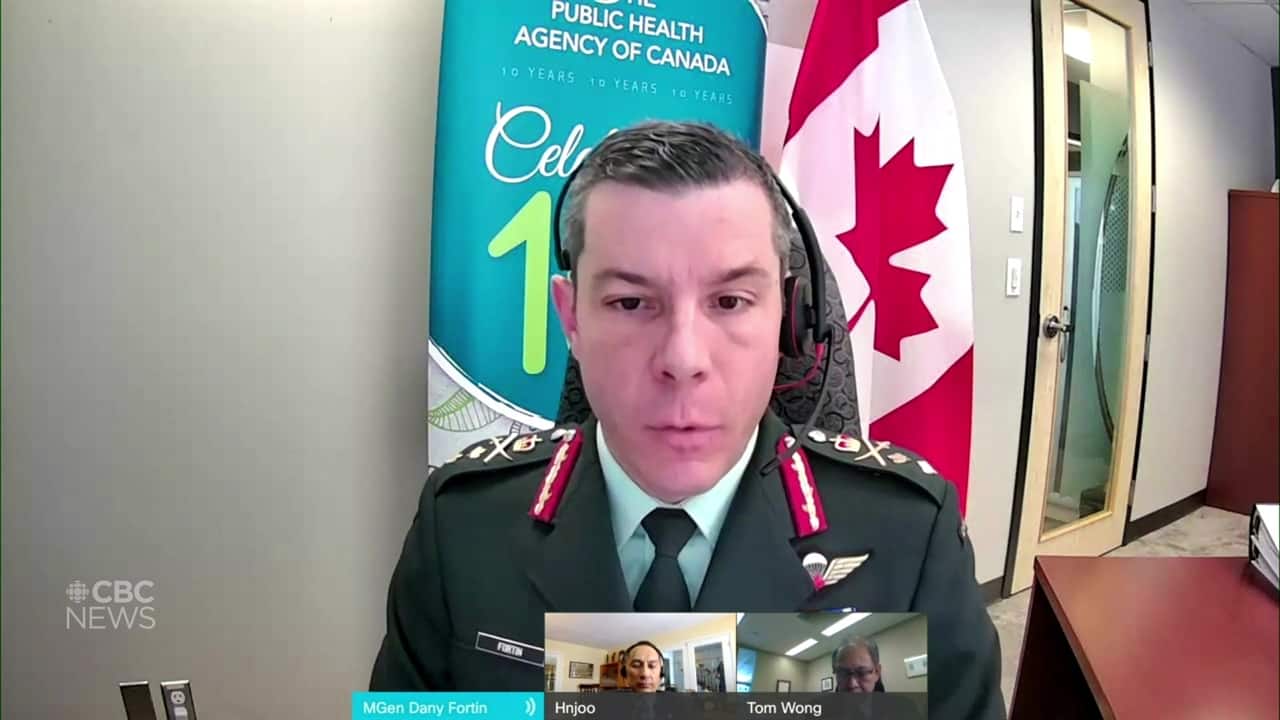 Maj.-Gen. Dany Fortin says he’s not sure how many doses Canada will receive of Moderna’s COVID-19 vaccine in the weeks ahead and doesn’t know what’s causing the delay. 2:37

While Pfizer has offered some explanation for why its shipments have been dramatically lower than expected — plant upgrades at a facility in Belgium caused deliveries to drop by 80 per cent — Fortin said Moderna hasn’t said why it’s had to put off tens of thousands of doses to a later delivery date.

“They haven’t shared the specific challenges that they may experience in their yields or in their production,” Fortin said. “I think Moderna has indicated that they are, in good faith, trying their best to provide as many doses as possible.”

Health Canada regulators are expected to approve another promising vaccine candidate — the product from AstraZeneca — in the “coming days,” which could give a jolt to Canada’s stalled vaccination campaign.

But for that product, too, Fortin said he didn’t know how many, if any, doses would be delivered in the coming weeks. He said PHAC has developed a number of possible delivery scenarios if AstraZeneca secures the green light, but that information would not be made public.

Canada has fallen behind other developed nations in the number of shots administered per capita as supply disruptions derail planned vaccinations.

According to data collated by the University of Oxford-based Our World in Data, Canada now ranks 33rd globally, well behind allies like the United States and the United Kingdom but also middle-income countries like Poland and Serbia.

Canada’s vaccination effort has also been outpaced so far by those in Bahrain, Denmark, Germany, Israel, Italy, Malta, Portugal, Romania, Slovenia, Spain and the United Arab Emirates, among dozens of others.

The government, meanwhile, is under fire on another vaccine-related matter. Canada has opted to receive shots from COVAX, a vaccine-sharing initiative funded by wealthier countries to ensure low- and middle-income countries have access to shots.

In announcing funding for the initiative last year — Canada is among the most generous financial donors to the program — the prime minister said the country intended to draw on the COVAX supply to bolster the vaccination campaign at home.

But now some opposition leaders say it is an embarrassment that Canada is intending to rely on this program for additional doses. COVAX has said Canada will receive at least 1.9 million AstraZeneca doses from the program this year.

“People in Canada do not want this kind of decision made in their name. So we are asking for the government to either rescind this decision, or alternatively make up for whatever doses it has taken out by returning them to the COVAX facility so that our international neighbours can enjoy the same protection we do; so we can get out of this pandemic together.”

As the only G7 country slated to draw doses from the COVAX facility, Paul said the decision also harms Canada’s international reputation.